Roots on the Route

Take note of these numbers: 128, 29, 46, 246 and 94. The combination might not win the California State Lottery; but if you fancy yourself a wine connoisseur, they should be your California State Winery guide. They’re highway numbers — from north to south — for wine-tasting corridors in the appellations of Mendocino, Sonoma, Napa, Paso Robles, Santa Barbara and San Diego counties.

The newbie of the bunch, Highway 94 saw a boost in traffic after three wineries, usually open only on week- ends, agreed to keep their tasting rooms open daily from Thanksgiving through the weekend after New Year’s and coopted a radio ad to promote it.

About a mile and a half off the highway in Jamul, winemaker Sarah Babine led visitors through the varietals she makes with Grant Spotts for Granite Lion Cellars owner Joseph Knudson.

“We try to have a wine for every taste,” she said, noting there are 15 grape varieties planted on the property. Granite Lion bottles four white wines: Pinot Gris; Sauvignon Blanc; Chardonnay; and Melody Lane — a blend of Grenache Blanc, Vermentino, Viognier and Marsanne.

“For the 2014 vintage, we have Viognier from clones of Tablas Creek grapes,” Sarah said, referring to the Paso Robles winery dedicated to Rhone varietals.

“We were told that white grapes weren’t going to do well here because of the heat,” said Sarah, who has a background in chemistry. “But we like white wine, and nobody told Joe he couldn’t do whites. He wanted to have a full range of products.” This spring, Granite Lion is planting 3,500 vines on 3 acres to supplement the 9,000 mature vines on 5 acres.

Six miles down the road in Dulzura, Grant poured the wines he and Sarah crafted for Dulzura Vineyard & Winery, which sits on the former fruit-tree ranch established in 1885 by his great grandparents. What used to be the kitchen where his great grandmother pickled figs for a dessert sold commercially is now the tasting room. Cases hold artifacts, while a tabletop displays a book about life on the ranch written and illustrated by his grandmother’s niece.

“We’ve had two to three people deep at the tasting bar [over the holidays],” Grant said. “Everything seems to be selling.”

He echoed Sarah about white grapes.

“Everyone said it would be too hot for whites, that we wouldn’t get the fruit quality. The more we dug into it, we couldn’t come up with a reason for that. We are closer to the coast than Temecula.” 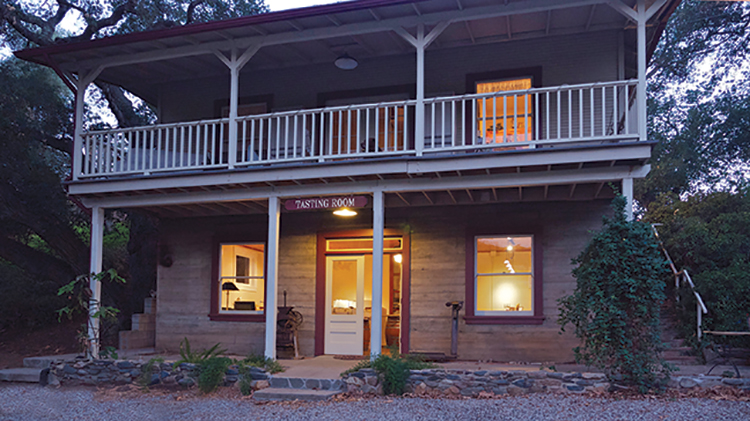 All of the Dulzura’s wines are 100 percent varietals from grapes grown on the estate’s 4 acres. They include Riesling, Viognier, Chardonnay, Cabernet Franc, Cabernet Sauvignon, Malbec, Zinfandel and Orange Muscat. Grant expects the 2014 vintage will be “stellar across the board.”

Just past the southernmost tip of Highway 94, past the turnoff to Tecate in Baja California, Bill Clarke greeted visitors to his makeshift tasting room for Campo Creek Vineyards, offering pours of Viognier, Merlot, Syrah and Cabernet Sauvignon, all of them 100 percent varietals.

Of the three wineries, his is at the highest elevation (2,400 feet, compared to Granite Lion’s 1,100 feet), evidenced in part by remnants of snow from a late December storm.

“The variety that really grows here that the University of California told my son to plant was Cabernet Sauvignon, and I think that it does just about the best,” Bill said of his 14-acre vineyards. “Syrah comes in next. Merlot is pretty finicky. The Viognier is really not that old; we need to get a handle on it.”

Most of the winery’s typical traffic is on Sunday afternoons when people are making their way home after visiting Tecate. Although Campo Creek is about 25 miles beyond Dulzura, the radio ad attracted new visitors.

“I was really surprised,” Bill said. “Why would somebody, if they have two other wineries closer together that they can visit, drive all the way out here? But they do.”

At an East County Chamber of Commerce roundtable luncheon in late January, Sarah, Grant and George Novinger, owner of Vineyard Hacienda (whose wines are available only to overnight and booked-event guests), discussed the need for directional/promotional signage and struck up a dialogue with a Caltrans representative. Chamber General Manager Eric Lund announced plans for a wine, beer and food tasting event to shine a light on the local entrepreneurs.

As Sarah put it, “The problem is that people don’t know about us. How do you define a wine corridor?”

By the end of 2015, three more wineries are expected to be in business: two in Potrero and one in Campo. For now, the pioneers are continuing their collaborative promotion through a website: thewineriesonhighway94.com.