Fired Up Over Clay

During last December’s Seventh Annual San Diego Pottery Tour, Richard Burkett sat at a potter’s wheel, sculpting cups, bowls and jars as he answered the questions of curious tour-goers in Nan Coffin’s back yard. The ease and speed with which he worked amid the distractions reflected his 45 years of experience.

Richard, who holds a master of fine arts degree in ceramics and teaches others the craft as a professor of art at San Diego State University, is one of the tour’s progenitors and Nan’s partner in Third Pottery.

“When I moved here 25 years ago, there were two or three really top-notch galleries that handled ceramics,” he says, adding that a focus on digital media caused a subsequent decline of interest in ceramics. “Now we’re back into a DIY era where people are starting to think about doing things themselves.”

Enthusiasm for ceramics in San Diego reached the point that Clay Associates in Normal Heights amassed a waiting list of three to five years for its classes.

“We have stopped taking names because it’s just too long to make people wait,” says Jerry Thiebolt, one of the nonprofit group’s nine members. “We have 110 students per week. We are crunched for room.”

“The basis was UCSD exten-sion classes,” he says. “La Jolla Museum of Contemporary Arts was hosting the classes, but then wanted its space back. They were going to set up classes on campus in Quonset huts. Rhoda Lopez didn’t want to teach in Quonset huts, so she took a second mortgage on her home and established a business of her own [Clay Dimensions] on Adams Avenue. “She took more advanced students and formed a member-ship for them so they could have 24-hour access to the studio.” After Rhoda quit, Eric says, the members took over and created a nonprofit to lease the building in the mid-1980s.

“We did it because if we could own a building in the future, that would secure it as a clay place,” Jerry says. “With individual owners, it could have been dissolved.” In 1992, the organization purchased a house on Adams Avenue that includes spaces for studios, displays of members’ work and, of course, kilns. All nine associates have 24/7 access, and three of them (Eric, Jerry and Shaun Craig) teach classes that provide the bulk of the group’s income. 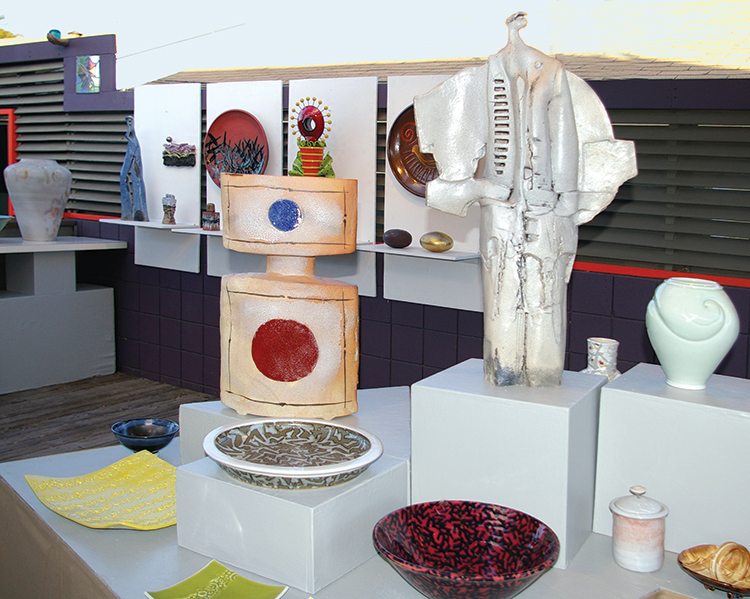 The rest of the funds come from monthly dues that cover the mortgage and from 25 percent of sales. Clay Associates holds two large sales, including works by members and students, for 10 days in June (beginning the first Friday of the month) and for three weeks in December, coinciding with the pottery tour.

There also is an annual fundraiser — open to those who donate $250 or more during the year — that raises money for upkeep on the property. Each associate makes eight to 10 pieces that get fired together. During the event, the kiln is opened and guests are allowed to select a piece.

Elly Dotseth and Sharon Patsko offer 24/7 access to their Get Centered Clay Studio in La Mesa to individuals who exhibit a certain degree of knowledge and skill with clay. The partners have reached capacity with 14 artists besides themselves using the facilities. But the studio also offers classes and on May 9 hosts a spring sale and open house during which visitors can try the pottery wheel and “get muddy,” Elly says.

The nonprofit Clay Artists of San Diego, which is open to anyone with an interest in ceramics, has about 150 members. “We organize two or three workshops a year and hold them in high schools,” says Merle Lambeth, president. The group’s website promotes exhibits of its members’ work, as well as other ceramics-related events, and lists studios and classes throughout the county. Members receive a monthly newsletter, may rent instructional videos from the CASD library, attend general meetings that include demon-strations and discussions about techniques, and join social activities that have included road trips and an annual Desert Burn Pit Firing in Ocotillo.
San Diego Potters’ Guild operates a studio and shop in Balboa Park’s Spanish Village and holds semiannual sales the second full weekends of June and November. Members may use the kilns for a fee and rent studio space to offer classes. They also man the gallery, which is open on a daily basis. Membership is limited to 45, with applicants juried in by an approval vote of 60 percent or more by its members.

The 2015 San Diego Pottery Tour runs Dec. 5-6. Thirty-five artists participated last year, each donating a piece of pottery for a drawing among passports that tour-goers had stamped at each stop. The number of tour-goers is difficult to track, but can be gauged in part by the fact that somewhere between 80 and 90 people entered the drawing by turning in passports stamped at all nine stops. Shaun believes the interest in ceramics is a “backlash” to a busy, technology-driven society. “Clay is so basic, and the making of pottery is so old,” she says. “It’s primal in a sense.” ❖