Every June, the view from Tony and Angie’s balcony changes. Their Del Mar hillside perch affords them a year-round view of car lights on Interstate 5. But when the San Diego County Fair rolls around, they also can see the midway lights and Ferris Wheel at the Del Mar Fairgrounds. Finding this .66-acre property took the couple two years; replacing its 1940s house with their custom contemporary home took another five and a half years.

“We were living on La Jolla Shores Drive in a contemporary Craftsman house,” Tony Chen says. “We had just had our daughter, and part of the impetus was to have more bedrooms and a little yard space.” 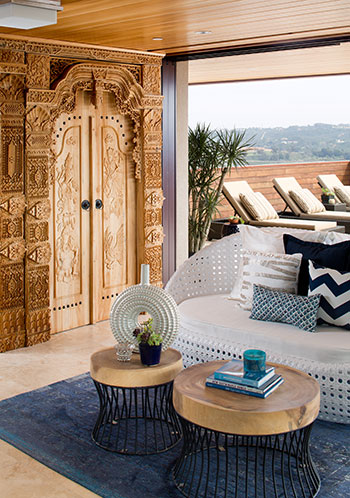 “This lot had great potential, with 180-degree views from the mountains to the [San Dieguito] river valley, [Del Mar] racetrack and ocean,” Angie Theis-Chen adds.

“They have a lovely neighbor whose viewshed we wanted to stay out of, and he was really nice to work with,” says architect Lew Dominy of Domus Studio. “It’s a hilly site, and we wanted to ‘nest’ in it. The architecture has a Frank Lloyd Wright Fallingwater feel to it.”

“We like Frank Lloyd Wright style with a long, horizontal vernacular. And we wanted indoor/outdoor living,” Tony says.

“We had a definite idea what we wanted, and this is exactly that,” confirms Angie, who has a degree in fashion design. “We collaborated on the entire house.”

“We are not classically trained,” Tony notes. “Lew gave us a general foundation of the space and we could fill it in to our aesthetic needs. It was a pretty big learning experience for Angie and me. We came up with a lot of ideas that wouldn’t work engineering wise.

“The house is as green as we could get it,” Tony continues, referring to photovoltaic panels, gray-water system, triple-pane glass, thermal flooring, cross-ventilation and other energy-efficient features. 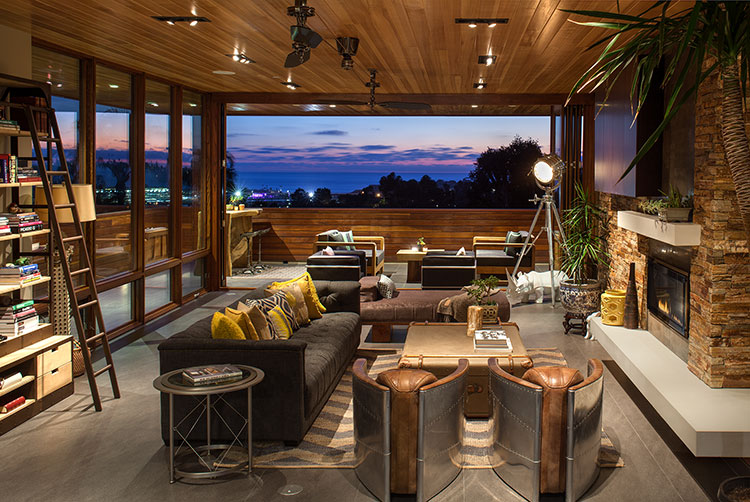 The deep overhangs of the cantilevered roofing keep the home protected from the heat of the sun while allowing plenty of light through walls of glass. Lew continued the hemlock ceiling through to the underside of the eaves for a seamless transition between interior and exterior spaces.

Hemlock holds up fine outdoors as long as it doesn’t get wet, Lew points out. He used ipe for the siding of expansive decks and copper for edging the overhangs.

“I love the patina copper gets,” Lew says. “It’s sort of a Japanese way of thinking — that something isn’t really beautiful until it’s been in place a long time.”

Beige stucco walls keep the home from looking dark and “woody,” lending it a more contemporary feel. Two stacked-stone walls around the fireplace and barbecue patio and a stacked-stone chimney for a master-bedroom fireplace provide a complementary accent, as do multiple cupped rain chains.

The landscaping by Ryan Prange (who, coincidentally, has named his business Falling Waters Landscape) mirrors the geometry, Tony says. “As you get farther away from the house, it gets more organic.”

Furnishings outside and inside showcase Angie and Tony’s ability to meld styles and materials. In the living room, a contemporary sofa pairs with 1920s deco, aircraft chairs and an oversized suitcase coffee table from Restoration Hardware. The room opens to a large deck with a bar made from one tree slab. The bar is one of many pieces they ordered custom made by artisans in Bali during a weeklong buying trip to the island. Six months after their expedition, the container of furnishings arrived.

“It was almost like Christmas,” Tony says. “‘Wow, is this what we designed?’ There were some surprises and some things that didn’t quite survive the trip.”

Among the furnishings were a table and chairs that fit precisely into the cozy dining alcove with a stacked-stone, wall-mounted fireplace at one end. Adding to the warmth of the space is the dark navy and muted gold ceiling hand-painted with a pattern that looks a bit Moroccan. A pair of cast-iron, barn-door trolley pendants hang over the table, while a surrealistic painting of mega-sized butterflies on towers in a field brings attention to the wall opposite the fireplace. The eclectic elements work surprisingly well together.

Across from the dining alcove, the setting changes to a modern kitchen (albeit with Restoration Hardware pendants inspired by antique naval lamps).

“We wanted the kitchen to have a modern feel, but we wanted it to be asymmetric,” Angie says.

While flooring throughout the house is mostly porcelain tile with river rock accents, the kitchen floor is santos mahogany with an ebony stain. The cabinets are walnut with a wenge trim; an L-shaped bar top on the island also is wenge. The countertops and waterfall island are white quartzite, and the backsplash is Angie’s custom blend of horizontal glass tiles.

A sink that includes an instant hot-water faucet sits in the island. A smaller sink in the back counter features an alkaline water maker used to clean fruit and vegetables, as well as provide ionized drinking water. Nearby is a Wolf module with induction cooktop, gas burners, gas grill and steamer. The kitchen’s other modern convenience is a built-in, Thermador espresso machine.

Dividing the kitchen and living room, two steps down, is a highly polished concrete, waterfall bar hiding a television that can be raised from the center. Tony met its craftsman, Jack Cooper, while riding the Coaster train to work. 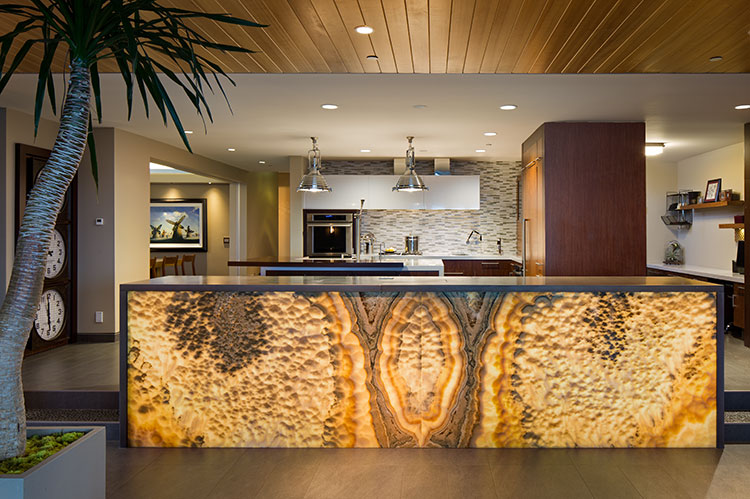 “We were both skaters,” he recalls. “He also did the fireplace mantel in the living room.”

Book-matched slabs of onyx — covering 18 feet by 4 feet — bring life to the front of the bar, which faces the living room. When lit, the black-orange-yellow glow reminds Angie of lava.

Down a short hallway from the kitchen lies a bathroom with a Moroccan vibe, courtesy of decorative tile, a hanging Moroccan lantern (several are interspersed indoors and out) and a bronze vessel sink on a carved chest, above which hangs a mirror from Bali.

The next space comprises a game room with a pool table, video game console, karaoke player and wet bar. Just outside is a small, L-shaped pool with an Acapulco shelf accessorized with a fountain featuring a Bali statue. Floating concrete steps at the end of the pool lead to a 400-square-foot guesthouse equipped with a three-sided fireplace, kitchen, and washer and dryer.

Back near the kitchen, stairs lead to the second story of the 4,650-square-foot house. A wavy, 3form panel covers the wall from the landing to the ceiling. Programmable lights send washes of color over the wall. Angie finds the wall conducive to meditation from her “Zen zone”: a cushioned lounge in front of a Balinese statue at the top of the stairs. Tony finds the lounge “a good place to tie your shoes.”

A river rock-lined hallway to the left of the stairway leads to Angie’s office and around the corner to a laundry room and 6-year-old Leighton’s play room, bathroom, bedroom and work station. 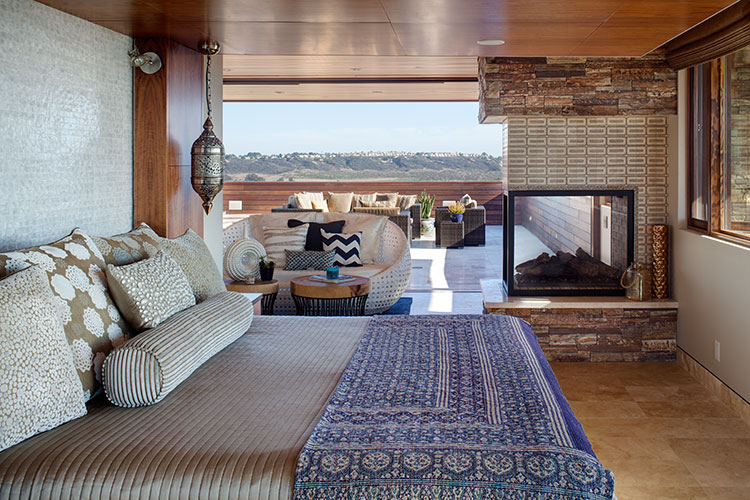 Tony and Angie’s personal space lies to the right of the staircase. Just inside the master suite is the most complex item they had custom made in Bali (the reason it took six months for the container to arrive). The intricate hand carving featuring Hindu deities surrounds the doorway and its wall. This piece and the tops of tables in front of the adjacent settee are made from suar wood.

A three-sided fireplace provides warmth whether Tony and Angie relax on the settee or in bed, which has a television that drops down from its walnut wood canopy. A wall of Maya Romanoff Mother of Pearl tiles replace a traditional headboard and complement a mother-of-pearl framed, full-length mirror from Bali.

Hemlock wraps around the ceiling, one wall and floor of a short hallway between the master bedroom and bath. Along the other wall, a lapis lazuli wet bar and cabinetry with a dishwasher and refrigerator provide amenities that make a trip downstairs to the kitchen unnecessary in the midst of a relaxing morning or evening in the master suite.

The focal point of the spa-like bathroom is a stacked-stone wall behind a freestanding tub in a bed of river rock. Behind the wall is a “walk-through” shower (Angie calls it “the people wash”) with dual body jets, rain showerheads and regular showerheads.

“It’s like a Balinese shower,” Tony says, adding that the open ends give it an outdoor feel.

More river rock is spread below the floating, macassar ebony vanity, backed by another Mother of Pearl wall and flanked by tall, rosewood cabinets. A makeup table near the bathroom entry matches the vanity.

As luxurious as the appointments are, one of the most compelling aspects of the master suite is its ability to expand by opening pocket doors to a 1,000-square-foot balcony. From here, the couple can see distant views from I-5 to the racetrack and ocean.

“In retrospect, we would have made the balcony smaller and the closet bigger,” Tony says.

“The balcony is bigger than anyone needs,” Angie concedes, “but it’s great for the Fourth of July and the Del Mar Fair.”