Some beachcombers unearth beautiful seashells along La Jolla’s shoreline. Sean Morgan made a more rare find after a morning surf: a flat, corner, residential lot two blocks from the ocean, newly for sale and prime for new-home construction.

As president of Redline Custom Contracting, he bought it quickly and recruited Tim Golba of Golba Architecture and Audrey Soldau of Bravado Design to transform the 10,000-square-foot lot from parcel to palace. A year-and-a-half of permitting and construction resulted in a light-filled, Hamptons-style, two-story home with high-end finishes, crisp nautical décor and views of the Pacific Ocean from the second floor and rooftop deck. 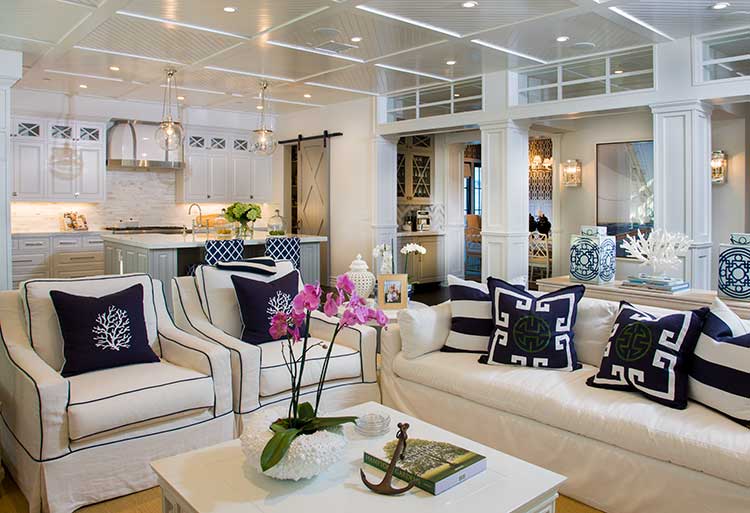 Jake and Kyndra Leach bought the 5,200-square-foot, five-bedroom/eight-bath home when it was little more than a foundation. Audrey knew, based on the blueprints, that it would be ideal for her longtime clients and their three children.

“It was a perfect fit,” she says. “They saw it and fell in love and that was it.”

Originally from the Los Angeles area, Jake and Kyndra have lived in San Diego’s coastal communities for about 11 years. They love sailing in San Diego Bay and jogging along the beach. Kyndra says they wanted to be able to walk to shops and restaurants, to be near their kids’ school and to provide space for their children to grow and play.

“This is what we were looking for, and it’s way better than we could have ever imagined,” Kyndra says.

Rather than building the home with traditional yards in front and back, Tim designed the home as an L-shape and set it back away from the street.

“The front yard is really the back yard,” he says. “It’s somewhat inverted, because we wanted to pick up the sun.” 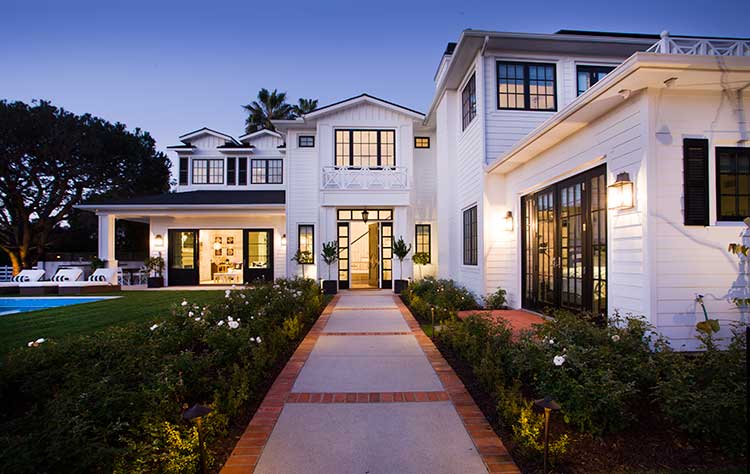 With city approval, the home’s access was shifted from busy La Jolla Shores Drive to a less-traveled side street. The new configuration allowed for a back driveway to a three-car garage, a front walkway paved with vintage bricks reclaimed from another of Sean’s projects in Bird Rock, an artificial-turf lawn with an established pine tree, an outdoor barbecue and dining area, and a 35-by-20-foot saltwater pool with a hot tub.

Jake and Kyndra were on board with the proposed design from the beginning. The floor plan made sense for the size of their family and how they like to entertain, and the planned finishes and fixtures were in line with their taste.

“I had already worked with them, so I knew their style,” says Audrey, who describes her personal aesthetic as “coastal preppy.”

The interior design would be similar to others Audrey had done for the couple in Carlsbad and Pacific Beach — “Although it’s more substantial,” Jake says 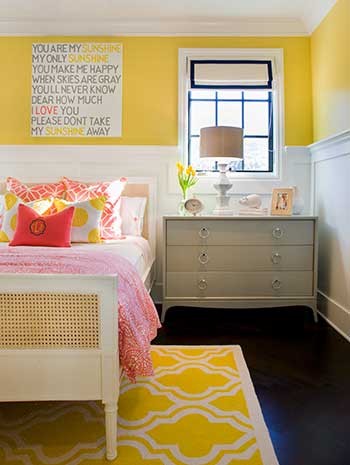 The home’s color palette inside and out is anchored by white, with touches of pale gray and a generous sweep of bold stripes in navy blue. Accent colors of Kelly green dress up the grownup spaces, while the children selected cheery accent colors for their own rooms. The daughter chose coral and sunshiny yellow; one son chose red and mint; and another son picked red, green and orange.

So much white in a house filled with three young children and a French bulldog puppy might give other homeowners pause, but Kyndra remains unshaken.

The finishes in the home were selected to be elegant and classic. The hardware and light fixtures gleam in polished nickel, dark oak floors are laid in a herringbone pattern, and built-ins and wainscoting are generously detailed. Brick and stone tile work throughout is configured in traditional patterns — from hexagon to subway style.

“I wanted it to feel like this was timeless, like a Jackie O suit,” Audrey says. “This house, if I came back in 30 years, would still feel like it’s modern. Yet with the brick and the herringbone, it also feels like an old East Coast house.”

The home is well ordered but has ample creature comforts. A temperature-controlled wine room for dinner parties with friends lies conveniently off the formal dining room. The kitchen features top-of-the-line appliances, including two Bosch dishwashers and a custom Ferguson range hood. A technology closet houses racks for security cameras and audiovisual equipment.

There’s a laundry room on each floor, including one with a custom dog wash, and each bedroom has its own full bathroom. The guest room even has a private entrance and a five-star view of the quartz pool.

“The details were important to us,” Jake says.  “My parents have already asked if they can just stay. They say, ‘Just leave a key under the mat.’”

After searching San Diego’s coast for their perfect home, Jake and Kyndra are happy to claim this prime spot near the beach as their own.

“We’ll be here forever,” Kyndra says. “I love it. My kids could get married here. There’s nothing else I need.”