Dr. Sketchy’s Anti-Art School San Diego may be campy, but that’s the point

Certain recreational pursuits must be taken seriously. Parachute jumping, motorcycle riding and life drawing may spring to mind — until you walk into The Merrow on the third Saturday of the month.

That’s where and when you will find a group of people who eschew the notion that drawing figures of a live model precludes distractions, casualness or (dare we say it?) fun. Music is playing, people are drinking and circus performer/aerialist Travis T is “clowning around” on stage. 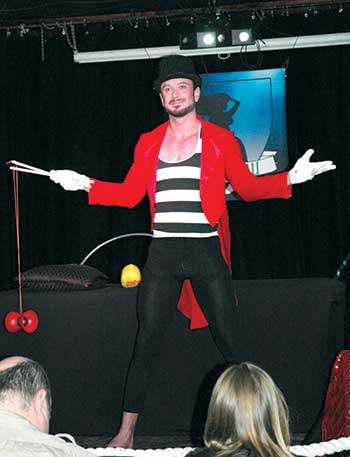 An art school dropout, Molly Crabapple founded the “alter-native drawing movement” in 2005 at a dive bar in Brooklyn, N.Y. She has since licensed more than 100 branches in 16 countries (including three in New Zealand). Nikki Haritatos, self-described “creative entre-preneur,” is the burlesque dancer/organizer behind the San Diego branch.

“I love unusual things,” says Nikki, who took over the reins in 2010 from Lily Jackson and Matthew Hohfeld, who launched the local Dr. Sketchy’s during Comic-Con in 2007. “Every branch has its own flavor. I happen to be quite rowdy, so that’s how my sessions end up being. But it’s all about having fun.”

Nikki had learned about Dr. Sketchy’s during a visit to New York and was told that there was a branch in San Diego. She and other members of her burlesque dance company (A Bit o’ Burlesque) posed for the San Diego crowd.

“We’ve had burlesque, samba and Polynesian dancers [as models],” she says. “Travis is a circus performer, but he also does a lot of burlesque.” So does Jacquie Witt, who teaches circus arts at Aerial Revolution and is a member of A Bit o’ Burlesque. After posing as a Dr. Sketchy’s model, she started working with Nikki behind the scenes. She also has a knack for sketching.

“I went to school for fashion design,” she says, “so my draw-ings look like fashion sketches.” Jacquie is quick to point out, however, that attendees need no drawing talent or experience. All they need are paper and pencils. Jacquie mentions one individual who brought an electronic pad and a computer for on-site editing.

The sessions, which attract about 20 to 50 sketchers, run from 3 to 6 p.m. and are broken into three sets. Poses can last from one to 20 minutes, and the models may change costumes during 10-minute breaks between sets. Each session has a theme, with drink specials and music fitting that theme.

Participating in contests (e.g., draw with your nondominant hand or, as during T ravis T i’s circus session, draw the model as part of a vintage poster) is voluntary. Contest prizes are “usually fun, silly stuff,” Nikki says, adding that some prizes are a little bigger and may include items like show tickets donated by the models.

Just putting the stage together is time-consuming, as Nikki dresses it with theatrical props. “My favorite part is to put it all together and make this an experience for everybody to enjoy,” she says. “And we never do the same thing twice.” Florence Gray, who attended for the second time in February, was an art major in college. “I work in HR, which doesn’t allow me to exercise much creativity, so I look forward to being able to make art in a social setting,” she says. “It helps me utilize my talents that are not allowing me to make a living.” 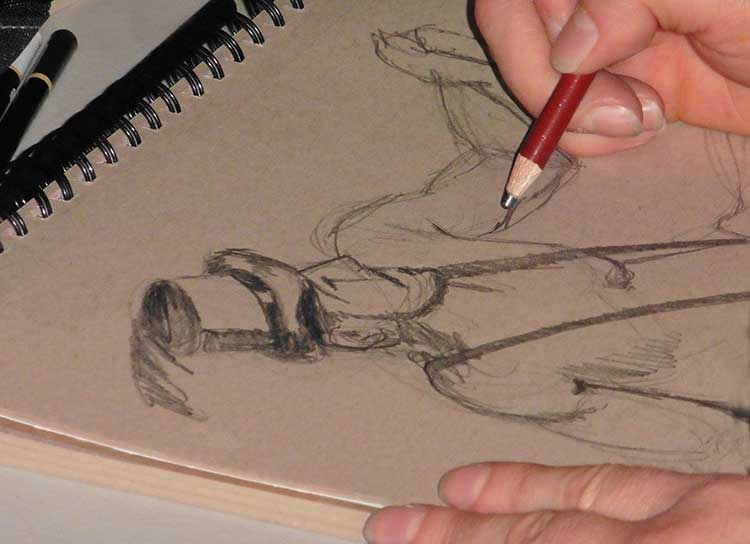 She finds “the momentum” of drawing with others helpful. “If I do it at home, there are lots of distractions,” she says. Jess Cohen, who attended art school and lived in New York before moving to San Diego a year ago, became friends with Dr. Sketchy’s founder Molly.

“I started going because I had a stroke and was having trouble with my vision and drawing,” she says. “I was trying to re-engage with my work. Going to Dr. Sketchy’s really helped me.

“It’s sort of tongue-in-cheek, which I really like. A lot of drawing classes are so serious,” Jess continues. “The idea [with Dr. Sketchy’s Anti-Art School] is that there is no judgment. Just enjoy doing it. The whole process of creating is more important than what you create. I would suggest it for anyone, artist or not, who enjoys having fun and doing something off the beaten track.”