“It was a perfect project for Mark to transfer to life away from being on the field every day,” Hilary says.

Mark, who played for the San Diego Padres from 2003 to 2005, left the Los Angeles Dodgers in 2009 and took on a consultancy position to baseball operations with the Padres. He and Hilary were living in Fairbanks Ranch with their two children when they bought a lot of just over 4 acres in Rancho Santa Fe and hired Friehauf Architects to design a clean-lined residence.

“The home is pretty simple, even though it is more a Santa Barbara/Lilian Rice/Irving Gill type of thing,” Craig Friehauf says. “Windows are deeply recessed, and there’s not a lot of ornamentation.”

The sloped site required terracing, with the house steps down from the front drive and the back yard stepped down from the house. The back yard also is slightly terraced from one end of the house to the other. Although the landscaping mixes hardscape and softscape areas while the interior flows with one shade of white and consistent materials, there’s continuity between the two in wide arches and limestone. 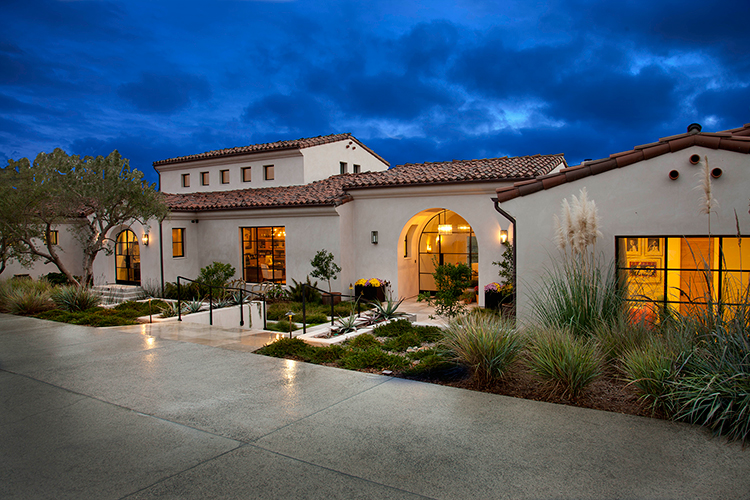 “We wanted the flooring to be very continuous,” Mark says. “All the outside is the same limestone as inside. The only other flooring we have is hardwood.”

“The living room in our old house was four times the size of this one,” Hilary says. “We wanted to create a more intimate living room.”

Though cozy, especially with a statement-making fireplace, the room feels light and airy, thanks to the high ceiling and the expanse of glass in a large, arched door flanked by windows that extend to the floor.

The corridor running across the front of the house appears even wider than its 6-foot span. Mark points out the absence of baseboards as one reason. Another reason may be the stretch of bare white walls and hallway décor.

“We are not afraid of open space,” Hilary says. “I don’t like over-furnishing a home. I think open space can be beautiful, and it lets the architecture come through. It distracts the eye the more you fill it.”

Many of the furnishings have been repurposed.

“I ‘flip’ things around all the time,” Hilary says, “and we recover things.”

She also places a few older pieces, some antiques, among primarily contemporary furnishings. In the dining room is a mirror that once hung in a French hotel. Sconces from the Victorian house in Illinois where she grew up used to hang over demilune tables now in the adjacent living room. 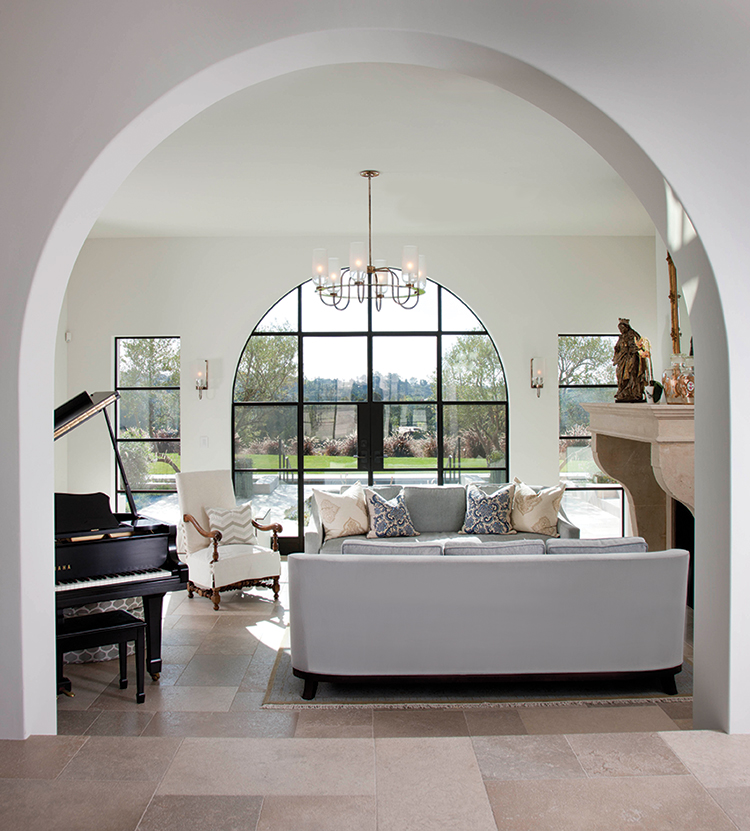 Mark’s office, in the front of the house, features built-in, white oak cabinets, an oak floor and framed jerseys from his stints with the Milwaukee Brewers, Padres, Boston Red Sox, Houston Astros and Dodgers.

Beyond the office, the hallway opens to what Mark and Hilary call “the gallery,” though the only piece yet on display is a Swarovski crystal Blossom chandelier with pale pink flowers. This space had been dedicated to a staircase in the original plans.

“Initially when we put everything on paper, we included a gym, bar room, theater and play room in a second story. Then we thought we wouldn’t use it and it was just too much,” Mark says. Getting rid of the upper level allowed Craig to enlarge the kitchen pantry area. He left in some height to “break up the roofline,” he says. Clerestory windows bathe the gallery in light during the day.

This wing of the house also includes a gym with a bathroom and an “art room” dedicated to school and play projects by Frankie (age 12) and Lucy (age 10), as well as to wrapping packages.

At the far end of the house is a mudroom. Moving toward the back of the house, the next space is a small play area for the kids and then a large family room, both of which have wood floors. A bar with a stainless-steel top is tucked into one corner of the family room. “I don’t like bars that are a focal point,” Hilary says.

She also doesn’t like the look of barbecues, so theirs is hidden from view on the back side of a stacked-stone fireplace that warms a covered patio just off the family room. 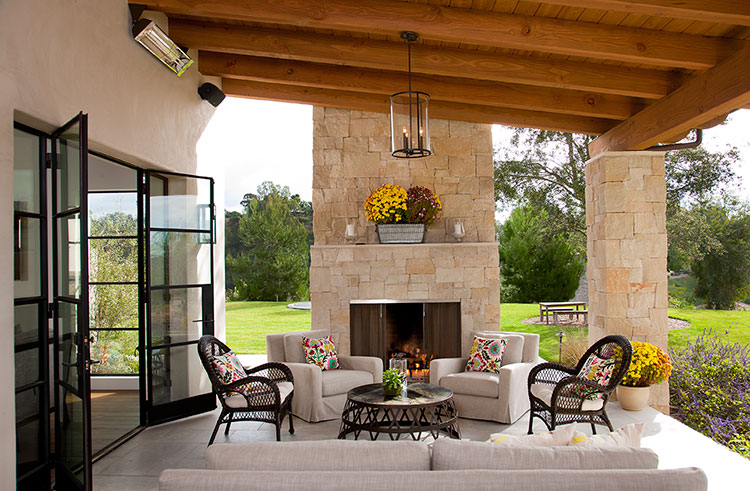 “Mark and I come out here a lot,” Hilary says. “We have coffee in the morning and light a fire.”

Inside, the family room opens to spacious kitchen with open shelves in place of upper cabinets.

“I rotate things on the shelves all the time,” Hilary says. That includes décor for holidays and birthdays. Countertops, on the other hand are bereft of appliances, bowls and other typical kitchenware. Stainless steel tops work surfaces under the shelves, while the 15-foot island is topped with honed granite that is mostly white with streaks of brown and gray.

Massive arched doorways with paned glass consume most of the exterior wall of the kitchen and offer a wide view to the back yard. Paned-glass pocket doors measuring 10 feet by 10 feet separate the kitchen and family room when sound is an issue.

“Hallways” on each end of the kitchen allow for a walk-in space with three side-by-side wine chillers on one end and, on the other, a butler’s pantry, home-electronics closet and the secret to keeping the kitchen clear: an alcove that houses a freezer, coffee center, sink, dishwasher, microwave, oven and cabinets. (The main kitchen area includes a double-oven Wolf range, refrigerator and dishwasher.)

The other wing of the house comprises the family’s more private spaces. Entry to this extension is marked with an unusual sight for such a clean-lined environment: carved-oak wedding doors from France with a woman’s face on one and a man’s on the other.

In addition to four bedrooms, each with its own bathroom, Craig included a study area with built-in cabinets just outside Frankie and Lucy’s rooms.

Set back on the lot, at one end of the swimming pool, is a guesthouse that has its own patio with a fireplace. Also on the property are a paddle tennis court, bocce ball court and a small vineyard growing merlot grapes.

The result of Craig’s work with his clients fulfilled what Hilary says was one of the couple’s goals:

“We wanted everything peaceful to the eyes.”