A Hillcrest garden maintains the historical integrity of its original designer, Milton Sessions

A Hillcrest home and its gardens share historical connections to Balboa Park, which is celebrating its centennial this year.

The 1935 California Pacific International Exposition in Balboa Park was only months away as five homes designed to showcase “modern living” rose around a cul de sac in what is now Hillcrest. One of them echoed the expo’s Spanish-influenced architecture that has enchanted park visitors ever since. 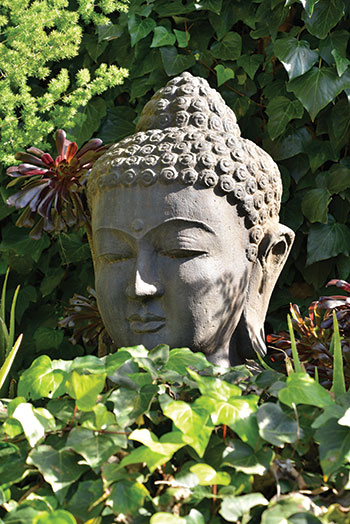 “My description of the house is eclectic Spanish, in the style of Andalusia. With all its chimneys, it looks like a village of many homes,” says Al Mazur, a retired commercial architect who has shared the domicile for 12 years with his husband, Rob Granat, a cruise industry veteran.

Designed by architect Ralph Hulbert, the residence features a terraced landscape by Milton Sessions, nephew of horticultural legend Kate Sessions, who was responsible for supplying much of Balboa Park’s greenery. Throughout his decades-long career, Milton championed water-wise gardens lush with California natives and other Mediterranean-climate plants.

Both home and garden needed extensive renovation when Al and Rob moved in. Six years of interior remodeling created cozy, art-filled living spaces with modern amenities. Outside, overgrown groundcover was cleared from the 2/3-acre property, with care taken to retain plants likely added by Milton. Hundreds of feet of stacked stone walls he installed also were repaired.

“We were determined to honor the spirit of the house and its history over the years, while making it comfortable,” Al says. “In the garden, we constantly asked ourselves, ‘What would Milton have done?’”

This month, Al and Rob are opening the refurbished landscape to the public as part of the “Gardens Then and Now” tour sponsored by two of the area’s largest garden groups: San Diego Horticultural Society and San Diego Floral Association. The tour honors the centennial celebration of the 1915 Panama-California Exposition in Balboa Park.

Visitors will be greeted by a majestic red gum (Eucalyptus) now more than 80 years old. Artfully laced to reveal its broad branches and peeling multicolor bark, it reigns above a streetside entry garden dotted with succulents. 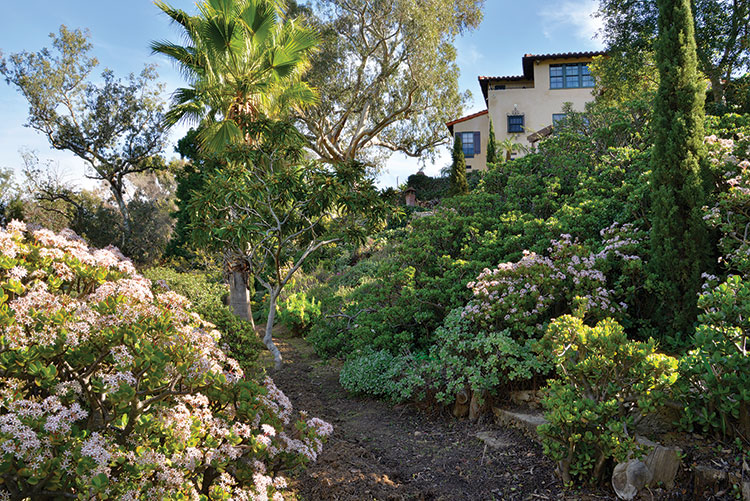 Hugging the home’s other three sides are a dozen diverse “garden rooms” that display the homeowners’ eclectic travel mementos, while embracing canyon vistas of soaring eucalyptus and palm trees.

“We wanted to have destinations with different purposes,” says Al, who has visited numerous Sessions-designed gardens around town. “Milton linked meandering paths to one location after another.”

Two areas closest to the house, both with refurbished brickwork, include what Al calls the “party patio.” A new outdoor fireplace and fountain, talavera-container garden and plentiful seating adorn this spot. Below it is a lavender-scented patio defined by an oval brick path, a tiered fountain and treetop views — all inspiring quieter conversations.

Steps past a garden gnome from Poland and a kinetic sculpture by Santa Fe artist Mark White are broad south- and west-facing terraces down to the canyon floor. They hold a new edibles garden, an open-air dining room the pair favors for alfresco lunches and a pet memorial garden edged by six stately palms and aloe rosettes. 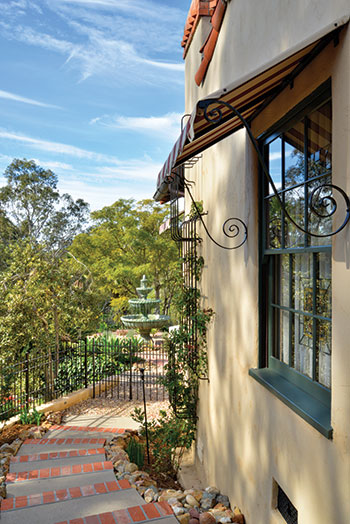 Here too is the “quietest private patio” with a pair of simple teak chairs guarded by two terra cotta warriors purchased on a trip to China.

“We often come down here with a glass of wine to watch the sunsets,” Rob says.

Shaded gravel paths along north-facing terraces pass thick-trunked jade plants from the Milton Sessions era and more garden accents, including a “happiness” temple bell from the Portland Japanese Garden in Oregon, a Buddha from Myanmar and a replica stone carving from a Cambodian temple that had to be lowered into place with a crane.

Among the greenery, old and new, are prized gift plants, like the magnolia grown from seed by the couple’s neighbor, Dollie Wilson, who has lived on the cul de sac since the 1960s.

“These and all the other contributions to the landscape and house,” Al says, “become connected to the spirit of this place we call home.”