Art for the Ages

Local nonprofits empower teens with education and outlets for expression

Melissa Inez Walker opened ArtHatch in 2004 to support and sell the work of emerging international artists and provide studio space for local artists. The 7,000-square-foot Escondido facility houses a gallery and 14 artists’ studios.

“At first, we had hundreds of teenagers come in to read art books and look at the artworks,” Melissa says. “They really related to the edgy work. So we decided to offer something for teens interested in a career in the art world.”

ArtHatch, which has adult resident artists, provides free studio space and unlimited art supplies for participants from 15 to 19 years old. Teens are paired with a mentoring artist and can attend monthly workshops for free. At the end of 2014, ArtHatch had 40 resident artists (including Melissa) and 25 students from around San Diego County in its teen program.

The mission statement for ArtHatch, which is registered as a 501(c)(3) nonprofit, states that it provides a forum for at-risk youth “to become familiar with and appreciate other cultures.” 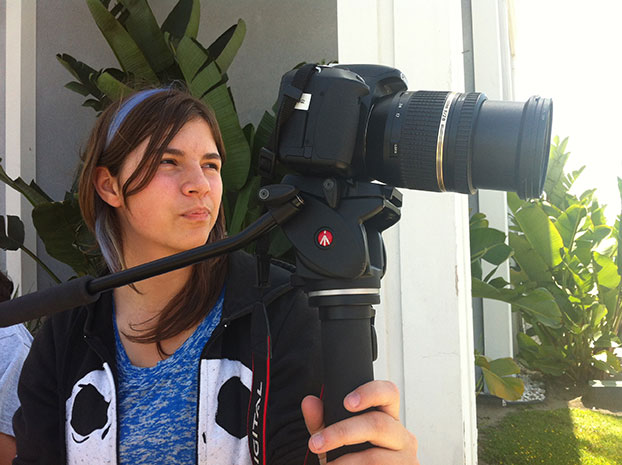 “I’d say all the teenagers are at risk,” Melissa says. “Many come from single-parent families that aren’t supportive of the kids’ interest in art. I love to watch their transformation, from being retiring and shy to being outgoing and excited about their work.”

Luz Ramirez, the daughter of Mexican immigrants, came to ArtHatch two years ago, when she was in middle school. Now she’s applying for college.

“Ever since I signed up,” she says, “I was treated as an artist, not as a teenager with a weekend hobby. I was taken seriously, and that was the best feeling. My experiences at ArtHatch have motivated me to continue creating my own artwork. It’s been a privilege to be part of such an amazing program.”

Established the same year as ArtHatch, Synergy Art Foundation was founded out of personal grief and in a passion for the arts.

“I lost a very close friend, an artist, in the Wildcat Canyon fire in 2003,” Naomi Nussbaum says. “And I started to investigate how many artists survived but lost everything.”

Thus began the all-volunteer 501(c)(3) organization, which provides emergency financial assistance to artists in distress. Synergy has issued more than 80 grants to individual artists and arts organizations to help them through a crisis. Some of the funding has helped provide cancer treatment for a visual artist, new teeth for a trumpet player and a knee replacement for a dancer.

Synergy also promotes arts education for at-risk populations. Last year, the organization teamed up with the Irvine-based Corazon de Vita Foundation, which supports orphanages in Baja, Mexico. At Rancho El Faro home for teens, girls were taught how to make decorative ceramic tiles that are marketed commercially in the Guadalupe Valley.

“This has been a phenomenal project,” Naomi says. “Hopefully, it will become self-sustaining.”

Synergy, which helped establish the East Village artist work/live Space4Art provided a grant last summer for a photographic exhibit, Focus on Imperial Avenue. During a three-week intensive photography course, 14- to 17-year-olds who had never been exposed to the art learned photographic technology and techniques, including field research. Their visual stories, highlighting the community, were printed on large banners to be exhibited at Space4Art in January and then installed along Imperial Avenue in the Barrio Logan neighborhood.

“We help kids tell their stories, which gives them a sense of empowerment and pride,” Ethan says. “They make documentaries about their issues and their lives.”

Housed in the Digital Gym on El Cajon Boulevard, the facilities include a tech center and 50-seat movie theater for screening independent foreign films.

Anais Bernard, who started at the Media Arts Center when she was 13, is now a freshman at UCLA majoring in film, television and digital media.

Another student, 19-year-old Magik Flores, wandered in two years ago wanting to learn about filmmaking so she could create a video on homelessness and sexual exploitation. The result, Truth, premiered at last year’s San Diego Latino Film Festival and earned her an interview on KPBS.

“I was a homeless youth from age 7 to 17,” Magik says. “One of my counselors at San Diego Youth Services suggested the Media Arts Center. I feel, in terms of my life’s journey, I was supposed to be there. My first documentary was like a spiritual intervention. Through my art and activism, I want to create change and help the next generation. I don’t want anybody to feel like I did: that nobody cared. I’m still struggling with my own personal growth, but I feel so grateful for the support I’ve gotten.”

THE ORGANIZATIONS – AND 2015 PLANS