Bath of the Year: Catchy Combination

The most arresting aspect of the master bathroom Lena Brion designed for Connie and Randy Malin in Rancho Santa Fe seems to be its subtle beauty. But a deeper look reveals that the room’s comeliness is combined with aging-in-place features that, as Lena puts it, “make their life so much easier.

“Lighting is always a key element to enhancing a space, and a big part of aging in place is providing illumination where you need it,” she continues. “There’s a cove light that goes all the way around the shower so that it’s easy to see what’s on the walls. When you open cabinets, the lights come on and you can quickly see what you are looking for.”

In a breathtaking approach to decorative lighting, LED lights behind the mirrors saturate the translucent frosted edges to glistening effect. Coupled with down lights that shine through glass shelves by the tub and up lights at the tub’s baseboard to emphasize the blue of wallcovering, the layers give the master bathroom dramatic depth and dip the room in an enchanting, soft glow at night.

“The way Lena layers lighting is absolutely amazing,” Connie says. “But the real hook she brought in for the bathroom was the Chilewich silvery blue wallcover. It grabs your eye and makes the whole space pop.” 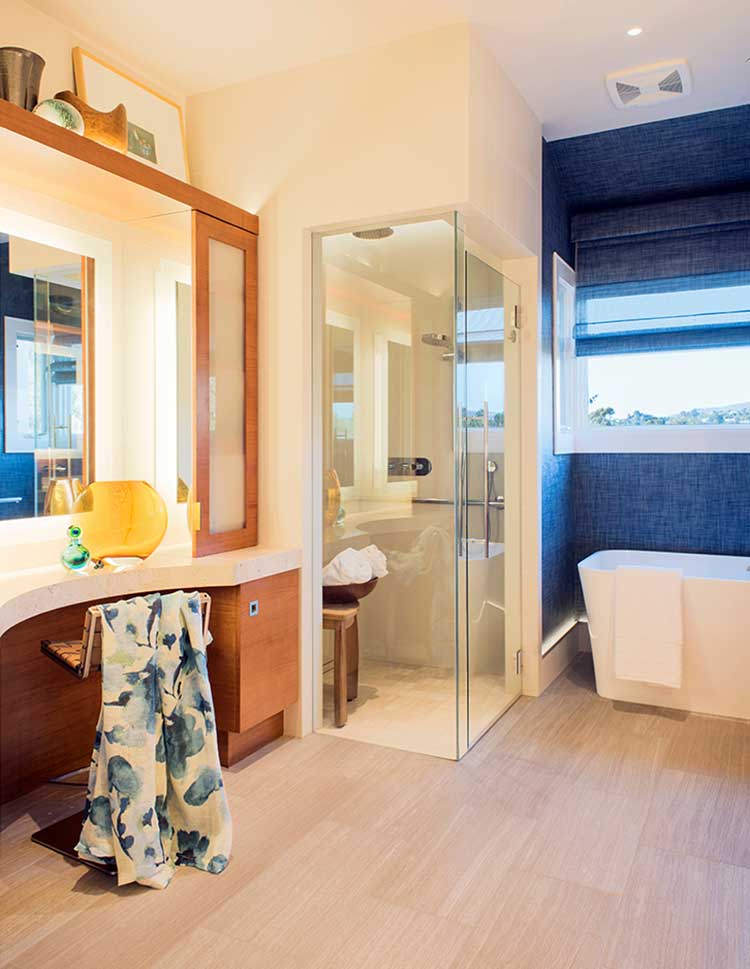 The woven-vinyl fabric was used for the window in a nonbacked version and on the wall by the new tub. The original built-in spa tub, in pink (“Everything was pink, including toilets and sinks,” Connie says), was massive with wide borders that were difficult to traverse. The new tub has smaller, softer edges. Made of a durable composite product, it keeps water warmer for a longer time. Next to the tub, the shower has a balance bar, securely attached to the wall under the controls.

“You can use it to drip-dry intimate clothes, but it also holds you steady while you’re standing in the shower and while you’re adjusting temperatures,” Lena says. “Also in the shower, instead of a built-in seat, we did a more useful, movable stool so they can move it where they need.”

A neutral palette in porcelain flooring, travertine countertops and mahogany-veneer cabinetry lend a traditional tone to the space.

“But because the cabinets are flush and streamlined, the bathroom has a modern look,” Connie says. “It doesn’t have the coldness of that real modern look, though. All that wood on the cabinetry adds warmth, which is what I wanted.”

The cabinetry also was designed to provide efficient storage, where items are most convenient to the user.

“The water closet has cabinets that tilt out for easy access,” Lena says. “The vanity cabinets are the perfect depth for storage, and there is pullout storage on the lower cabinets at arm’s reach when sitting.”

She also installed in-drawer power outlets that add convenience and provide a way to hide cords and minimize their impact on the master bathroom’s design. “As you’re aging, you don’t want to be fighting plugs,” she says.

The knowledge Lena gained working at the nursing home her parents owned, coupled with her knowhow as a designer, gives her an edge when creating dual-focus spaces that combine fashion sense with function.

“This was definitely an exercise in how to make a space beautiful and efficient,” she says.