Baths of the Year: California Calm

The new bathroom design exceeded Chris and Kristin’s expectations. Now it’s a place where they want to spend time.

Flower power was groovy in 1969. Perhaps that was the reason the master bath of Kristin Gillespie and Christopher Stayzak’s 1969 Point Loma home had walls slathered in floral prints. But in 2015, flower power, like the word groovy, has wilted. And although floral wallpaper still can be stylish, it sometimes doesn’t suit a sleek aesthetic.“My husband is an engineer who likes things clean-lined and doesn’t like anything froufrou,” Kristin says. “He doesn’t like knickknacks, and I really like things to be organic 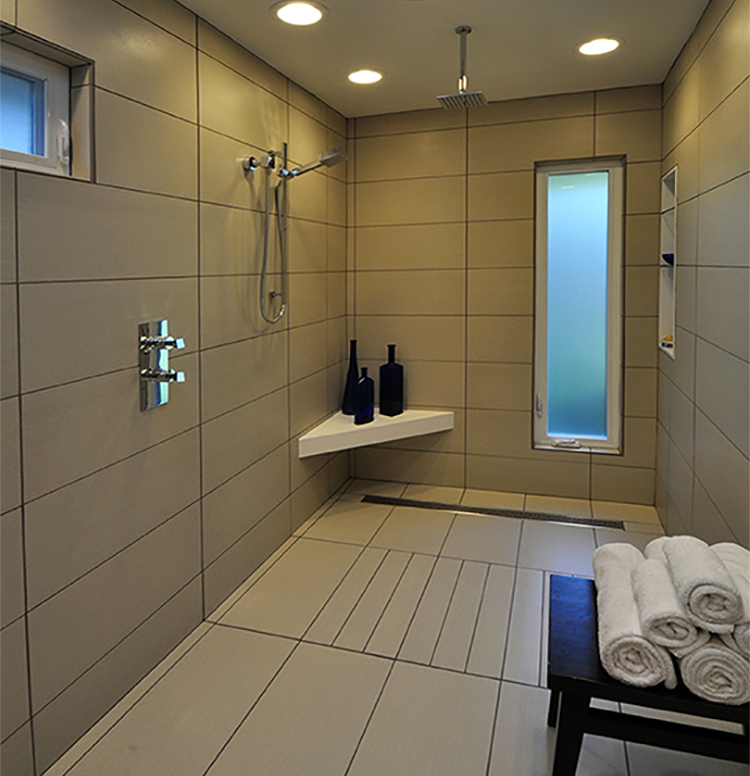 Additionally, there was a lot in the old bathroom that just didn’t work.

“The shower was dark, the hot water took forever to come out of the faucet and the fan didn’t get the moisture out,” Kristin says.

The couple knew they embraced a makeover that paired straightforward with functional, but it took designer Michael Chambers to help them hone in on their aims.

“Just like what everyone wants their home to be, Kristin and Chris wanted a respite — a getaway from the hustle and bustle,” Michael says. “But they also wanted a sense of California

From the floorboards to the ceiling joists, a California resort feel was created using a palette based on the California landscape, with soft taupes, olive greens and rich browns. Soothing colors, a symmetrical look, and natural materials like walnut for cabinetry and glass mosaic tiles for the backsplash infuse the room with a sense of calm.

“The focus is on serenity,” Michael says. “The flooring is an Avorio Moon porcelain tile that’s almost striated and has a sandstone look. That feel of the beach comes up the walls and is broken up by a misty green border of glass tiles, like the tide coming in. The walls have a glow representing a sunset.”

The position and intensity of LED fixtures and bulbs, along with the use of dimmers, took the bathroom from harshly lit and dingy to evenly lit and soft.

“The lighting also is practical,” Kristin says. “We didn’t want to walk in and stub our toes on things in the middle of the night, so we talked about basics like having a nightlight by the toilet and installing lighting under the vanities so you don’t have to turn the main lights on.”

Functionality was at the top of the priority list, but Kristin also craved openness.

“I’ve done a lot of traveling for business and spent a lot of time in different hotels, and I hate that claustrophobic feel when you walk into a water-closet room and you are literally in a cube. I knew I wanted something very open, so there’s no divider between the toilet and the shower.”

The new bathroom design exceeded Chris and Kristin’s expectations, she says. Now it’s a place where they want to spend time.

“At first,” Michael says, “they wouldn’t even use the master bath, because they didn’t want to mess it up. They felt like they were living in a model home. Chris would say, ‘That’s my favorite room in the house.’ To hear that kind of feedback is wonderful. You can’t beat that.”