With two Labrador retrievers in tow, Dana Saxten left behind country living on an acre estate in Rancho Santa Fe for a contemporary cottage just blocks from the ocean and downtown Encinitas.

“We had lived in Del Mar years ago, so it seemed natural to return to the beach,” says the restaurateur who owns Jake’s Del Mar and a dozen other restaurants in California and Hawaii. “Plus, my son, his wife and two grandkids live just one street over.” 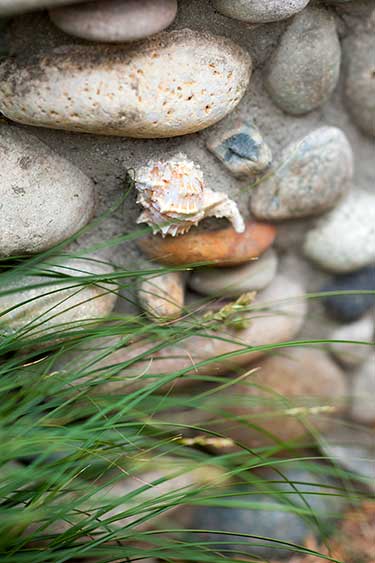 Front and back yards were little more than “patchy grass and a funky porch,” Dana says. “I knew I wanted something modern but nothing elaborate. I’m a quilter, not a gardener.”

Impressed by a project in Cardiff, she connected with its designer, Ryan Prange of Falling Waters Landscape, who describes her totally revamped garden as “beach contemporary.”

“There are nods [to the ocean] throughout to the setting, but nothing over the top,” he says.

Inside the gate, deep green sedge (Carex divulsa) forms a billowy meadow that sways and slumps as if buffeted by ocean currents. Adding to the under-the-sea feel are boulders brushed by coral-hued yarrows, agave and aloe rosettes. A giant artichoke seasonally thrusts purple thistles into the salt air.

Three young Mexican fan palms circled by blue fescue stand across the driveway from a scalloped ribbon of snow-in-summer that recalls foaming water lapping the shore. Around the corner, in a secluded side yard, a gleaming abalone shell holds soap for the new outdoor shower.

When her day winds down, Dana enjoys peak-a-boo Pacific views and neighborhood activity from a multilevel, redwood deck that wraps around the west and south sides of her two-story home. Other times, she relaxes in a rectangular soaking pool (“we call it a poolcuzzi,” she says) set in another raised deck in the back yard where Italian patio lights flicker at night.

Steps away is a dining patio made of concrete pavers separated by gray river rock that allows water to percolate into the ground. A nearby swale adds to Ryan’s goal to contain all irrigation and rainwater on the site. 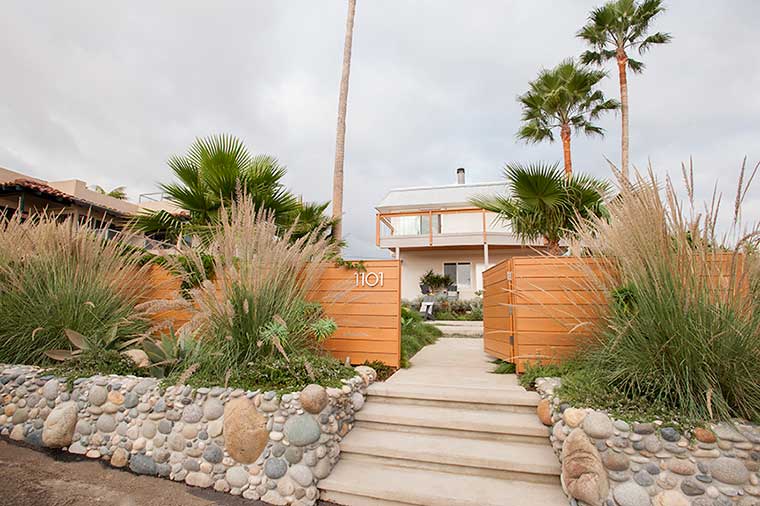 “One wonderful surprise was seeing the tea trees bloom all along the driveway with these pretty pink flowers,” Dana says.

Her desire to use front and back yards equally sparked the design of a custom fire ring crafted of beach cobblestones and tucked below the front deck, alongside the entry walkway of floating concrete pads.

“We moved the ring three times to site it right,” Ryan says. “We wanted it to be welcoming, not a barrier.”

Dark gray Adirondack chairs by Loll Designs here and on the front deck are favorite gathering spots, especially at dusk when the sky and garden glow. Mustard yellow accent pillows echo two mid-century Gainey Ceramics planters collected by Ryan. One holds a sculptural dracaena and the other a bold African aloe.

Whether gazing at the garden from her upstairs studio-office, splashing with her grandsons in the pool or savoring a quiet moment with her dogs, Dana relishes “city” living.

“I love being part of the vitality of life here,” she says.