Bottega Americano is the new restaurant and marketplace located at Park & Island in the burgeoning Downtown East Village neighborhood of San Diego. 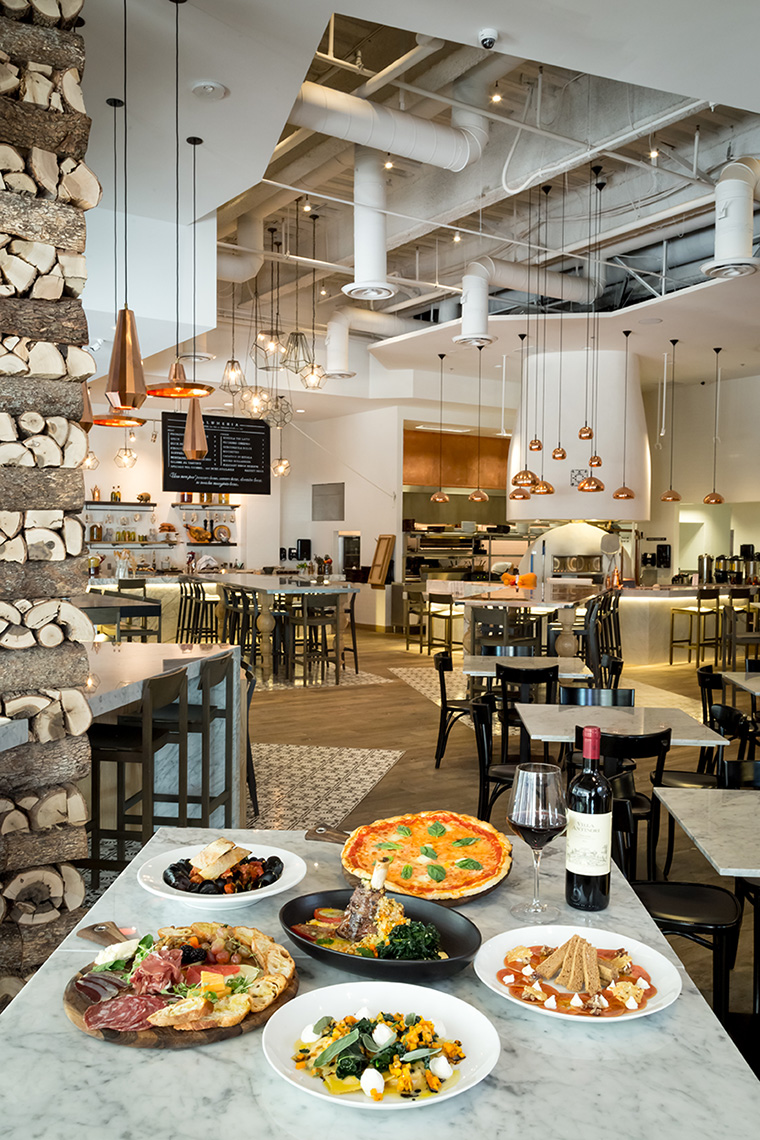 Located on the first floor of the Thomas Jefferson School of Law, Bottega Americano features several seating areas, a bar and a deli counter. The interior design is a tour de force by Thomas Schoos, the man responsible for the design of Puesto at The Headquarters at Seaport Village, as well as Seersucker and Herringbone. He is not a hold-back kind of guy; and the décor at Bottega Americano is sophisticated, edgy, and sumptuous.

Bottega is helmed by a foursome that includes Giuseppe Ciuffa, who operates the café at the Museum of Contemporary Art in La Jolla. If the concept was Ciuffa’s, then the partner who makes the most difference on a day-to-day basis is Executive Chef David Warner.

Starters are creative and distinctive, like hearty eggplant caponata, ricotta with honeycomb and persimmon, and the wonderfully creamy/tart scallop crudo with pickled mushrooms and butternut squash. Octopus is paired with bacon to terrific effect.

Among the entrées, a New York strip steak was as impressively handled as it would have been in a fine steakhouse. Crusty on the outside and intensively flavorful within, it was rich and first-rate. The same was true for a special of braised beef cheeks and an altogether impressive vegetarian dish of faro with root vegetables, broccolini and spinach.

Items requiring more attention from the kitchen involve sauces. Garganelli pasta (think of it as a large handmade version of penne) comes in a tomato sauce that combines lobster broth, garlic and mint. It is as odd as it sounds. The puttanesca pizza is sauced with every strong flavor in the kitchen, including a walloping emphasis on anchovies. Once again, it is a set of flavors that simply don’t marry well.

With that caveat, so much is worthwhile at Bottega Americano that patrons don’t have to be careful about what they order.

Patrons: The crowd is a combination of law students, people from the neighborhood, and hip folks attracted to restaurants of the moment.

Service: Some nights it’s efficient, other times it’s cursory; and some nights you wonder if it’s there.

Parking: The restaurant offers $7 valet parking. Otherwise you’re on your own to find street parking.

Noise:  Inside is very noisy. On patio, it’s highly civilized.

Special diets: Most everyone can find something to eat here.