A house on five acres in Jamul provides the most desirable setting for a painter and engineer.

As an artist,  Lou Anne Kromschroeder-Davis needs peace and quiet. The constant backup beeps from trucks in the gravel pit below the house
where she and her husband, Bob, were living interrupted the flow of creativity when she painted.
“It was a spectacular house,” she admits. But they put the solid adobe house near Mount Helix on the market and it immediately sold. Now Lou Anne and Bob Davis live on five acres in the Hollenbeck Canyon Wildlife Area. To reach their house, you drive to the tip of a long road in Rancho Jamul Estates and then follow a long, curved driveway to the front of the house, which faces a rock-studded hillside. Inside, the view through large glass windows looks out to the back yard, which in turn looks across rugged terrain and beyond to Mounts Helix and Soledad, the Pacific Ocean and San Clemente Island.
“The view is what got us into all this trouble,” Lou Anne jokes. “We thought this was a three-acre lot, because there was one graded area. When
we went to make an offer, we found out it was five acres.” “[The landscape] was reminiscent of what we grew up in,” Lou Anne says. “Bob and I both grew up in Bonita.”
The couple turned to architect Carol Wylie to design a desert-style home — “modern, but more Arizona modern,” Lou Anne says. “We wanted something that would be smart in the heat, that would not be worrisome in fires. And we wanted to build to suit the lot and take advantage as much as possible of the view.” While they relied on Carol’s expertise in architecture, Lou Anne and Bob lent their own skills to the project. Lou Anne was in the interior design business for nine years before pursuing a degree in art. Bob is an engineer with his own business.
According to Carol, the property was once owned by the well-known Daley family and had been graded into two levels before being abandoned. Looking at the resulting 12-foot vertical cut, she considered a design of two rectangles connected by a pie-shaped piece.
“That was the starting point,” she says. “Everything radiated out from the center.” Filled travertine tiles had to be cut to accommodate the geometry of the center point forming the foyer. 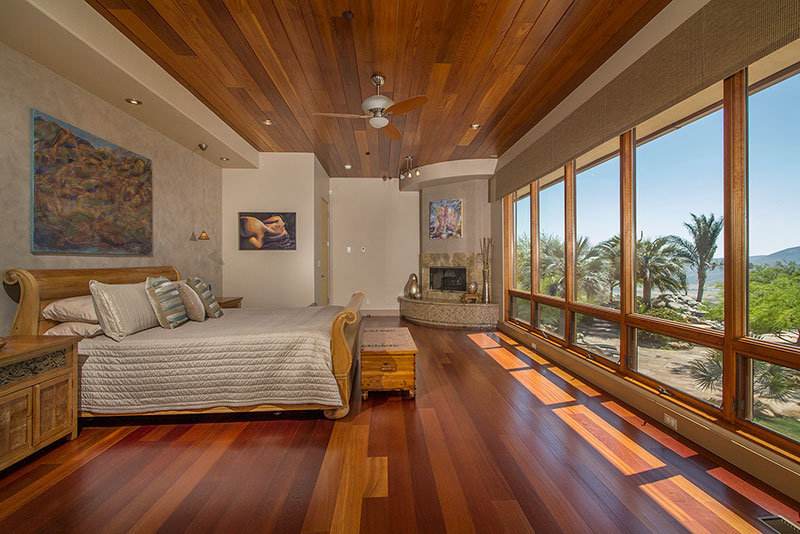 To the right of the Brazilian cherry entry door designed by Lou Anne is a glass block curved wall. To the left is a circular staircase around a large, glass tile-clad column of steel and concrete. Bob used his engineering expertise to design the floating stairs. Each wood-planked step tops a bed of concrete in a stainless-steel tray. The foyer also opens to the living room, where the radiating lines are captured in a Brazilian cherry floor and knotless cedar tongue-in-groove ceiling with sandblasted Douglas fir beams. A west-facing, curved wall of windows looks out to the back yard and view beyond.
“Lou Anne and Bob didn’t limit me on the use of structural steel to get this curving wall and expansive glass,” Carol says. In addition to glass, the home is constructed of Santa Barbara-finished stucco, slate tile and copper roofing. Copper “eyebrows” over the windows control sun exposure, as do remote-control shades and tinted windows.
No walls divide the living room from the kitchen, which features an oversized island with a cooktop and a raised bar that Bob engineered, using steel legs to give it the appearance of floating. A panel over the island provides a soffit to hide strip lighting for a halo effect. Ceiling lights and pendant lights over the bar provide more illumination.
“One thing I learned working with the lighting designer is that you can’t put in too much lighting,” Lou Anne says.
Natural lighting also enters the kitchen — not only from the living room and a kitchen window, but also from glass block- and window-backed cabinets on the exterior wall. 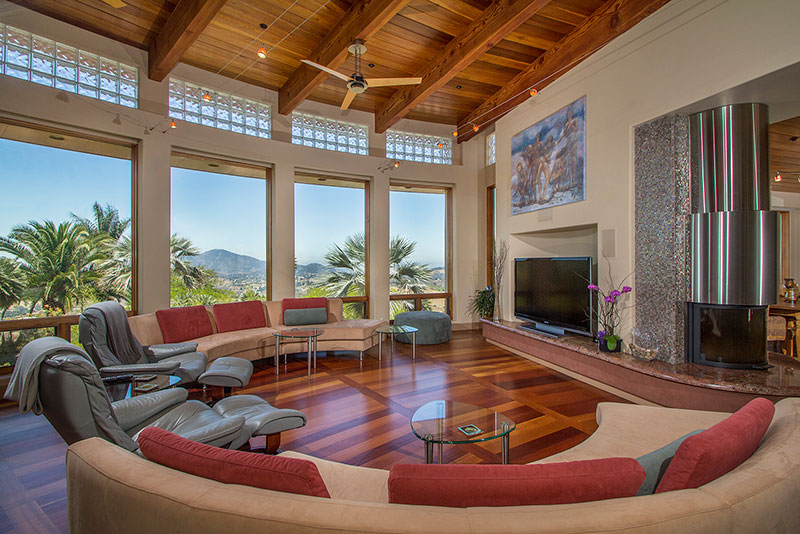 Copper and stainless-steel hardware dresses the beeswing eucalyptus cabinetry, and the granite countertops are distinguished with a double-thick bullnose edge that is squared on the bottom.
The pantry at the end of the kitchen does more than serve as a storage room. Standing at a countertop space, Lou Anne says, “This is the only thing Bob asked for: a pass-through window to the barbecue.”
On the other side of the living room, the wall features a low granite shelf that also serves as a hearth where it curves around an end fireplace. In the dining room beyond, the slanted ceiling echoes the pitch of the roof.
“Carol varied ceiling heights to define spaces,” Lou Anne says.
The powder room near the foyer reflects Lou Anne’s artistry by way of a wallcovering she made from torn construction paper that she painted to complement the bronze sink and copper sparkles in a black granite countertop.
“There are a million reams of wallpaper you can pick,” Bob points out. “But this is the nicest wallpaper I have ever seen.” Outside the powder room, track lighting snakes down a curved hallway to the south wing.
“I do not like to look down a hallway and see a door or into a bedroom,” Carol says. “I like to create niches and interesting things to look at.” So does Lou Anne, which is why she designed and helped install a mosaic shower in the master bathroom, under the leadership of artist Brennan Hubbell, who, with his father James, is known for incorporating pebbles and glass in amorphous designs.
“I told him I wanted a design that didn’t look like anything — just organic movement. I wanted it to look ‘rivery,’” Lou Anne says. There are more interesting things to view in the downstairs hallway that serves as a gallery for Lou Anne’s paintings. The lower level includes a family room and an artist’s studio any painter might envy, especially with the walk-in storage space incorporating storage racks for stretched canvases and completed paintings. 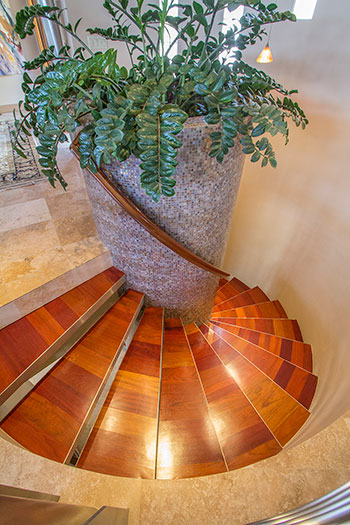 The downstairs also has its own foyer with a sapele wet bar topped with sparkleflecked granite (“I like bling,” Lou Anne says) and Baroque, textured-glass cabinet doors. Opposite the bar are antique chairs that, like other heirloom pieces Lou Anne has interspersed among contemporary furnishings, lend stylish eclecticism. French doors lead out to the back yard, which Bob and Lou Anne have designed with a mix of areas that includes a small, artificial turf lawn, an outdoor fireplace, a fire pit, a viewing deck, an infinity-edge pool and spa.
“We have had parties with 100 people and it seems like there’s hardly anybody here,” Lou Anne says.
Bob has worked with the natural rock and boulders on the property to create steps and walls. He also made a steppingstone path with flagstone. Among the garden areas are three owl boxes, one in which Bob mounted a camera so they can watch their avian visitors from a monitor in the house. The couple has added a solar panel and continue to landscape their property, but the house itself is a fait accompli.
“To be able to put together your own home is a dream come true,” Lou Anne says.