Inveterate collectors Bram and Sandra Dijkstra have spent most of their lives amassing art, literature, CDs and DVDs. Their extensive, eclectic collection of art includes more than 300 pieces, mostly paintings, though there are several works on paper and a few sculptures. It spans millennia, from the third century B.C. to the present.

Fifty of the couple’s paintings comprise the new exhibition at the Oceanside Museum of Art, Naked: 20th Century Nudes From the Dijkstra Collection, running through March 8, 2015. The show includes early paintings such as Charles Hawthorne’s Seated Nude (1921); a variety of early modernist works by artists such as Isabel Bishop, Jan Matulka and Julio de Diego; and California artists, including Belle Baranceanu, Ethel Green and James Hubbell.

“Our houses are going to be denuded!” quips Sandra, a native New Yorker and famed literary agent (she has guided the careers of best-selling authors such as Amy Tan and Lisa See). Fifteen of the exhibition paintings come from the Dykstras’ Del Mar home; 35 are from their Julian retreat.

The couple previously has shared with the public parts of their collection by loaning works to museums. Bram, a Dutchman born in Indonesia, is an art and cultural historian. A retired professor of literature and cultural history (40 years at UC San Diego), he has curated many of these shows and/or written their catalogs.

The art the Dijkstras collect features high-caliber national and international artists, but the couple also has enthusiastically encouraged the collection and purchase of works by local artists. Their own collection ranges from the enormous (70-by-110 inches) 1891 Scheherazade by Wilhelm Vita, court painter to Austro-Hungarian emperor Franz Josef, to small pieces, like a nude by local painter Dan Dickey, who was influenced by Picasso.

Paintings are hung in their home salon style, filling every inch of wall space. The proportion of nudes (about 15 percent) is borne out in their bedroom, where 20 paintings hang, four of them nudes, including two by Belle Baranceanu, a Chicago-born Romanian Jew (1902-1988) who spent many years in San Diego.

“Some collections focus on big names or genres or groups of artists,” Sandra says by way of explaining their aesthetic. “We just choose good paintings. We tend not to buy pretty paintings; we prefer strong paintings that make a statement. We like them first, then we research them historically.”

“They have to have soul,” Bram adds. “They have to speak to us. It doesn’t matter if it’s a robot or a cow [both feature in paintings in their home]. If there’s a unity to the collection, it’s our taste.”

Eight of their paintings were bought from the Metropolitan Museum of Art when the New York institution was deaccessioning. According to Bram, this occurs when a museum “reassesses its collection and gets rid of what isn’t up-to-date. It’s sad, but the good stuff will ultimately come back to the top. Then the museum will have to buy it back.” 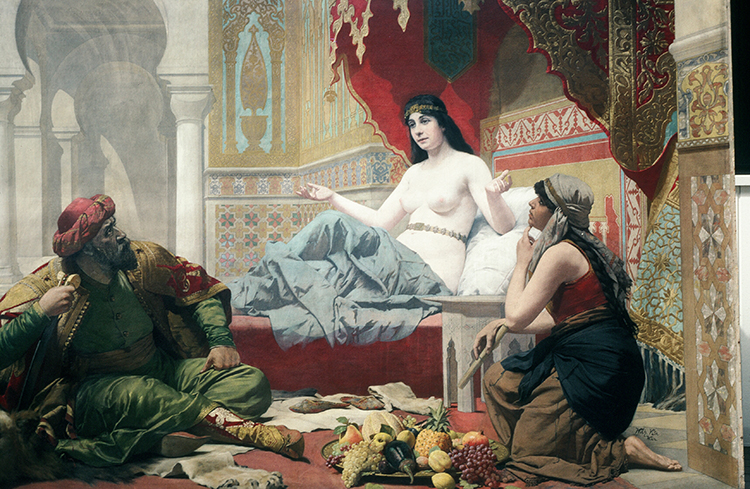 One of those former Met paintings is Ann by Alexander Brook. “It was painted in 1935, and it was very much appreciated in its time,” Bram says. “Brook was compared to Renoir and El Greco. But then, times changed.

“One of the reasons we have so many naked bodies around,” he continues, “is that people shy away from them. Many of the paintings we have were literally found in museum basements.”

In his essay accompanying the exhibition, Bram says he uses the word “naked” to mean “raw, stripped of all pretense — like naked emotions. But ‘nudes’ often hide uncomfortable details about the body and promote socially acceptable fictions about the human condition.”

He goes on to criticize the “rigorous Puritan ‘avant gardist’ attitude [that] has kept most of the nudes hidden from sight for the last 50 years.”

“We’re demystifying the nude,” Sandra asserts. “Historically, up until 1950, art students had to study and paint the undraped human figure as part of their training. But since abstraction came along after World War II, those artists saw representational nudes as vulgar” — or, as Bram puts it in his essay, “a vulgar capitulation to a prurient predilection for lowbrow realism.”

“The more you make nudity and sexuality unnatural,” he insists, “the more unnatural it becomes in people’s minds. One of the virtues of this show is the historical look at the evolution of style — the different ways you can portray a theme. It’s not a question of representation or abstraction. It’s a question of the use of different mediums or textures, the way an artist can use these techniques as a means to make a personal statement.”

The Naked exhibition is the second in OMA’s Collectors Initiative, which shines a spotlight on local collectors, private and corporate.

“This will be one of the major exhibitions in our young history,” says Daniel Foster, executive director of the 17 year-old museum. “It reinforces our priority of focusing on San Diego and California artists. I think it would make a great traveling exhibition, but the Dijkstras probably don’t want to live without their paintings for that long!”

As evidence of its importance, national art magazines such as American Fine Art and Fine Art Connoisseur are covering the show.

“This is one of very few exhibitions in the U.S. to focus on the nude,” Bram marvels. “My book, Naked: The Nude in America (Rizzoli, 2010) was only the second book presenting the history of the American nude.”

“It befuddles my mind that so few museums have the courage to focus on the nude,” Daniel says. He admits that he expects “quite a debate” provoked by the exhibition. “And I embrace that. Our role is to bring the debate to the public, and who better to instigate it than artists?”