Many years ago, I hopped on a bus with a bunch of other desert folk at the La Quinta Civic Center for a day trip to a sandcastle competition in Imperial Beach. A photo collage that I made from photos of the sculptures (not necessarily “castles”) hangs in the guest bath at my house in Palm Springs. Now a San Diegan, I encouraged four out-of-town friends to join me in IB for the Sun & Sea Festival on July 19.

One of those friends, Kathy, knows master sand sculptor Kirk Rademaker, who was hired by festival organizers to build the official “demonstration” sandcastle in front of the South Pier (shown above). If you like architecture, design, art or just enjoy being amazed, check out his website: kirkrademaker.com.

Kathy introduced us to Kirk while he was putting the final touches on his IB masterpiece. Quite a crowd gathered to watch and take photographs. In one of the conversations I overheard while Kirk was standing next to Kathy and looking at his work, a person asked, “What do you suppose he’s thinking now?” The other person replied, “He’s probably thinking, ‘Yeah, I did that.’” I’m pretty sure, had it been me, I would have been thinking (if not actually saying aloud), “Everyone step away from the sculpture and don’t breathe!” But when we asked Kirk how he felt about the fact that, after all his time and effort, even though his sculpture was far enough from water’s edge to be safe even at high tide, it was ephemeral. It didn’t bother him at all. I suppose if it did, he would not choose sand as his medium. Besides, the evidence was recorded in hundreds of photographs of people posing in front of his work (like the picture of our gang below, with Kirk third from the left).

We also enjoyed watching the 10 competing teams working on their beach installations. Our favorite was a train coming out of a tunnel, created by a team called IB Posse. The festival program claimed they had “the home court advantage,” but I think it’s really about concept and technique more than familiarity with local sand and water.

Our rooms at the Pier South Resort overlooked some of the installations, and we sadly witnessed their post-judging/awards destruction by kids climbing on them and leaving behind nothing more than piles of disturbed sand. For all we know, they may have been kids of the team members, because the builders watched with nary a care. So clap along if you feel like happiness is the truth.

In the evening, we walked down Seacoast Drive to Ye Olde Plank Inn. Their logo is a cartoon turtle wearing a sailing captain’s hat (like Gavin MacLeod wore in The Love Boat) and fringed epaulets (like Russell Crowe sported in Master and Commander) and holding a beer (I’m assuming it’s beer with a large head of foam and not a milkshake with whipped cream, because there’s no straw). Besides the turtle on the side of the building, YOPI distinguishes itself with pilings mounted on the lower exterior wall, Captain Morgan on the roof and a treasure chest on an awning. Inside, the ceiling over the bar is covered with $1 bills “donated” by visitors (including my friends). Word on the street is that Ye Olde Plank Inn can get rowdy as the night goes on; but at that point, we were already back down the street at the recently renovated Barrels wine bar and restaurant. If you go there, be sure to walk upstairs and check out the bottles mounted with their bases out, spelling “B-A-R-R-E-L-S.” Street level, we found a wood table that easily accommodated our group of six for dinner. The food and service were great.

Two more particularly noteworthy aspects of IB make me happy. One is the public art along Palm Avenue: referred to as an “outdoor surfboard museum.” Made from stainless steel tubes painted red and shadowed in stone on the sidewalk (see photo below), 25 installations commemorate surfboard shapes, including nine made by local board designers (there was a surfboard manufacturer in IB from 1993 until 2011). Inside each frame/shape is a circle noting on one side the year the shape was created and on the other its length and designer. Also on Palm Avenue is Seaside Candy (see photo below). Although I’m not a big fan of candy in terms of eating it, this shop charms me with its vintage accouterments (cash register, rotary phone, counter bell, apothecary jars filled with jawbreakers, etc.). A flat-screen television mounted high on one wall and surrounded by velvet drapes like a theater screen loops the Johnny Depp version of Willy Wonka & the Chocolate Factory. But the best part of visiting is getting all nostalgic over the plethora of candy: rock candy and Pixy Stix, Gold Mine drawstring bags of bubble gum pieces, candy charm bracelets, Sugar Babies and Sugar Daddy, Mallo Cups, Slo Pokes and Black Cows. Candy bars run the gamut from Abba-Zaba to Zero — with mid-alphabet choices like Mr. Goodbar, Oh Henry! and Pay Day, as well as my childhood favorite: 5th Avenue.

Bulk candy includes saltwater taffy and Jelly Belly jellybeans in an all-encompassing range of flavors. In taffy, there’s maple bacon for carnivores and huckleberry for vegans. In jellybeans, there’s 7Up and Dr. Pepper for kids and draft beer, piña colada and margarita for adults (even if they’re driving).

For those to whom color variety is more important than flavor variety, there’s a range of M&Ms to match any décor, including light and dark blue, light and dark pink, teal, silver and gold. And, like any truly worthy candy shop, there’s a case displaying blocks of fudge in different flavors.

Because I'm happy, I recommend visiting IB if you feel like that's what you wanna do. 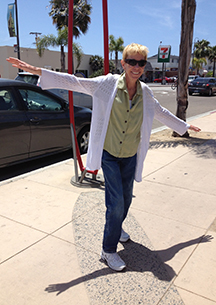 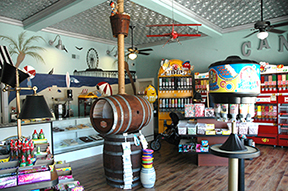 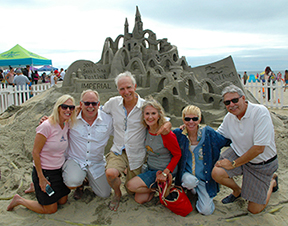