A Mockingbird is Not a Nightingale 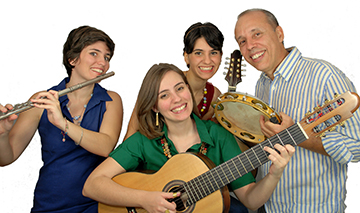 There’s a mockingbird in our neighborhood that does imitations of our phone ringing, our doorbell ding-donging and our alarm clock buzzing. To serenade us with even more tunes, he also steals trills, tweets, peeps and chirps from several other birds on the block. His repertoire just might be charming during the day, but since this little insomniac begins his litany at midnight and doesn’t quit until 5 a.m., his repetitive routine annoys rather than delights.

I was beginning to feel guilty that I was cursing a bird (after all, what kind of person doesn’t love birds?), until the other night when I was at a backyard choro concert in Kensington hosted by photographer Gary Payne and his wife, Zoraida. It was here that I heard the group Choro das 3 performing “Bem Te Vi Não é Canáro” (a bem te vi is not a canary). Apparently, there’s a bird in Brazil commonly known as a bem te vi, whose tune is so irritating that Brazilian musician Paulo Fasanaro found it amusing to illustrate that fact by giving one of his instrumental pieces this title.

Just like I’d never heard of a bem te vi, I’d also never heard of choro or the San Paulo group Choro das 3, a family quartet consisting of sisters Corina, Lia and Elisa Ferreira and their dad, Eduardo Ferreira. They’ve been playing choro professionally for 12 years, and they’re on a mission: to keep the choro tradition alive by getting other young people excited about it and spreading this music worldwide.

Like the original 19th century performers of this Brazilian folk music, they simply enjoy spontaneously playing their instruments — Corina, 25, on flute or piccolo; Lia, 22, on the seven-stringed guitar (to extend the bass range); Elisa, 19, on the mandolin or clarinet (she also plays banjo and piano); and dad on the pandiero (the Brazilian tambourine). By the end of each piece, they strum, drum and flute at such a dizzyingly fast tempo that they’re up on stage practically giggling with each other as they improvise to the choro’s rondo form (AABBACCA) while keeping up the pace.

Even though the music has basic European classical structure, the joy of its Brazilian, African, Portuguese and Spanish rhythms spreads to the audience. This music is fun, and the Ferreira family wants everyone to know what a delight it is. Eduardo is so happy that he’s whistling while he’s drumming on the tambourine.

If only my mockingbird could emulate that kind of elation. Then, even if this sleepless chirper kept me awake all night, I’d get out of bed with a smile that would match the beaming grins of Choro das 3.