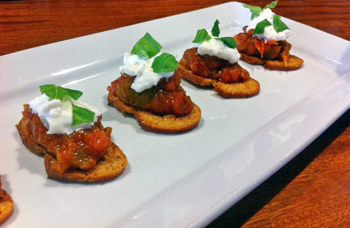 Light and refreshing, heirloom tomato jam and burrata crostini serves as a great dinner party appetizer. In San Diego, we can find wonderful heirloom tomatoes at farmers markets. “For this recipe, I look for as many contrasting colors as possible,” says Samantha Roach, executive chef of San Diego Cellars. “They really lend themselves to the jeweled look of the finished jam. I also leave the skins on for a little added texture.”

For the crostini
1 fresh French baguette, thinly sliced on an angle
Olive oil for drizzling
Kosher salt and black pepper for sprinkling

Combine tomatoes, vinegar, sugar, salt and pepper on medium heat in a nonreactive saucepan. Cook down the tomatoes, stirring occasionally until much of the liquid has evaporated.

Add thyme and continue cooking, stirring more frequently until almost no liquid remains and the jam is thickened and has a glossy appearance.

Remove from heat and chill.

While the jam is chilling, preheat the oven to 400 degrees. Line up baguette slices on a sheet pan and lightly drizzle with olive oil, then sprinkle with salt and pepper.

Bake for about 8 minutes or until golden. Remove from oven and cool.

For finishing, place a dollop of heirloom jam on the crostini, press down and nest a dollop of burrata on top. Garnish with the basil.