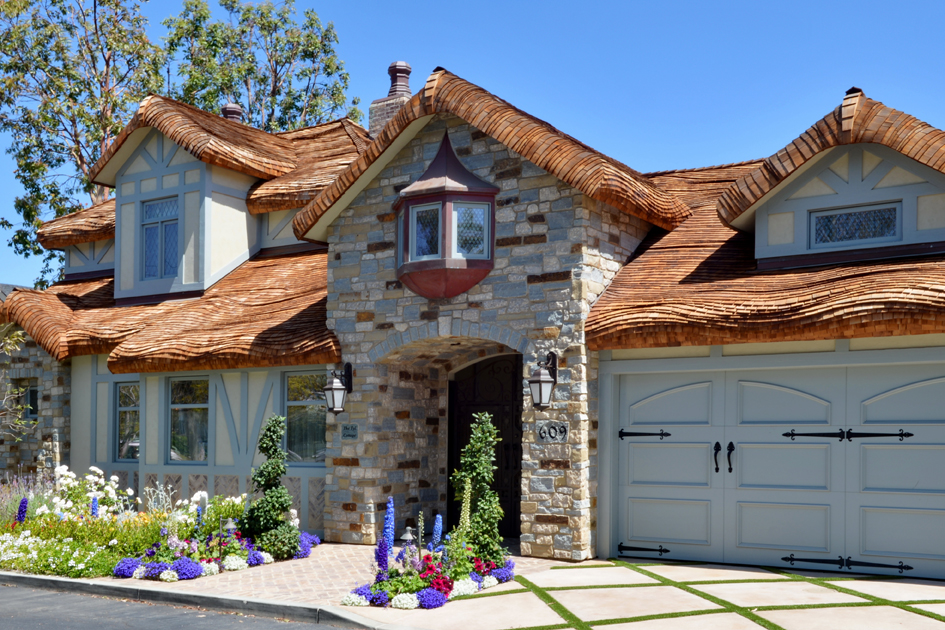 Along our shores, the word “cottage” most often combines with beach and conjures up something small and cozy. On the other hand, cottage style sometimes describes something as grand as architect Julia Morgan’s fairy tale Wyntoon for William Randolph Hearst or a Vanderbilt summer Newport mansion.

There’s something of both in a new Coronado home with a wavy roof sure to make the island’s visitors gaze in amazement.

Four years ago, interior designer Kristin Lomauro-Boom met with homeowners who requested a home that referenced English Tudor design with a cottage-style, curved roof thatched with cedar shingles. For this property right on the bay, the home design further needed to reflect the beach environment of Coronado. The homeowners’ fondness for nautical elements and antiques also came into play.

Thanks to sensitive interaction with the architect and builder and Kristin’s comprehensive attention to details and historical research, the result is a comfortable waterfront residence that lends itself easily to entertaining a steady flow of guests, children and grandchildren.

The three-level home and its two-story guest/carriage house are built around an inner courtyard with a swimming pool and a vine-covered trellis path. Its nearly 15,000 square feet includes eight bedrooms, 11 bathrooms, three kitchens and three coffee bars.

The updated California architectural version of English Tudor requested by the homeowners first came off the drawing board of architect/engineer Eric Fotiadi with the thick rolled-edge roof and a need for 40 tons of steel to support the home’s three levels, one of which is subterranean.

“The main rear deck of the residence, the back yard so to speak, is over the underground parking garage. It was designed bayside using structural-steel tubing cantilevering about 6 feet into the bay at high tide,” Eric explains. Standing there gives the impression of being on the prow of a ship while gazing across the water at the downtown skyline.

Builder Ron Nau and his team attacked the challenges of subterranean construction requirements on the water and the complexities of the roof. There are 2,300 square feet of subterranean living space, and the five-car garage is below the water table.

“It took us a year just to get the foundation in,” Ron says. “We dug down and put in seven pumps in wells, which pumped out 300,000 gallons of water per day.”

Once this Herculean effort got the water out of the ground, the pumps were closed off and the foundation built and sealed underneath. The water table then came back up. It’s like the house is a boat: floating but protected.

“The other challenge on this project was using materials that withstand the coastal weather and dry rot,” Ron says. “For the exterior, the larger beams are wood, but the half-timbered trim is either Azek or foam, coated in resin.” The stucco-like finish is a synthetic, rubberized kind of stucco.

“The undulating roof is the most unique element,” Ron says, noting that it took three and a half months and “real artists layering and rolling,” as they hand applied each of the steamed cedar shingles.

“I was able to be involved with so many design decisions, and the Nau Builders team made my visions become reality, from the exterior stone and iron work and copper chimney caps to every inch of millwork on the interiors,” Kristin says. “This was an amazing opportunity for me to release my inner architect.

“My husband and I travel to Europe every year, which has influenced my design style and appreciation of true craftsmanship — experience I used for this project. For example, detail on some of the cabinetwork was taken from a home we rented in France, and the stone layout on the exterior came from a bridge in Holland I had photographed.”

The bathrooms and kitchens (one of which is a catering kitchen) are designed with different tiles, hardware and fixtures that emphasize the several themes in the house. The coffee bars, essentially mini-kitchens, are on every level and include full-size refrigerators and dishwashers.

The main level most truly adheres to the English Tudor style, with diamond-paned windows and Gothic arch details in railings and on the kitchen windows, refrigerator face and large ceiling medallion over the dining table. Kristin employed rich tones of blues, reds and greens. The painted woodwork is high gloss to reflect the waterfront setting. Custom hickory floors make the large spaces warm and inviting, and fireplaces can be lit in all the main living spaces, including the kitchen.

The upper level is more casual, with a nautical flavor blending with the Tudor. Built-ins are an admiral blue with brass campaign hardware on every corner and an antique captain’s bar and binnacle, brass lamps and other details carry on the theme.

The ceiling is a truss structure of massive Douglas fir beams. A motorized door opens to the large veranda overlooking San Diego Bay that is sheltered from the wind and has a motorized awning overhead to control the sun. The sheltered gazebo at one end repeats the Tudor Gothic arch details and the thick, rolling edge of the roof.

For all its adaption from past centuries, both the interior and exterior have been realized with a light, bright California palette. Several shades of pale blue, persimmon and sunny yellow cheer bedroom walls. Classic nautical blue and white stripes and floral and geometric fabrics make the interiors anything but somber.

The lower level of the home contains a media/game room with jukebox and images of 1950s-era, Hollywood movie stars on the walls. A triptych of Audrey Hepburn from Breakfast at Tiffany’s is wittily encrusted with real pearls.

The two-story guesthouse evokes a Nantucket aura with its paintings, fresh coral and blue palette, and basketwork hardware.

One guest called the residence, “The house with seven personalities.” That may be an exaggeration, but experiencing the home is a nostalgic journey through several design styles that live comfortably together. Just being there provides a sense of wonder and endless fun.