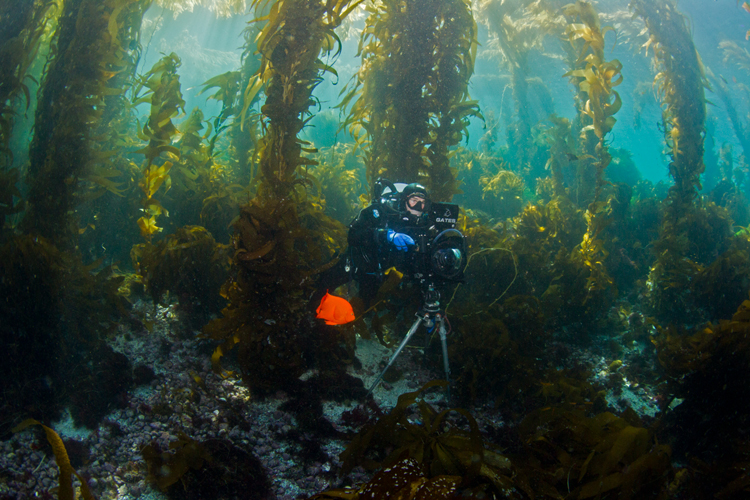 The Del Mar home of Howard and Michele Hall sits under a giant pine on the crest of a Del Mar hill. With a view of the ocean, the dark wood-clad house seems the ideal serene environment for the couple, who travel about 150 days a year.

A framed photograph of a polar bear and cub in the Arctic, taken by Howard, hangs in the entry hall over an antique binnacle — a waist-high navigating instrument that looks like a diving helmet on a wood stand with outstretched arms of iron balls.

Howard and Michele shoot and sell stock photography and video. Their films have been shown on PBS’ Nature and on the National Geographic channel. Between them, they have won seven Emmy awards.

Journey to the South Pacific, an IMAX film at Reuben H. Fleet Science Center in Balboa Park, showcases their filming deep in the waters of West Papua and the Coral Triangle.

“I don’t try to make ‘art,’” Howard says. “The environment is beautiful enough. This is documentary that is entertaining. I don’t try to interpret.”

Try or not, ‘art’ is precisely what Howard and Michele achieve. An environment may be beautiful, but capturing that beauty in all its glory for everyone to enjoy takes skill, commitment. And, like true artists, Howard and Michele follow a path of discovery and a desire to communicate to a broad audience.

“I like socially responsible films that encourage good behavior,” Howard says. “I had an early, short-lived Hollywood career as a stuntman for a series called Man From Atlantis. I had lots of fun, but I realized we weren’t making anything of value. Making wildlife films allowed me to dive in places no one had been and explore and discover.”

Howard and Michele are longtime San Diego area residents. Howard earned a degree in zoology from San Diego State University. Mostly self-taught as a diver and filmmaker, he was teaching scuba diving when Michele, a registered nurse with a health sciences degree, signed up for lessons. Now the husband-and-wife team travels the globe to film for their own Howard Hall Productions and television and IMAX projects.

Howard shoots underwater with an Epic Red video camera with 5K-resolution capability. It takes a team of 12 people to handle one camera. Each roll of film lasts only three minutes, so the camera has to resurface over and over during underwater filming. One production can mean using 5,000 pounds of film.

“My deepest dive was made during the making of the IMAX feature Coral Reef Adventure, when we operated cameras as deep as 370 feet,” Howard says. Those dives were made with a closed-circuit, mixed-gas rebreather. But instead of the usual mix of nitrogen and oxygen used for dives up to 200 feet, helium was added to minimize the danger of debilitating nitrogen narcosis.

“I’ve made dives up to six hours, but the usual is two and a half hours underwater,” Howard says.

Michele takes the underwater still images with a Canon 7D in Nauticam housing.

“I dive with standard open-circuit scuba gear,” she says. “If I’m going to dive deeper than 60 feet, I breathe a mixture called Nitrox, with more oxygen and less nitrogen than the air in our atmosphere. I’ve dived as deep as 180 feet. Once was during the making of our television series Secrets of the Ocean Realm in Belize.”

These days, most of their projects are on IMAX films, produced and directed by various companies and shown in theaters throughout the world.

“I’ve dived under the North Polar ice cap, but never been to Antarctica,” Howard says. “I’d like to make a few dives there.

But first, he’s headed not quite so far south.

“We’re in development again with [Journey to the South Pacific filmmaker] Greg McGillivray on a film about the Sea of Cortez,” Howard says.

Far-off, exotic locales make most lists of the world’s best diving spots, but Howard and Michele enjoy exploring in their own back yard. Their favorite place to dive is “Southern California on a great day.”

“Unfortunately, great days of clear, calm water are not common,” Howard adds. “But when conditions are good, the California Channel Islands offer diving that is second to none.”

As Duke Ellington said, “Art is dangerous.” That could be said especially of Howard and Michele’s pursuit of capturing the underwater world. But Howard dismisses the notion.

“The only danger is being on the boats,” he says.

Apparently, once in scuba gear, the couple are like fish in the water.