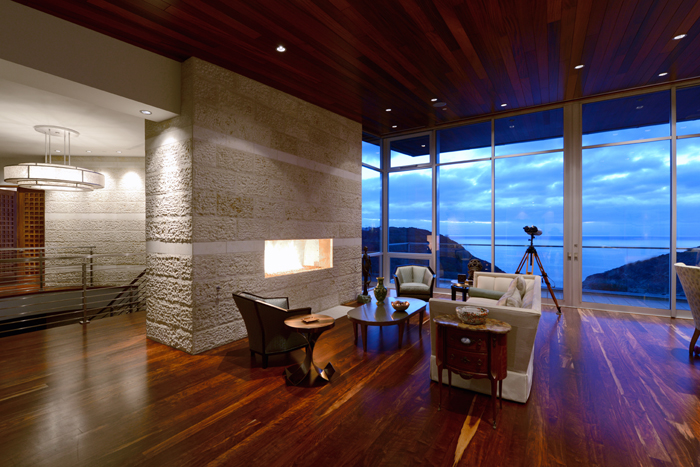 Many coastal dwellers get to peer out upon sea life, boats and surfers, but the owners of a house above the cliffs at Black’s Beach in La Jolla have the added entertainment of paragliders. The V-shaped canyon at whose head their house sits creates an updraft ideal for winged flight.

“The canyon is a preserve and the knoll to the left is owned by University of California Regents,” Rick says. “We don’t have any risk of our view really changing ever.”

According to architect John Jensen, Rick and Carol had been living in a Spanish-style house on the property for 10 years and wanted something “new and fun.” For that, they turned to John and general contractor Greg Agee, who had built a house for them in Poway 15 years earlier.

“We had rough ideas,” Rick says. “We knew how we wanted the house oriented and where rooms should go. We wanted a contemporary house, and we wanted it to be a very functional house in the sense that we didn’t want it to be difficult to maintain, with strong surfaces as much as possible. But we also wanted it to be very warm.”

The pivot front door, 5 feet by 12 feet, with pillowed mahogany panels and a wide door to the courtyard, were custom made by Jensen Door Systems, owned by John’s brother. The wood balances the dominant material used inside and out: bush-hammered and flamed Jerusalem stone that came from Israel in three shipping containers.

“One of Rick and Carol’s requirements was that anything on the exterior had to be indestructible,” John says. “The roofer suggested titanium, which is nonoxidizing. He said he could get a good deal if he used it on two homes. It didn’t cost too much more than copper and it’s dimensionally stable, so it doesn’t expand or contract.”

The edges of the deep overhangs in the front and back of the house curl up to “lift” the block structures — evocative of the air keeping paragliders aloft.

“One of the architectural features that we really like are the wing roofs,” Rick says. “From the family room, which is where we spend most of our time, it looks like the slanted roof is just floating on glass. It’s interesting and beautiful.”

The ipe undersides of the overhangs extend into the house, marrying the exteriors and interiors in the same way as the Jerusalem stone.

“We selected the stone very early on. That was one of the hallmarks. In some cases, we also used it as a lighting element. There’s a number of lights that face the stone, so in the evening it is lit up.”

John incorporated slits into the stone, as well as a concrete wall in the back portion of the house “to make solid less solid,” he says. Two gaps in the exterior wall supporting floating stairs from the upper to lower levels of the back yard serve as spaces for sheets of “rainfall” to fill an infinity-edge pool of water. The glass-tile surround on the water feature matches that of the swimming pool, which has infinity edges on the house-facing and canyon-facing ends.

“The combed with flat squares of precast concrete make a checkerboard pattern that is fun and adds texture,” says Susan Spath, who designed the hardscape as well as interiors.

While the back of the house is replete with glass to capitalize on the view, John mimicked the vertical columns of stone between glass in stone pillars that serve not only as deck supports but also as visual cues from inside.

“I am a big fan of putting foreground in the view,” John says. “Look at a painting. You need things that frame the view. So the views from different windows are different, because they are framed differently.”

Another primary element in the design is what John calls the “inside-out perspective.” Glass pocket doors allow an unfettered east-west view, as well as the ability to create one large space for entertaining — incorporating the balcony on the ocean side and a courtyard on the opposite side.

“When it gets breezy, we leave the west-facing windows closed and open everything else,” Rick says. “We have dinner in the courtyard a lot. You can see the ocean looking through the house, but it’s very protected.”

In addition to their desire for an outdoor space that can be enjoyed despite ocean breezes, Rick and Carol made low maintenance and low energy use a priority. The latter is provided by a solar array, solar water heater, abundant use of LED lighting and window shades that are thermostatically controlled through the home-automation system.

With two teens living at home and a standard poodle with run of the house, Rick and Carol wanted simple and durable materials in all the design elements.

“We go through cycles of buying beautiful furnishings and then it’s just a nightmare to take care of, and that’s not what we wanted,” Rick says. “We didn’t want to have to treat our house with kid gloves.”

“The house is clean without a lot of fussy details,” Susan says. “What is there is substantive — from the Jerusalem limestone that travels indoors and out to the beautiful exotic woods. The beauty is in the detail and not in clutter. Each finish item really stands on its own. The kitchen was done in Silestone to be easy to use. And I used textiles like faux leather and Novasuede. You can wipe it all down.” She also had aesthetics in mind when she selected finishes.

“I wanted to use all the different, beautiful, exotic woods because contemporary style is very clean,” she says. “In a contemporary house, the materials take the lead.”

In addition to the living/dining and family rooms, the upper level of the 13,000-square-foot residence encompasses the kitchen, individual offices for Rick and Carol, and bedrooms. A front wing includes bedrooms for the kids and a recreational/TV room where they can do homework, entertain friends or just relax.

Between the bedrooms/offices and living/dining areas lies a large foyer with a winding staircase to the lower level. A major design element in its own right, the stairway features wood treads on a steel base and stainless-steel rail.

At the base of the stairs is the only part of the house that deviates from the modernity elsewhere: a step-down wine cellar designed by Susan with French pavers and Moroccan lamps.

The lower level, which accesses an outdoor patio with a bar and barbecue station and the pool and spa beyond, includes a home theater and gym. But most of the downstairs comprises a large recreation room/poolside retreat featuring a backlit custom wall unit for displaying collectibles; a casual, low-backed, modular sofa in durable Missoni textiles; a wool area rug under bronze and gold chandelier pendants; and a glass-topped dining table with chrome and brass gear cogs that expand the table without the insertion of a table leaf.

“It’s a different look than the rest of the house,” Rick says. “It’s a fun room and a great space for entertaining.”

One of the focal points in this area designed by Esteban Lopez and James Niebling is a wall covered in a beaded-texture wallpaper resembling shagreen and fronted by a collection of masks acquired by Rick and Carol on their travels.

“We didn’t want to impact the visual of the wallcovering or make any holes in it,” Esteban says. So they mounted the masks on a sheet of Plexiglas that they hung from chains anchored in the ceiling. Below is an antique storage bench that Rick and Carol already had but which Esteban and James updated with a faux-fur cushion.

For more photos from this feature, check it out in our digital edition.