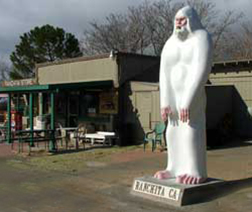 While traveling to Borrego Springs for a garden tour this past weekend, Art Director Laurie Miller noted with interest the egg farms. Managing Editor Eva Ditler was intrigued by the camel farm. But it was the Yeti that grabbed my attention.

Who would have expected to see an abominable snowman in the California desert? And what was the 11-foot, nearly albino yeti doing in front of the Ranchita Country Store?

Yesterday, I called Joe Rauh, who made the fiberglass statue and installed its brown brother in front of his Ranchita Real Estate office. What began as a hobby has turned into a lucrative sideline for Joe (Roadside Monster Co.): He just shipped a blue yeti to Branson, Mo.

It’s all about catching someone’s eye, about promoting business. A yeti is odd, yes, but clever too — unlike many of the press releases that flood my email inbox.

Just this week, I received one that began, “Writers, editors and bloggers alike!” The remaining text was filled with jargon such as “integration,” “industry-leading” “revolutionize,” “game changer,” “enhanced functionality,” “premier cloud-based” “seamless” and “sophisticated visualization tool system.” Yadi, yadi, yadi. At least the hype-laced email was thankfully bereft of exclamation points (aside from the initial one).

Another email I received this week began, “Your coverage is invited!” The last sentence also ended with an exclamation point. The exclamation point gets way too much credit for connoting something worth shouting. People use this punctuation mark so often that it loses its potential effectiveness. Look at your keyboard and if the imprint on that button in the upper left corner is worn off, you have exclamationitis. (Rx: Tone it down.)

Of course, some PR people don’t need an upside-down “i” to make an exclamation. Do you have any idea how many press release emails begin, “We are thrilled to announce …”? Apparently, they assume that I will, in the same vein, be “thrilled” by their announcement. Most often, I am not. I would be thrilled to win the lottery. I am not thrilled that so and so has joined a firm or that a business has revamped its website (a common “announcement” for press releases).

A press release I received yesterday began with the “thrilled-to-announce” format, but preceding the “For Immediate Release” section was the oft-used personal touch: “I hope this email finds you well.” Yes, thanks, my health is quite intact, owing no doubt to my regimen of daily exercise, a plant-based diet and adequate sleep. Oh, but that’s not what you really want to talk about, right?

Maybe I’m being overly harsh. After all, we media folks rely on PR agents to keep us informed beyond what we discover on our own. Then again, perhaps I’m not all that harsh after all. I do, for some inexplicable reason, appreciate the emailed press release that began, “Driven by a transformed sense of hope and openness to a world of possibility, …” — especially since the second paragraph begins, “After a period of slumber, we are now ready to face the day with an upbeat, confident composure.” Whoohoo!

P.S. Within a couple of hours of posting the above, I received an email press release beginning, "Hope this finds you well!" Well, indeed!