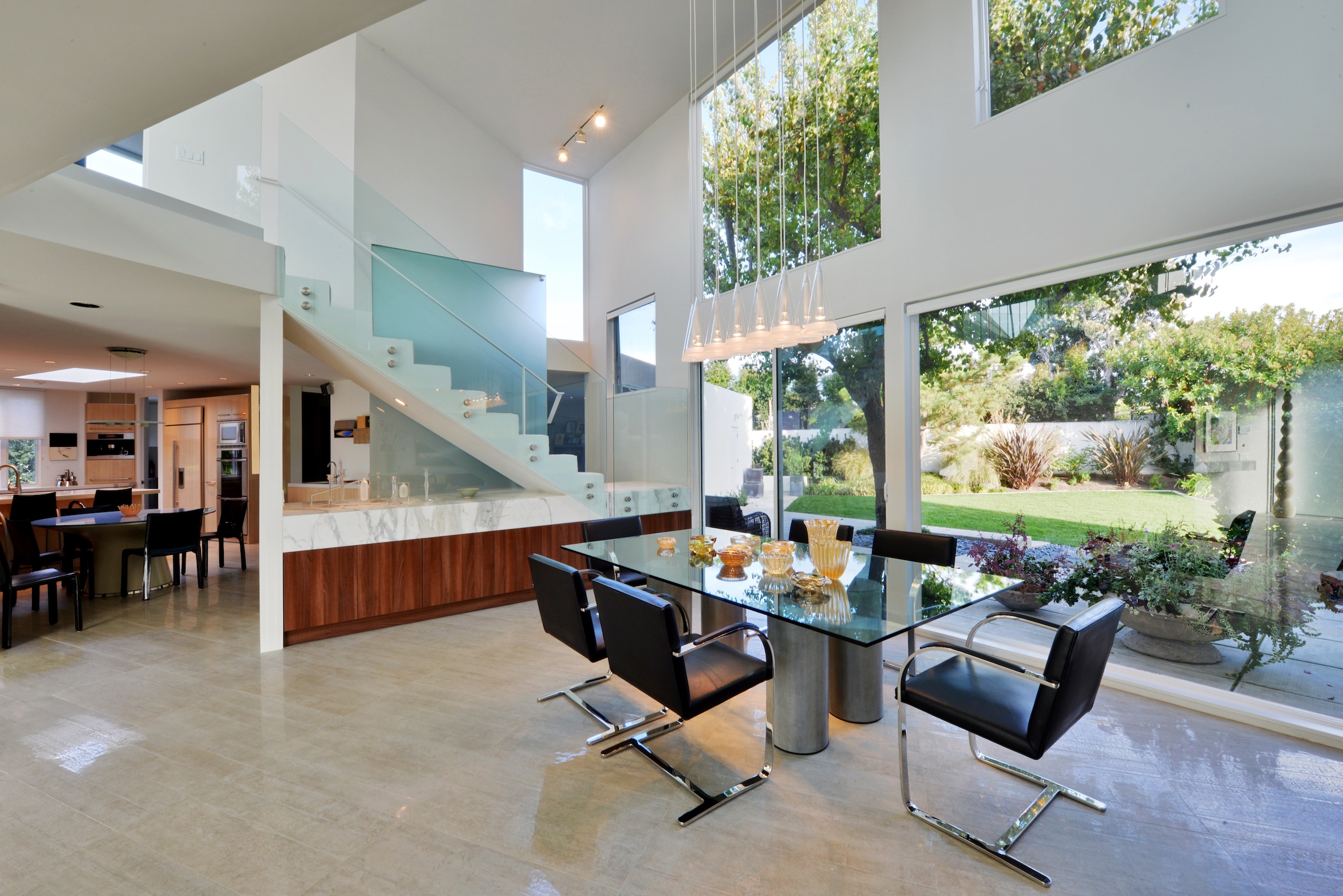 Aging in place sounds like a great concept. You can stay in a home filled with cherished memories

and near longtime neighbors. But when your house no longer meets your needs, you may need to follow the example of GG and David.

The couple, who planted family roots in the hills overlooking La Jolla Shores, have faced lifestyle changes twice over the years, each time deciding to improve their home instead of moving. When they began thinking about the future of their L-shaped ranch house nearly 25 years ago, they brought in Janice Kay Batter and Michael Batter, the husband and wife principals of Batter Kay Associates in Del Mar.

The architects went to work designing a second-story master suite with a fireplace and office, as well as a guest bedroom and bath. Downstairs, they expanded and redesigned the kitchen/breakfast area and reconfigured the existing baths, making them aging-friendly. Removing a closet allowed them to build a central stairway leading to the new master suite. An expanded and reconfigured dining area creates a better flow to the living room and kitchen.

“In the remodel process, our 2,800-square-foot ranch house was stripped to the studs and was reborn as a 4,000-square-foot, light-filled, two-story, stuccoand-glass box in the International style for which the Batters are so well known,” GG says.

By late 2011, GG and David’s youngest child had graduated from college and the two oldest children were married with

babies. “We had plenty of empty bedrooms, but the living and dining areas were cramped at family gatherings,” GG says. “We wanted a home that was easy to maintain and one that would be kind as we age.”

They were so impressed with the earlier makeover by Batter Kay that they contacted the firm again. “With our wish list in

hand, back to Michael and Janice we went,” GG says. According to Michael, more people are staying in place, renovating their homes. “They say, ‘We know how we live here. We like this space.’”

As a result, Janice and Michael find themselves pulling out old plans and revisiting houses they’ve worked on years earlier. The second chapter for GG and David’s home makeover focused on the master suite that Batter Kay had created years ago. The ocean view proved so inspiring that the homeowners wanted guests and visiting family to appreciate it as well from a new sitting area off their bedroom.

“How could we conjure this new space without giving up too much?” GG asked. “The upstairs guest room had long since been requisitioned as a home office, so we felt comfortable giving up some space from a second desk area in our master bedroom. And since we rarely used the outdoor balcony off the master, it was no sacrifice to annex that space.”

Solving one of the critical design problems, the architects partitioned the bedroom suite from the new sitting area by

installing a Dorma floor-toceiling, sliding, etched-glass door system. The doors open flat against the walls and can

be locked when closed. Outside the bedroom is a large retreat floating above the dining room with a view to the living room below. Looking out, a 15-footlong, ocean-facing window captures the day’s many moods.

thick, tempered, etched glass, creating a visual barrier between the kitchen and dining areas. Downstairs, changing technology allowed them to eliminate the smallest of five bedrooms, which had become “a homework room.”

yet allowed Internet and music access from virtually any room,” GG says. By eliminating the bedroom, the architects created a new front entry that flows to the living room to the left and the dining room that looks out on the back yard.

Walnut cabinets and Calacatta countertops were installed in the entry and dining room to unite the spaces. LED lighting substantially trimmed utility bills. GG became an expert on flooring after poring over numerous options available to replace the home’s hard-tomaintain limestone. She even attended a trade convention in Las Vegas to get ideas before

While the second project added only about 100 square feet to the house, the changes, which included upgrades to the

kitchen, established a new focus on the common rooms and on entertaining.

“It was a great thing to be asked to remodel a house that we did years ago,” Michael says, walking through the seamless

boundary marking the firm’s first and second remodels. And with the remodel reflecting a changing lifestyle, GG notes, “We’re ready for the next chapter  of our lives.”