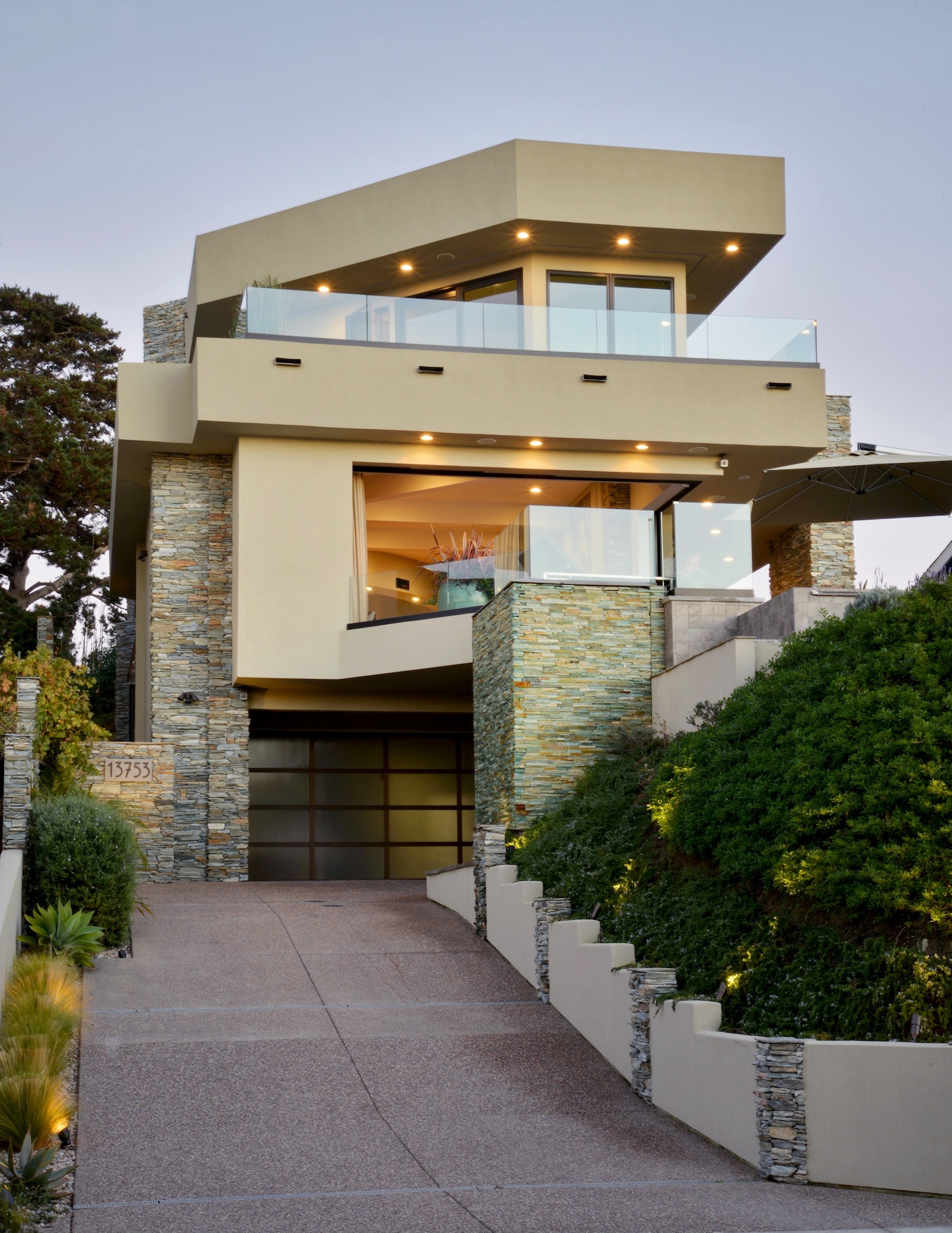 palette of sky and sea, a San Diego home is a testament to function over form.

Because of the slope, there’s little to view from the street — only a sturdy driveway leading to this modern aerie. But nearer the entry of the three-level home, a peaceful waterfall emerges. Trickling over individually cut Apache Cloud flagstones, the water feature visually speaks volumes, especially when lit at night.

Surprises abound in this nearly 7,000-square-foot contem- porary that is custom designed down to the cantilevered legs of an 850-pound dining room table.

“Right from our first meeting, I knew this was going to be a special ride. They both had done a lot of research work prior to our meeting,” says Art, who bases his AJH Construction firm in La Mesa. “Usually I ask the client to start a photo album of pictures that might express their dreams for their new home. But they had already started one — what a great surprise.”

A world-class scientist, Stephen had delineated in specific detail the architecture and natural feel he wanted on one of the last coastal empty lots in San Diego. Suzanne downplayed her creative role, insisting she’d be happy with two things: a laundry chute and a gift-wrapping station. She got more — a lot more.

During two years of designing and acquiring building permits, Art gained an understanding for what Stephen and Suzanne liked and disliked about places where they had lived before and what they wanted from their home on a daily basis.

The couple’s detailed criteria included no boxy spaces, ocean views from every room, smooth traffic flow that would be the envy of any flight controller and meeting LEED specifications for all energy usage.

The trio collaboratively chose structural elements of the house, such as the bluish stacked flagstone throughout and thick planks of imported bubinga, a nonendangered, rosewood-like hardwood common to equatorial Africa. The planks were hand tooled into a show-stopping collection that encompasses the kitchen bar, dining room table and breakfast nook — and two electric guitars. The bubinga, which was special ordered from Africa, measured 6 feet wide by 26 feet long.

“Janine did a fantastic con- sulting job that saved us count- less hours in choosing the right materials, furnishings and colors for the home, as well as having furniture made,” Suzanne says. “Since both she and Art had raised families, they brought endless insight into the subtleties that make a house a home that’s functional to live in.”

Janine was tasked with com- plementing the modern archi- tecture with furnishings. She chose fabrics mostly from com- panies under the Kravet label.

“I worked the lines and curves of the house to repeat in the furniture,” she says. “Also, the large use of rich red-browns in the cabinetry and kitchen countertop warmed up the interior.”

“From these brainstorming sessions, I learned that Suzanne really wanted a laundry chute, which turned out to be the most difficult item to design because it had to be invisible and have access to all three floors,” Art says.

The discussions produced creative surprises, like having the front door made of Torrey pine acquired from a licensed broker who deals in naturally fallen trees, a large video screen that lowers from a hidden niche in the ceiling and radiant heating beneath the sapele flooring.

The planning sessions also produced seven fireplaces (four inside and one on each terrace); four bedrooms with ocean views; seven bathrooms with different stone-tile flooring and granite countertops; two laundry rooms, including one off the master suite; cantilevered stairs; and an entry waterfall designed by Art with green, hand-cut crystalline from New Mexico.

The 4,400-square-foot middle level is a triumph of Art’s free- form contemporary design.

“This area, especially the kitchen area, went through many conceptual designs,” he says. “We had to make it pretty and extremely functional for both entertaining and daily living.”

with a private entrance, mini kitchenette and balcony.

Windows dominate the south and west sides of the great room. When the couple wishes to enjoy sea breezes, they can electronically open 18-foot sliders. “That is our air conditioning!” Stephen says.

Next to the large custom dining room table, sapele cabinet doors open to reveal storage for 10 table leaves. Tall cabinetry throughout also hides electronic components and the entry to the 400-bottle wine room.

A massive backlit wall of onyx creates a dramatic backdrop for viewing the iron wine racks behind a wall of glass. Another large slab of onyx is installed over the fireplace in lieu of the traditional painting.

An accomplished chef, Stephen enjoys his own cooking zone, which allows him easy access to the stove, refrigerators, sink and a large granite-topped island for preparing meals. The area on the other side of the island is for guests.

“They have their own space that does not encroach while I’m getting dinner ready,” he says. “The third zone is a combination of the bar area, where guests can sit and talk to me while others can be working around the center island. This keeps everyone together.”

The kitchen design includes a separate area where Suzanne can show off her pastry-baking talent, so they can work simul- taneously without getting in each other’s way.Making the kitchen a chef’s delight are Thermador appliances and Miele built-in coffee maker, microwave and warming drawer.

“The sheer number of cabinets throughout the home was a big design issue for them,” Art says. “They wanted every inch usable.” As a result, kitchen cabinets soar to 11 feet. To reach upper shelves, Art designed a library ladder that can be pulled

from a hidden space in the kitchen. But it’s the lighting that catches the eye.

“In every home I get to design and build, I try to give the client something special and unique,” Art says. “Because I have been blowing art glass for 15 years, I made all the drop lighting for the kitchen and the chandelier for the main powder room.”

The 2,500-square-foot lower level includes the garage, an exercise room, a laundry room, a walk-in cedar closet and a bonus room with a full bath. The bonus room has a wall bed for guests and a craft and sewing area.Upstairs are three bedrooms, each with its own bathroom. The southwest corner became the master suite.

“As a child I used to lie on the carpet by the windows where the sun came in to nap in the afternoon, and I wanted a more comfortable version of that,” Suzanne says. “As it turned out, Stephen used to do the same thing as a child.”

Taking that cue, Art and Janine fashioned a large chaise in a corner nook, where the couple can read or nap or lazily take in the sky, the sun and the sea.

For more photos from this Home of the Year feature, check it out in our digital edition.