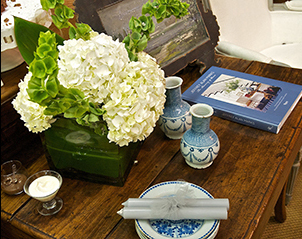 THERE’S NOTHING LIKE CHAMPAGNE, sumptuous hors d’oeuvres, jazz and a gaggle of interior designers and architects— and even a few toddlers and babes in arms — to make a party. Last Thursday, such an evening at C’est la Vie Antiques was a hit. Architect Drex Patterson attended, as did many designers, including Amy Meier, Robin Eisman, Elizabeth Thiele Barkett and Cindy Lambert — the occasion being that one of my favorite designers, Jeffrey Alan Marks, has just published his first design book and agreed to come that night to talk about it. The Meaning of Home (Rizzoli New York) is a subject dear to our hearts.

I am so proud of Jeffrey, rather like a mother hen, having known him for the better part of 20 years.

His “room” was a hallway, elevator and wine closet — small. I wrote, “Using fabric and paint and a touch of Fortuny … and a Rose Tarlow chair, … Marks reveals his knowledge of the classics but is up to date.” He had a style that caught my eye from the beginning.

By 1998 in the Coronado showcase, he’d graduated to the slightly larger den as his space. “Unafraid of color, his wall treatment is inspired … a quintessential, sun-splashed California room,” I noted. More Tarlow, a lamp this time. I always enjoyed how he brought in “with-it” designers from Los Angeles or beyond that other local design firms didn’t seem aware of. He’s still doing that — if he isn’t designing the pieces himself.

In 1999, I wrote that Jeffrey’s “daring projects speak volumes about sophistication and European style.” By 2000, he had the largest room of the showcase: the living room of a Monterey-style house. He was inspired to look back at Frances Elkins (the perfect choice); he wasn’t too proud to reference great designers of the past. By this time, he got credit for designing furniture too.

Before he left La Jolla for Santa Monica, SDH/GL published two stories on his own homes — a cottage in Del Mar and a house across from the golf fairway in La Jolla. Since then, we’ve offered occasional reports of his work, up to the inclusion of him in our Fall Interior Design Report (October 2013 issue).

Now working on a world stage (when not on television or in a national magazine) Jeffrey is finishing up a fishing lodge in the jungles of Belize, showed a second collection for Palecek furniture at last month’s High Point Market and, coming this spring, is debuting a line of fabrics for Kravet.

I’m sure there’s more I don’t know, though on Thursday he hinted at a new television show and a new Mandeville Canyon project. We hope for more interiors in the San Diego area. The magazine and I will be sure to let you in on the latest.