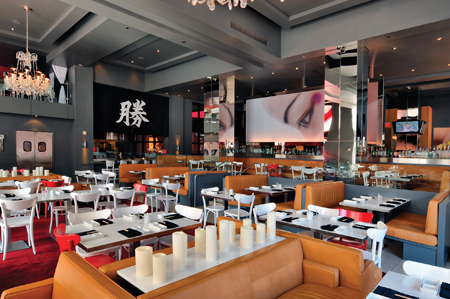 YOU DON’T YODEL, “Irrashamasae.” Nor do you speak it gently and politely. Diffidence doesn’t dally with this rascally rendition of “howdy.” When patrons enter Katsuya, guests and staff shout the greeting loudly, creating a tsunami of sound that hoists new arrivals atop a crest of good will. The word trips obligingly after two sakes

and a Double Hamachi roll at downtown’s pearl in Philippe Starck’s shiny string of high-line restaurants. Genial GM Nick Cozens says that in Japan, a languid “irrashamasae” may cause guests to stalk off. Not at Katsuya, which recently and quite deliberately San Diego-ized its menu with $10 “local” cocktails like the 6th and F, a tasty muddle of vodka and fruit flavors. Such affordable, inventive grub as Wagyu beef sliders and a ceviche of chopped sashimi and citrus ponzu sauce jam the joint. Says Corporate Chef Alex Becker, “As far as customizing the menu for San Diego, we cater to the neighborhood with good food that’s approachable and comfort-able. It doesn’t have the glitz that people in L.A. look for.” He’s right: Glitz motivates few of us here. What’s notable is Katsuya’s grasp of issues that have flattened out-of-town chains confident that “little San Diego will be grateful we’re here” (oh, the list we could write). New and captivating: Korean-inspired rice hot pots topped variously with Japanese mushrooms, braised short ribs and spicy pork bulgogi. The tasty SD Roll of shrimp tempura, avocado and spicy albacore is outdone by the Double Hamachi roll’s double whammy of spicy yellowtail deluxe wrapped with more of the same melt-in-the-mouth fish. Give Katsuya a shout-out on the ground floor of the Andaz hotel.

WHY NAME A PLACE “Eureka!” other than to lure writers to use the exclamation to open praiseful stories? Eureka, indeed! I found myself unexpectedly entranced by this carefully conceived newbie at University Towne Center. The Original Eureka! Burger — demurely decorated with iceberg lettuce, tomato, pickles, Bermuda onion and “secret” sauce — probably would satisfy more than the pleasures of the Fig Marmalade Burger and other patties laden with numerous deluxe toppings. Like Jeff Jackson’s perfect-in-its-simplicity Drugstore Hamburger at The Lodge at Torrey Pines, Eureka!’s original balances textures and tastes with pleasing precision. Yes, some culinary auteurs treat the concept of beef-on-a-bun as a blank canvas on which to create absolutely anything. We confess liking the oft-outrageous Slater’s 50/50 burgery in Liberty Station, but wonder if the new ’Roo Burger isn’t more Dada than fodder. Executive Chef Brad Lyons evidently thinks that gilding equal portions of ground kangaroo and bacon with Brie, thick-cut bacon strips, huckleberry ketchup, crushed-macadamia ricotta, greens and sliced radishes will put a hop in diners’ steps.

THE DOUGH ALSO RISES, and on a sharp trajectory in the case of Social Life Pizza. After launching a first location in San Diego’s College area (a natural for any “social” con-cept), the brand commences a nationwide expansion by opening early next year at The Venetian’s Grand Canal Shoppes in Las Vegas. Yes, this does seem an upgrade. The restaurant’s social aspect calls upon guests to self-design pies at the counter. They can expect quick service, because the 900-degree, dome-shaped pizza oven spits out thin-crusted, hand-stretched pies in 90 seconds or so. There’s a craft-beer bar, of course. But the more interesting details are that the dough is based on 00 flour from the Naples region and ferments for 48 hours to develop flavor and “chew.”

GET YOUR SPICY ON at the remade Mr. Dumpling in Kearny Mesa, a caravansary at which to figuratively put up your feet after prowling the nearby 99 Ranch Market. Celebrated for unnervingly piquant, hot-pot dinners, Mr. D now offers various top-quality dumplings, pot stickers and meals-in-bowls with Chinese and Korean inspirations. If you like slurping skinny vermicelli from pepper-red soup, don’t miss it.

PURPOSEFULLY ECLECTIC, North Park’s restaurant row embraces one-of-a-kinders like Spread, a peanut butter-based establish-ment that smoothly — and sometimes crunchily — prospers in the shadow of heavyweight neighbors like West Coast Tavern and The Mission. A sign advertising “Tonight’s New Feature: Unidentified Flying Pasta” got me in the door for a look, but not a meal, since Chef Abe Botello’s new menu at West Coast beckoned. There’s more to come about this locally grown talent, whose pretty asparagus and poached egg appetizer seems at deliciously delicate odds with the football playing so lustily on oversized screens.