Get Over it, San Diego 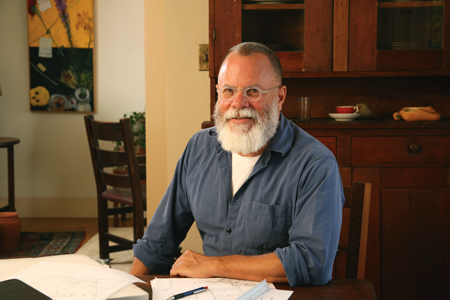 After earning a master of fine arts degree from UCSD, artist-craftsman-designer Roy McMakin launched his Domestic Furniture operation here, later relocating to Los Angeles and then Seattle, garnering rave reviews and celebrity clients along the way (he even designed the set for The Tonight Show). His Domestic Architecture firm, run with business partner Tom Mulica, takes up where his witty furniture creations leave off — finding the sweet spot between rustic and industrial, vintage and modern. Roy was one of the original Murals of La Jolla artists (see “Mural, Mural on the Wall” in the August issue of SDH/GL), created an installation of furniture as art in the new downtown library and is represented by Quint Contemporary Art in La Jolla. Once again making San Diego his home base, Roy is working on a children’s book about furniture and architecture.

Q: San Diego has a history of architects as developers. Is that what you’ll be aiming
for here?

A: It’s got both a history and a present-day version of that, which is kind of interesting to me. Not to be comparing Seattle to San Diego, but Seattle is much more set up to make it very easy for developers to come out and consolidate a block into just a big thing. There are surprisingly few architect-developers up there. It just doesn’t work
out, and I really notice that here it does.

Q: How did you get from furniture to architecture?

A: Somehow [the furniture work] just led to people saying to me, literally, “That’s a nice sofa, would you do our huge remodel for our house?” Thinking back on it 20 or 25 years later, I kind of can’t believe I said yes. I can’t believe these people are offering me these things that they did. I just sort of began doing architecture, and that then led to forming my own architecture company where I employ trained and licensed architects. I act as the principal and have these architects who help realize what I’m doing.

Q: Is it true Irving Gill played a role in your jump to architecture?

A: I was living in a spectacular Irving Gill house in L.A. It was by living in his house for a number of years that I really understood what great architecture is — and not just from the aesthetics of it, but from the func-tionality, the choreography of it. I felt like I was — not in a creepy way, but in the way great art does it — in Irving Gill’s mind, not
so much looking at [the house], but how I moved through it in my daily life. It was deeply influential.

Q: Do you have any formal training as an architect?

A: I have zero formal training as a design person, but I have always had a love of domestic issues in architecture. And when I was considering what I would be when I grew up, so to speak, I thought of archi-tecture. But I really felt like I was more of an artist than an architect, so I pursued an art career. I began doing the Domestic Furniture project here in San Diego, then moved it to L.A., which was really meant as a kind of good distillation of my art thing. But it took off in its own way.

Q: What surprises you about San Diego?

A: I think it has a sort of arrogance about
how nice it is here in terms of the weather and the landscape, but kind of an inferiority complex about the built world and the kind of things that go on here. I think it’s mis-guided. Friends of mine who have been here and been part of things and had a pretty rich life here, you hear in their voice the sense of regret, “Oh, I got stuck here for my whole life.” And then I’m thinking, “Well guess what? Being stuck in a city that’s beautiful like this, you really shouldn’t complain.” This is really a secondary city, because it’s so close to L.A. But I think it’s diverse and interesting, and it’s got this incredible architecture. You drive around Mission Hills and South Park and all the old neighborhoods — it’s incredible the stuff that’s here in terms of 20th century architecture.

Q: What do you have on the boards now?

A: I’ve done lots of major restorations and remodels of homes, a lot of times architecturally significant, historical homes. And now I’ve decided to discipline myself and not do that this time, but to build some-thing from the ground up that would be my home and studio. I found this spot that’s bigger than I needed, so I’m in the initial phases of a home/studio for me and a second home for a couple in Bankers Hill.

Q: Do you have a master plan for San Diego?

A: I’m not here to improve San Diego. I’m here to be happy and enjoy it and try and do decent things while I’m here. I don’t have any illusions that anything I will do will be that major. But I do think people should get over [the inferiority complex] and realize it’s pretty great here and perhaps do a little bit to make it better.