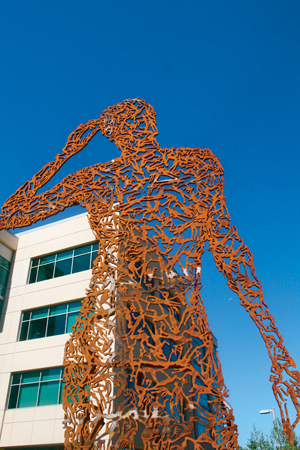 You can register to vote online or by mail. But residents of San Diego County should go to the new Registrar of Voters office and see the two big heads.

These heads are not bureaucrats, but rather the culmination of a three-year project to integrate public art into the County Operations Center campus. The heads, each measuring 6.5 feet tall and 4.5 feet in diameter, are works by famed ceramist Jun Kaneko. Installed at the end of October, they are “under wraps” for unveiling at the registrar building dedication on Dec. 3.

“We wanted something that had a presence and would hold people’s interest,” says Gail Goldman, who consults on public art for cities across the United States and in Canada. For the past few years, she has been working with a three-member selection committee in conjunction with a .5 percent allocation for artwork from construction costs of San Diego County buildings beginning in 2009 and just ending. The museum-quality collection, representing an investment of almost $2 million, deserves a visit even if you have no business to conduct with the county.

“The medical examiner staff wanted artwork that would contribute to a calm and comforting environment,” Gail says. They include paintings by Italo Scanga, Marie Najera, Ellen Salk, Gail Roberts and Manny Farber. Paintings and photographs in the Campus Center were done by William Glen Crooks and Philipp Scholz Rittermann, respectively.

“Approximately 75 artists were considered,” Gail says.
For the site-specific, suspended sculptures, she presented about 20 artists. The committee then asked eight of those artists for conceptual proposals.

For the commissioned artworks, Gail says, she considered “artistic excellence, innovation and originality; capacity for working in media and with con-cepts appropriate to the project goals and site; and experience successfully completing work of similar scope, scale, budget and complexity.”

The other major aspect of the program involved artifact displays. Local sculptor Jay Johnson says he was contacted by Gail initially for a suspended artwork, but then was offered a commission to create infor-mative displays of historical documents, photographs and objects used in county operations and even parts of the buildings torn down.

Jay laughs when he recalls that his first question after accepting the commission was, “Where are your artifacts?” (logically assuming they had been gathered in one location). But the reply he received was, “That’s what you are going to find out.”

Jay and researcher David Richardson began amassing artifacts from county staffers, including old keys, signs and obsolete machines such as a mechanical calculator. The
displays, which Jay calls “assem-blages of interesting objects,” are artworks themselves. For one display, he had LED light boxes built to showcase six stained-glass windows from the 19th century installed in the San Diego County Superior Court building in 1889.

“There was one for every state, when there were 42 states,” Jay says.

For another display, he had the signature of Abraham Lincoln enlarged and printed on alum-inum. The signature came from an 1865 deed returning San Luis Rey Mission lands to the Catholic Church after the Civil War.

In late July, Gail led a tour of the campus for San Diego Museum of Art’s Contemporary Arts Committee. Several of the artists were present to discuss their works. Joyce Cutler-Shaw explained that her sculpture titled Orbital Loops was inspired by a newspaper article about the Cassini spacecraft on its trajectory to Saturn.

“This was a chance to draw in space,” said Joyce, who described how the 24 interlocking loops of 2-inch aluminum tubes — powder-coated in a lustrous blue-green — had to be disassembled and brought individually into the county building, where they were then reassembled.

Standing below her seven sculptures that bring jellyfish to mind, Anne Mudge said, “I thought of these as being bio-morphic chandeliers.” Made of hand-woven, polished stainless-steel wire, the grouping is titled Littoral Drift. “They’re about contrast,” Anne said. “They’re about expansion and contraction, light and dark, earth and air. …I knew I wanted to do some-thing that was fairly ephemeral, but I had to contend with this space. Part of the design was in response to that, which is the reason for the very strong verticals.”

Christopher Puzio created two pieces for the smaller lob-bies in the medical examiner/forensics building. Cell Cluster is composed of aluminum circles and ovals cut with a water jet and then welded into one large oval. In contrast to the smooth/rounded sculpture, Star Cluster takes an amorphous shape with individually cut pieces of aluminum welded in what appears as random “disorder.”

“The idea was to tie in dif-ferences in scale,” Christopher said during the tour.

In the commons building, William Glen Crooks spoke about his three paintings; and photographer Philipp Scholz Rittermann explained how he achieved the temporal effects of his photographs. He shot the 12-panel Alfa Lightning, Interstate 10, Arizona, USA (which captures lightning strikes in daylight) on a road trip from Texas to San Diego. It leads to thoughts about movement and perspective.

“The eyes see everything,” he said. “The mind zooms in.”

“This really was a fabulous opportunity,” Gail says of the construction project, “because it presented the ability to take a look at a project in a very cohesive way and put together a collection where the pieces complement each other and create a holistic experience.”