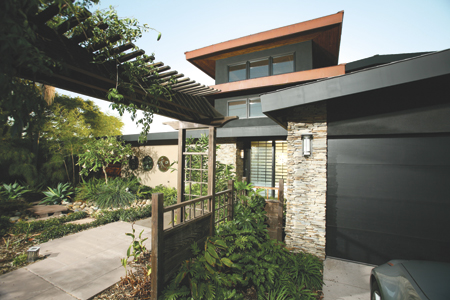 “People think traveling all the time is glamorous, but it’s hard work,” she says. “I wanted to feel comfortable at home.”

Her 1952 tract model home fell short of that goal, so she called upon architect Mark Silva for a transformation that would reflect her admiration for a serene Asian style. In adding a second level, Mark incorporated into the front exterior two pagoda-style tiers in copper with cedar eaves. When it came to the front door, he took the glass panels out of a standard slider, created a grid with 1-inch tape and then had them sandblasted to create a faux shoji screen.

Just inside, a real shoji screen separates the entryway from a yoga studio, which features a palm-wood floor. When the screen is open, Katie can meditate on a view of plants whose roots will never outgrow a container because they’re planted in the earth on which her house sits.

“I wanted the garden to come from the outside in,” Mark says. To achieve that, he carried stacked ledger stone — laid individually by hand — into the foyer and broke through the foundation for planters open to the earth. Smooth, poured concrete allows the floor to curve gracefully around the planters and “flow” into the kitchen. Katie hand colored the concrete with three shades to give it swirling, coppery depth; and a sealer gives it a glossy finish that reflects light.

“All the elements we tried to keep as natural as possible,” Mark says. “It’s a mix of Asian and organic.”

Beyond the high-traffic entryway and kitchen, the flooring is ironwood, while the floating stair treads and cabinetry are Lyptus (a hybrid of two eucalyptus tree species). Tongue-in-groove cedar in an inverse-hip ceiling over the atrium entryway lends more Asian feel to the house, especially with its 45-degree miters.

“You can go modern, but it can become sterile, cold. I wanted to keep the warmth,” Katie says. “Mark talked about mixing woods. It warms up a very clean environment.”

“As long as they don’t look like each other, if there’s enough contrast, they can be beautiful,” Mark adds.

A standout among the wood elements is an organically shaped bar top made from Hawaiian koa. Katie spied the raw wood leaning against a wall in a store (since closed) in the Cedros Design District of Solana Beach.

“I called Mark and said, ‘I think I found the bar.’” Mark approved of her discovery and had a woodworker friend finish it to a fine polish.

For the kitchen countertops, he chose a black marble distinct for its plethora of white-lined fossils (the marble also appears in the master bath). A shorter counter near the entryway is topped with an acid-washed, leather-finish granite.

Other elements of black are the I-beam supporting the staircase and the frames around the doors, which are anodized dark brown but appear to be black in contrast to the light walls.

While Mark added most of the additional 1,200 square feet (for a total of 2,700 square feet) in the loft-style master suite and offices, he also extended the living room — not just by adding a rectangle of space, but, rather, by making the back of the house curve with the same radius as the yard.

To block some sun exposure but still satisfy Katie’s desire to drench the house in light, Mark fashioned a curved, slat-style “canopy” from standard segments of aluminum — extending 6 feet from the house at both the ground floor and upper levels.

At the top of the stairs is an office. To the left is a bridge that offers a view down to the entryway and out windows located to catch the horizon along their centerline. The bridge leads to an open office space and loft master bedroom, which features a custom Lyptus bed, nightstands and cabinetry.

“The house is just really comfortable. It’s not confining,” Katie says. “When people come over, everyone feels relaxed.”