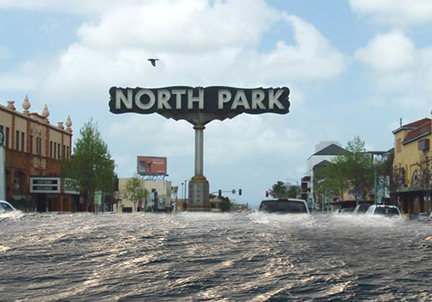 In its current issue, National Geographic discusses how the planet would look 5,000 years from now if all the ice on Earth melted. Life would still exist; but average planet temperatures for an iceless globe would be around 80 degrees, compared with 58 degrees today.

The melting of 5 million cubic miles of ice would cause oceans to rise by 216 feet, rearranging coastlines on every continent.

What does that bode for North Park? Would our beloved Saguaro’s taco stand be serving fish tacos to fish? Would the North Park water tank be at the bottom of the sea? Will our craft-beer breweries and restaurants still be cool? Can you be a hipster surrounded by seaweed?

Fortunately, most of North Park is safe from a 216-foot vertical tsunami, but not by much. North Park, Mission Hills, University Heights, Golden Hill (parts of South Park) Burlingame, City Heights, Kensington, Normal Heights and the College area east to the Mississippi River will be safe from the worldwide ice melt.

Most of the mid-city sits on a large plateau (300 to 400 feet above sea level) that begins around the west side of Mission Hills and goes east for miles. At its highest point, North Park sits 370 feet (about 28th Street and Dwight). That’s roughly the size of a 37-floor building (America Plaza, downtown next to the train depot).

But, parts of North Park would become oceanfront property. Low-lying canyons west of 28th and Juniper could be ocean in 5,000 years. Mission Valley would be a long, deep fjord, making Santee suddenly become bikini beach. The new ocean level would be about halfway up the Texas Street hill, with saltwater lapping under the Adams Avenue bridge.

Chula Vista and National City, as well as Coronado and all of downtown San Diego, would be far underwater. The new coastline would come down from Mount Soledad to the east ridges of Rose Canyon to the north edge of Mission Valley. I-805 would be underwater from the Phyllis Place exit ramp to the merge ramp of I-8 and I-805.

On the other side of North Park, 28th Street south to Market would be coastline. The new coastline would be just south of the municipal golf course clubhouse. Half of Navy Hospital would be underwater. And Pershing Drive would go under at the bend to start down the hill to Florida Canyon, which would reappear about Cypress Street.

The old municipal gym near Ford Bowl most likely would be on an island, with Marston Point being beachfront property. And Golden Hill Recreation Center would be an island or would be jutting out on a point of land near what used to be the 18th hole at the municipal golf course.

And, remember, this is saltwater; so that condo you’re thinking about buying near Qualcomm Stadium will be home to your finny friends. If we keep Qualcomm Stadium where it is or build the Chargers a new stadium downtown, it won’t matter except to a scuba class.

If you want to learn exactly how high your house is, there’s a cool interactive map available at sdplantatlas.org/TopoMapPdf.htm.