A Marriage of Style 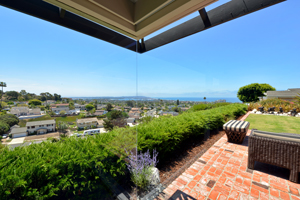 LIKE TAILORING a couture suit, combining two life-styles and furnishings into one custom interior requires drawings, fittings and refiguring until ultimately everything locks into perfect synergy. Color, materials and textures are important elements in both cases.

When interior designer MaryClare Brandt married architect William Krommenhoek in 2008, she had the challenge of melding their two very diverse households into one and making her more eclectic, traditional taste blend with his Mid-century Modern aesthetic.

MaryClare needed a modern, classic look — without the teak. Employing her design flair for knowing thyself, it turned out to be a breeze.

“I have done a lot of houses for myself, so being my own client wasn’t hard,” she says. “What was difficult was making my home fit another person’s taste. As different as our two houses were — mine a two-story with antiques, his one story filled with teak, when we started looking at products, we generally liked the same things, which surprised me.”

Bill, the retired founder of KMA Architecture & Engineering, had remodeled his 1960s home in 1987.

“We decided to sell my house and keep his because of the wonderful bay view and because it is a Mid-century one story, sort of a square donut with a courtyard in the center,” MaryClare says.

In terms of designing for life (see page 68), the single story was perfect, as are the new limestone floors and showers. The reconfigured bathrooms and closets all played into the aging-in-place concept that is part of today’s good design. Showers were designed for ease of getting in and out, and closets were expanded with larger walk-in space.

The couple sold most of her antiques and most of his teak furnishings and gutted the house. Then they visually simplified the interior with one gray limestone throughout for flooring and showers, one kind of granite for the kitchen and two fireplaces, and one countertop choice for the three bathrooms.

MaryClare’s palette through-out is another unifying element: taupe, brown, black and gray for paint, wallcoverings, tile, stone, granite and fabrics. This leaves plenty of room for color accents in pillows and art. Bill’s collection of Mexican and South American folk art buses is showcased in the family room. MaryClare’s extensive Redwing Pottery from the 1940s and ’50s is displayed in the master bedroom.

The dark cherry cabinets in the kitchen and other rooms were inspired by those at a hotel in Waikiki. The kitchen granite is the same as the two fireplace surrounds, though the fireplaces have a “leather” finish.

Bill and MaryClare merged some furniture, which she re-covered in more current fabrics. Sentimental feelings were involved, as they had lived with their individual possessions for years. But her antique rugs went away, as did his carpeting. They selected more modern area rugs, new Crate & Barrel dining furniture, Foscarini’s Big Bang chandelier and Brownstone bedroom furniture.

The gold- and silver-leaf vintage sculpture over the fireplace and a vintage Paul Frankl cabinet they found at Klassik in Little Italy were key to creating the right look. They were sensitive to each other’s likes while shopping together.

“We ended up with a house that looks like me, without the antiques, and like Bill, without the teak,” MaryClare says. Their interior décor is constantly enriched with items they find in their frequent travels out of the country.

A new drought-tolerant landscape, furniture restored with new fabrics, windows treated against heat, ceiling fans and energy-efficient appliances attest to the eco-consciousness of the design.

“Interior design can be more fun now, with the wealth of showrooms and well-designed furnishings for every income level,” MaryClare says. “TV shows, magazines and coffee-table books have brought design and decora-tive objects to the masses. No one style is the most popular.”

Honesty, fun and an anything-goes attitude is tops for MaryClare in decorating today.