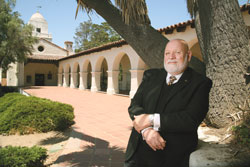 From custom furniture and landscape design to creating and remodeling contemporary homes, architect Marc Tarasuck, AIA, has a had a wide-ranging career since establishing his practice in 1979. A specialist in the rehabilitation and preservation of historic homes and buildings, he also has been involved with the establishment of Heritage Park in Old Town and the Gaslamp Quarter. He sits on the board of the San Diego History Center and the advisory committee for restoration of the Junipero Serra Museum in Presidio Park.

Q: How did you originally get involved with preservation architecture?

A: The initial interest came about when I purchased a row house in National City in 1973. The railroad was supposed to end in that location, but it ended in Los Angeles.
Ten row houses designed for Santa Fe Railroad executives were going to be torn down for a parking lot. So the city had these wonderful historic homes, and I bought one just as an investment. That was during a period when I had more time than money, so I did a lot of work myself and really began to understand the importance of historic preservation.

Q: Was there much work like that going on in San Diego at the time?

A: That was right before everything kicked off with the Gaslamp Quarter, which came about in the later ’70s. And my interest in preservation went right to the Gaslamp Quarter. I was on the first project-area committee for the Gaslamp Quarter and
so really helped develop that particular area.
We thought it was going to take just five years at that time to be where it is today.
Boy, were we fooling ourselves.

Q: What’s the goal when you’re working with a historic home?

A: Fitting in with the neighborhood obviously is extremely important. Honoring the original architect is also very important for me. That’s often very difficult, because some of the homes are located on large properties where you could pretty much easily double the size of the house. It takes a lot of work, thinking and decisions on how to make it all fit in.

Q: What do you tell people thinking about applying for historic designations for their homes?

A: I tell them that it’s a great honor to have historic designation. It’s also a great respon-sibility. I tell them that they’re going to need to comply with some regulations they may not like, but that, in the long run, the opportunity of perhaps getting the Mills Act [applied] on that particular home, which reduces their taxes, is a great incentive.

Q: Is San Diego’s Mid-Century Modern architecture getting an appropriate amount of attention?

A: Mid-Century Modern is to me extremely important. We really need to learn to recognize how important those structures are to San Diego. I’m looking at areas that are turning 45 years old, which is kind of the point where [these buildings] need to be reviewed by the city or flagged by the city [as historic]. We’re talking about Del Cerro and Clairemont and Del Mar Heights; these are all areas that have some very significant structures within them and need to be recognized. We have some of the finest Mid-Century Modern churches located in Clairemont, and people just don’t know
about that.

Q: What are some of the most endangered structures in San Diego?

A: There’s a lot of controversy around Balboa Park and what we do with the park and how we get in and out of the park. I think that it is the jewel of San Diego. And when I walk through the park and I look at the deterioration, I’m just amazed that it’s been allowed to go on as long as it has. It really
is depressing to see the condition of some
of the structures and the infrastructure. …
All the parking is gone from the center of
the plaza now, and we’ll see what it’s going
to feel like without having cars there. I think we need to give everything a try.

Q: You call yourself a pragmatic preserva-tionist. What does that mean?

A: I don’t believe everything needs to be saved. I do believe that, obviously, the best
of the best does and that historic districts are extremely important. I’m also a firm believer that you just can’t put neighborhoods under a glass bell jar and pretend that life doesn’t go on. So I’m willing to see changes take place. {jcomments on}