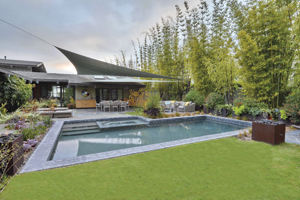 A melodic landscape takes its cue from music

IT IS NOT SURPRISING that Melissa Jordan Gray compares her La Jolla garden’s design to a musical arrangement.

As a musician and composer, she equates plants and hardscape to an ensemble of instruments.

“Design has a lot of similarities to music. You are working with a framework, a tempo, a palette; and there are themes moving throughout,” she says. “When I think about people visiting our house and coming through that first walkway, I very much think about it as a four-bar introduction. The house is intentionally nondescript on the outside. The orchestra is very quiet; perhaps it’s warming up as you come up the driveway. As you proceed down the walkway, you get a small taste of what’s to come, a four-bar intro of sorts. And when you open the door — boom! — that first measure hits. That’s when you see what is revealed on the other side through a huge window to a courtyard, a garden and a pond.”

When it came time to redo the back yard, finding a landscape designer who understood this conceptual aesthetic was important to Melissa. Christiane Holmquist fit the bill.

“Melissa is artistic and detail oriented, and she pushed me to new heights,” Christiane says. “She has an artist’s love of beautiful details, and she was very much  involved in the selection of materials and furnishings, while I chose the plants.”

One of the first plants selected, bamboo, was needed for screening. The catalyst for redeveloping the back yard was the remodel of the 2,500-square-foot ’60s ranch house next door. When it became a 10,000-squarefoot residence with an attached 30-foot-wall, Melissa and her husband, Tudor, realized it was time to redesign the landscape away from the glaring wall.

“Melissa and Tudor were very concerned,” Christiane says. “At that time, they were both still working at home on the second floor, and they were confronted by that looming wall daily.”

On trips to North County to explore hidden gardens in a community of bamboo growers, Melissa and Christiane were awestruck by the very black Bambusa lako and the almost turquoise sheen of Bambusa chungii, which was similar in color to the patinaed copper on the house eaves.

“For harmony, we repeated materials in the back yard that existed in the front and in the house, like the architecture’s patinaed copper accents,” Christiane says. “They inspired the naturally rusted-steel containers, plant troughs, fountains, edging and fence caps.”

The front yard’s medley of concrete mixed with exposed aggregate and flagstone also is echoed in the back yard.

“Concrete walkways in front and back are Mondrian patterned,” Melissa says. “Instead of a grid or a brick type of pattern, the Mondrian pattern features random squares and rectangles that go at 90 degrees here and there.”

The back yard’s design was imagined as rooms. The home’s shape and the pool influenced the design’s rectangular layout. The main entertainment areas consist of a living room, a kitchen with bamboo cabinets and a dining room with two triangular shade sails placed at different angles for interest. To distinguish the living room from the rest of the areas, Christiane raised it by 6 inches and placed it within a rusted-steel frame filled with pebbles. There also are two seating areas, one on either end of the pool, and a hammock/lounging area.

“We inherited the early ’80s pool and spa, but there wasn’t the budget to dig a new pool,” Melissa says. “Instead, we took what existed and reimagined it. On the steps, we used pebbles with little pieces of abaloneshell flecks that glint and sparkle. There’s also 1-by-3-inch glass tile in a vertical runningbond pattern to match the larger glass tile in the indoor shower. The pool coping is tinted concrete laid out in interlocking rectangles like the walkway.”

Most of the original, overgrown tropicals were removed and replaced by lowmaintenance, drought-tolerant plants, including many succulents and bromeliads.

“Melissa loves purple, chartreuse and dark colors, so I used variegated carex as an evergreen hedge,” Christiane says. “In order to provide an elegant, long-lived and vibrant plant scheme, I used mostly plants with interesting and colorful foliage like [Cercis canadensis] ‘Forest Pansy,’ echeveria and aeonium, purple Dracaena australis and the terrestrial bromeliad Aechmea blanchetiana. These plants have a strong presence in the garden throughout the year. Perennials and flowering shrubs add seasonal color.”

A small expanse of lawn gives the illusion of depth. But because Melissa is highly allergic to many species of grass, they chose ‘UC Verde’ buffalo grass, a low-water variety that needs mowing only once or twice a year.

“When you listen to a good piece of music, you should listen to it several times; and you should make a new discovery every time you hear it,” Melissa says. “That’s the way this garden works. The first time you visit, you experience one thing. The next time, you experience something else. There is this great opportunity, creatively, for discovery. There is something fabulous about getting to experience this every day.”