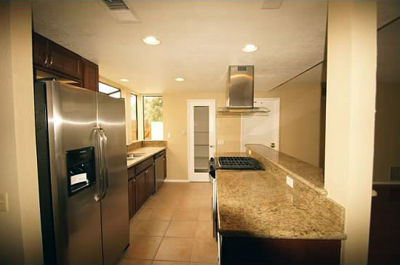 A  HOMEOWNER GRABS AN OPPORTUNITY TO IMPROVE UPON WHAT HE HAD

WHEN A FIRE RAVAGED an Encinitas residence, the homeowner asked architect Bill Currier to cosmetically change the late-’60s, beach-cottage bungalow to a Craftsman style.

“I had the existing house plan,” says John, the homeowner. “And although I could have gone bigger and made a second story, I decided to keep it within the realm of what the community would still like. Rather than build a monstrosity, I kept it a ranch home; but I improved on what I had.”

The exterior, which had been wood shingle and stucco, now is composite siding with an updated but similar version of its original green color.

“I wanted the house and the landscaping to blend with the environment,” John says. “The colors play off the landscape. It was important to me that the home was a fit in the community and landscape. Kent Horner of C&H Gardens helped with that.”

Drought-tolerant plants and shrubs replaced thirsty grass. A few semitropical blooms were planted as well. “We used kangaroo paws for vertical color and movement, Agave attenuata for simplicity and symmetry, prostrate rosemary for groundcover and ‘Barbara Karst’ bougainvillea for color and interest,” Kent says. “We included flax, or Phormium tenax, to provide height without overwhelming the structure. We also used black aeoneum and crassula for drought-tolerant plants of color and Dracena marginata for a sculptural look. Thevetia peruviana was planted for a splash of yellow and green.”

Because John wanted the residence to be sited as though it were in a rustic, natural landscape, sandstone boulders from the Elfin Forest and San Marcos area were strategically placed, and plants were installed around the rocks.

“I wanted the hardscape to coordinate and play off the house itself,” John says. “The colors in the rock and column would play off the small pebble that we had that looks like a crushed version from the columns themselves. “Within a year, I recreated the house and moved in. I was involved with everything, every step along the way.”

Before & After: By Eva Ditler Photography by Martin Mann 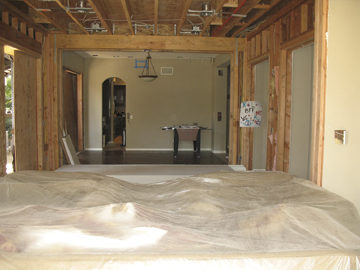