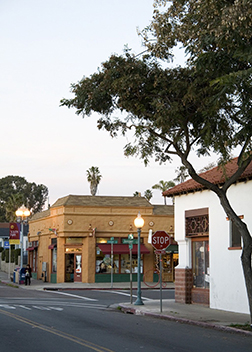 When my girlfriend and her husband moved from the Chesapeake Bay area to San Diego in the early ’80s, they were optimistic that, even though they had a short-leashed budget, they would be able to find a four-bedroom, three-bath, single-family residence with a nice back yard for their golden retriever.

I had my doubts, but was pleasantly surprised when, a few months later, I ran into her at a wooden-car show and she told me they’d bought a nice-sized house that met all their requirements. “It’s kind of in the hood,” she admitted. “But we don’t mind.”

The “hood” was South Park, although she often referred to the area where her house sat as the edge of Golden Hill. Her home was a large, eclectic Spanish-style, but most of the houses around her block were smaller, rundown Craftsman homes with peeling paint and weedy yards. Some had bars on the windows. Many were rentals.

Just down the way, a straggle of shopkeepers were trying to make a go of it, many keeping their doors locked and only opening them if a customer happened to knock.

Last weekend, my girlfriend and I had a lunch date and opted for Eclipse Chocolate Bar & Bistro. It had two pluses: SDH/GL restaurant reviewer Stephen Silverman had given it a Silver Fork Award, and it was within walking distance from her house.

Thirty years have gone by since she and her husband bought their house; and although my friend and I gained a few facial lines, it seems South Park lost its wrinkles in the process of growing up. As we strolled down wide, tree-lined 30th Street, pale yellow blossoms drifted down on us like bits of confetti. We walked by a gourmet food truck and a brightly colored drive-through coffee kiosk, where we stopped to chat with a senior citizen who was busy planting a circle of fuchsia, pink and red impatiens around the base of a palm tree. He said he felt lucky that he could do his part in keeping the streetfront beautiful and that, no, he wasn’t worried someone would steal the little table that looked just like a tree trunk. He’d placed it there for the coffee vendor some time ago and no one had taken it yet.

The Craftsman houses we wandered past probably have bigger mortgages now, but are beautifully restored and have real landscaping. Just beyond a smattering of cute bungalow courts, we peeked into a couple of vintage-style boutique-shop windows. One shop was selling flapper beachwear.

We reached our destination, hungry from the walk. As we sat down to enjoy our three-plate Sweet & Savory Brunch, I commented on the changes in South Park. My girlfriend laughed and said, “Yeah, I guess I can’t call it ‘the hood’ anymore.”