The Rain of Capt. Murphy 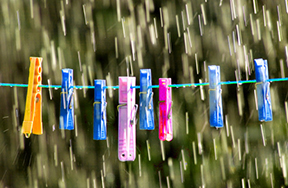 It rained Wednesday. How odd, real drops falling on San Diego in the middle of July. An annual tropical weather disturbance in the Pacific off the coast of Mexico was the cause — or, in my fit of finger pointing, “the blame.”

“Ruined” is a good word to describe how a perfectly normal, sunny day in Southern California was a goulash of gray skies and high humidity.

Locals have adapted to rain pretty much, unless it’s the first storm of the season when oil meets water and motorists meet each other via fender-bending episodes on the interstate.

If the potential for serious injury wasn’t so great, watching inattentive drivers suddenly deal with the first rain of the season could become a spectator sport. Bleachers installed atop the old Convair headquarters on Pacific Coast Highway would fill up quickly to watch vehicles careen from lane to lane.

The creator of the Allstate Insurance “I am mayhem” commercials no doubt has witnessed Californians driving in “first rains.” But did our recent July nuisance rain qualify as the first storm of the season? San Diego’s professional weather watchers log rain totals from July 1 to June 30, so, technically, the monsoon from Mexico qualifies. Fortunately, a quick check with CalTrans and California Highway Patrol indicates the storm did not yield any significant statistical deviation in the normal pattern of vehicular disturbances for July.

Yet the rainstorm did produce quite a bit of personal angst — enough so that I cursed U.S. Air Force captain Ed Murphy, the development engineer credited as being the namesake for Murphy’s law. I have no quarrel with the good captain, but I rue Murphy’s Law and the epigram associated with it, which is that “anything that can go wrong will go wrong.”

Before I describe my experience with Murphy’s law and the sudden storm in San Diego, let’s recap how Capt. Murphy’s name was attached to the adage.

Wikipedia, which is now the modern and nicer version of the insensitive descriptor for “old wives’ tales,” points out that frustration with the failure of a technician to properly wire an experiment at what is now Edwards Air Force Base caused engineer Murphy to blurt out, “If that guy has any way of making a mistake, he will.”

Someone in that military research group eventually published a paper citing the adage and attached Capt. Murphy as the source. The phrase went viral (given midcentury standards), and various incarnations have evolved to what we have today.

My experience with Murphy’s law on Wednesday after I received a call from the car dealership informing me that my first and last free detailing job on my noir sedan was complete: “Black really shines up. You’ll like it.”

Wishing to look Daniel Craig-like as I picked up my muscle car, I needed a muscle shirt. It had to be the black pullover. Of course, it was still in the laundry hamper. Quickly, I tossed it into the washing machine with a load of other clothes.

Half an hour later, I returned and noticed the water level was still half full. A yellow light was blinking, announcing a failure with the drain system.

No matter. I had other shirts.

Calling the appliance repairman quickly instead of procrastinating until Thanksgiving had me feeling better about myself. However, the repairman’s arrival delayed my trip to retrieve my freshly detailed set of wheels. He opened the washing machine and dumped my good stuff into a pile on the adjacent patio. “We have to order the part, and it will take a week,” he advised me.

Of course this wouldn’t do. I wanted that shirt. I found a ball of industrial-strength twine and worked for the next hour creating a series of criss-crossing laundry lines attached to trees and over the pool. Tying the knots for the clothesline made me recall my father’s words: “Nah, you don’t need to join the Boy Scouts, I’ll teach you all the knots you’ll ever need.” True to his word, I learned how to tie knots, including a bow tie and now a clothesline.

Carefully, I strung the wet laundry on the line and went to pick up my dream car. Not having my coolest shirt, I was forced to wear a T-shirt given to me on Father’s Day that reads, “Please do not feed.”

Driving home, I ignored the looming dark clouds, because I was now preoccupied driving through Monte Carlo with James Bond racing after me.

It was noon when I returned home to ask my bride of 28 years if she’d like vodka martini — “shaken, not stirred.” Ignoring my offer, she glanced out the window and said, “It’s starting to rain.”

I dashed to the front porch to see the new car dripping with monsoon rain. There went the detail job.

When I returned to the kitchen, she said, “The rain is causing the clothes on your lines to sag into the pool. What were you thinking?”