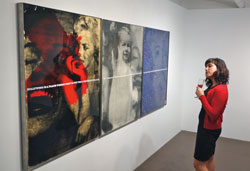 MAKERPLACE OFFERS JUST ABOUT ALL THE INGREDIENTS AN ARTIST NEEDS

ON AN APRIL EVENING, a crowd gathered at McNabb Martin Contemporary Art Gallery in Little Italy, sipping wine and martinis. Servers circulated with hors d’oeuvres, and a DJ pro-vided a musical backdrop. The red carpet and klieg lights in front of the gallery heralded Morgan Ervin’s opening solo exhibition.

In the crunch of days prior to the show, Morgan found expert help at MakerPlace, a business on Moreno Boulevard where artists, designers, professional craftspeople, engineers and hobbyists share a dream shop: 14,000 square feet of space with all kinds of equipment for working with wood, metal, plastic, fabric, electronics and paint.

Since its debut in March 2012, MakerPlace has signed up 350 members. Pat Downing was one of the first.

“I joined because they had a sheer for cutting metal,” the sculptor says. “I was out to buy one, and the guy didn’t have one. He said, ‘Go down the street [to MakerPlace]. They’re opening soon and they have one.’”

Pat works primarily in steel and copper, but also makes wooden bases and clear-coats the metal.

Morgan joined MakerPlace about a month after it opened. His works involve laser-cut acrylic lettering, wood back-grounds and aluminum frames — all of which require tools and equipment.

“But what really keeps me there is the community of artisans and craftspeople. There are so many people that are at the top of their game,” he says. “It’s been great having such an incredible resource of people to draw from when I need really specific things built.”

Because he needs his own large space for detail work and a closed environment for pouring resin, Morgan also rents a 4,000-square-foot studio nearby. “I rented there because MakerPlace is down the street,” he says.

Brothers Michael and Brian Salmon bought their first laser cutter about seven years ago to make custom skateboards and then determined the profit margins in the skate industry were too low to sustain their business.

“Fortunately for us in the early days, everybody assumes a laser cutter can do everything under the sun,” Michael says. “Being creative and resourceful people, we never said no to a job.”

Expanding their abilities and networking, the brothers became a go-to design and fabrication source. After opening a shop in North Park, one of their clients, Steve Herrick, asked if they ever considered opening a shop where others could use equipment. They found the two-story Morena Boulevard space on Craigslist, got the keys in December 2011 and held a grand opening the following March.

“We had to start with a broad web of equipment for everybody, and then we started honing in,” Michael says. “Most of our stuff came from auctions.”

Last year, MakerPlace held a DIY Fest at Westfield UTC Mall, during which about 15 members showcased and sold their work. From that exposure, Pat Downing picked up two commissions for the mall. The first, a fold-formed copper sculpture, was installed in front of the entrances to Tiffany & Co. and J. Crew. The second, a 4-foot, hammered-copper birdbath, was installed in May in The Gardens in front of Pottery Barn.

As Michael recognizes, MakerPlace succeeds by bringing many elements together.

“We are the facility. We are the service. We are the community,” he says. “But it’s our members that make us.”

Photo caption (above): An exhibition at McNabb Martin Contemporary Art Gallery showcased works by Morgan Ervin, who creates his pieces at MakerPlace, as well as in his own studio. In preparing for the show, he enlisted the services of other MakerPlace members. For example, one member with metalworking expertise made the aluminum frames.

A Fine Line: By Janice Kleinschmidt