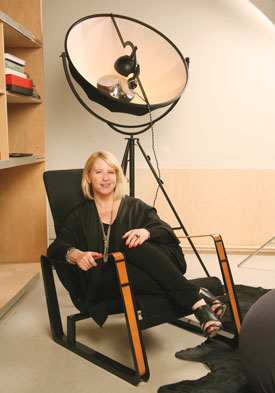 SINCE 1990, architect Jennifer Luce and her Luce et Studio have been going on journeys of exploration that range from historic home remodels to developing modernist corporate compounds for the 21st century. Using an intimate, questioning process that can sometimes find clients writing prose or making mix tapes, Jennifer drills down to the core aspirations and needs of a project. Her award-winning architecture includes workspaces for the imagineers of Disney and Nissan, including the carmaker’s La Jolla and Michigan design studios. She has created signature looks for George’s California Modern and Extraordinary Desserts in Little Italy. With a degree from the Harvard Graduate School of Design, Jennifer also designs furniture (look for her soon-to-launch line) and is an artist who has exhibited at
the Museum of Contemporary Art San Diego and 2012 Venice Biennale. In August, she
will collaborate on a show with ceramicist Yasha Butler at the Luce et Studio gallery.

Q: Does your communication process with a client look and feel the same whether the project is a large corporate job or a residential one?

A: I think that delving into the mind or mindsets of our clients is critical to the process for us. Whether the project be commercial, residential, a piece of furniture or for an institution, the questions are similar at the beginning. And we often ask our clients to create a scenario where they can describe to us where they’re coming from, what the aspirations of the project are.

A: They write us a piece of prose or make a drawing or take a series of photographs. The request is big in the sense that it’s a huge responsibility for the client, and it’s a big thing for us to ask of them. In the end, that document — that expression — becomes often the essence of the answer we’re seeking. There’s an intimacy about the beginning of the process that we sort of warn our clients about in advance, and sometimes it can feel a little uncomfortable. But in the end, it’s so meaningful to everyone, because they’re able to truly express their intentions and their needs and their desires, and we can really respond to them in a very careful way.

Q. Are there hurdles to being a female architect?

A: There are stereotypical images. Those kinds of challenges are definitely something that I’ve had to face, with the question of whether a woman can build, does our brain think that way. I’ve never been frustrated by them, however.

Q: How did you land the Nissan job?

A: I think it’s a very good lesson for any practicing designer to think about every project as being important — critical to clients and to themselves. We were first invited by Nissan here in La Jolla to consider designing a café space that would allow the staff to gather. After asking lots of questions, we realized that the building not only needed that, but also needed other alterations, other shifts in perspective. … And that project led to really thinking about completely redoing the La Jolla facility. And then the success of that exploration turned into a completely new facility for them in Detroit. So you do the project that starts out as one room and ends up as a complete philosophy and two buildings and a shift in the ethos of the design community at Nissan.

Q: There’s a shop section on your website. Are you introducing a line of furniture?

A: Yes, we are, I’m really excited to say. Over the past two years, we have been making a lot of custom furniture on commission. We’ve got some simple but beautiful ideas, and a part of our studio space is going to become a gallery shortly. We’re going to collaborate with artists from all over the world to augment the idea of furniture — what the definition of that is.

Q: What do you think about the state of design in San Diego?

A: I’ve seen a huge evolution in the design community here, not only in terms of architecture, but also graphic design and interior design and the arts community since the late ’80s when I arrived. I think we went through an incredibly active, fertile series of changes right before the recession when people were doing alter-native things that were just so exciting to see. I think the recession has forced us all to just step back for a minute and recalibrate. I can only imagine what the next acceleration is going to be. I’m really excited about it.