On The Right Train 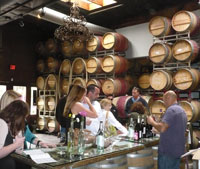 Standing at the train station in Carlsbad, I count 14 people around me. They stand in pairs or small groups and write their names on nametags. I’m alone, but I’m about to embark on a “wine train tour” with them. Marti Bommarito explains how the day will go. She’s been a guide for La Jolla Wine Tours for two years and has completed the level II sommelier course.

Marti provides a history narrative on a portable speaker as she guides her flock to Fresco Trattoria & Bar. A long table in the dining room is set with bottles of wine, breadsticks and place settings. Although it’s 2 o’clock, it’s “early in the day” for strangers to become a group of one. Wine and food help break the ice, as we learn that six people at the table are friends from Colorado, Arizona and California. A young woman from Kentucky is here visiting her friend from La Jolla. Two birthdays are being celebrated, and a couple from Vancouver is celebrating their 10th anniversary.

Marti talks about the Italian wines being poured — a 2011 Castello d’Albola Pinot Grigio, 2010 Da Vinci Chianti and 2012 Michele Chiarlo Barbera d’Asti — as we enjoy the pairing repast of caprese salad, eggplant Parmesan and ravioli with sautéed spinach and cream sauce.

After another narrated, short walk, we arrive at Witch Creek Winery, where we are allowed to select five wines to try. Marti hands out bags that will hold six bottles to make the day’s purchases easy to carry. Before leaving, we get a peek behind the tasting room to see where the wines are made with grapes sourced from points north in California and Valle de Guadalupe in Baja.

Back on the train, Marti directs the tour group into one car and begins a trivia game about wine (i.e., Question: What country still crushes grapes by foot? Answer: Portugal. Prize: a corkscrew).

At Solana Beach, the group disembarks and walks up Cedros Avenue to Carruth Cellars, which already has a handful of visitors. We gather around wine barrels set on end to serve as tables and a gentleman comes around to pour us tastes of Sauvignon Blanc; Chardonnay; Pinot Noir; Tempranillo; a blend of Zinfandel, Syrah, Barbera, Tempranillo and Petite Sirah; and Zinfandel. Carruth sources its grapes from California regions, including Napa Valley; Sonoma, Yolo and Lake counties; and Paso Robles.

Fortunately, Marti watches the clock and let’s us know when it’s time to buy and go. Her sense of timing seems well honed, as we don’t miss a train or have to wait long.

By now, we’re one big happy family — much less subdued than at 2 p.m. We’re talking and laughing like old friends. A fireman from Temecula teaches me a “secret handshake.” At least one member of the group cracks open a bottle of wine (Marti carries a corkscrew and plastic glasses for such occasions). She notes that she’d purchased the wine for someone else, but … well, there it is and it’s another 30 minutes to our final stop in Old Town San Diego.

A short walk from the depot takes us to Hacienda de las Rosas, where again we may select five wines to try. All the grapes for this winery are grown in Ramona. There are three small rooms at Hacienda and an exhibition of photography. The group disperses a bit. Marti sticks around to make sure everyone who needs to get back to the train gets there in time. As 7 p.m. approaches, I make my way to the transit station.

Once onboard the trolley, I pull out my phone and call a friend. Talking when I should be paying attention, I miss my stop. Where is Marti when I need her?

After Shira Bliss lost her job as a mergers and acquisitions consultant in the 2009 recession, she started her own company with Paul Anthony Vild: La Jolla Wine Tours (lajollawinetours.com).

“Our goal in starting the company was to benefit the San Diego economy and create jobs for people, including me,” Shira says. “Now we have several tour guides and office personnel and are helping boost business for wineries and brewpubs.”

The inspiration for wine train tours came from Adam Carruth. After opening a winery and tasting room in Solana Beach in 2010, he put together a map for a self-guided tour of wineries using the North County Transit District’s Coaster train as a mode of getting to wineries up and down the local coastline (wineryrailtrail.com).

“We said, ‘Hey, that’s a great idea. How about we put together a guided tour and bring people to your winery?’” Shira recalls.

Now she’s bringing 40 to 50 people through Carruth Cellars every week. La Jolla Winery Tours pays the tasting fees for each customer, and about a third of those who visit buy wine, Adam says.

Train tours run Monday through Friday, with an average of 10 people per tour and one to two tours per day. About 60 percent are out-of-town tourists, though on holidays more locals than tourists take the tour. The beer train tour stops at The Beer Company, Pizza Port, Union Kitchen & Tap, The Compass and D Street Bar and Grill.