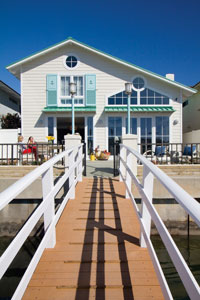 Islanders emulate their idyllic environment after returning to the states

After seven and a half years, Frank and Therese Pallares traded a life on Grand Cayman for Coronado Cays. What they didn’t trade in was the Caribbean vibe.

In 2010, they bought a 1970s house with a dock just beyond the back door and lived in it about 18 months “just to get a feel for it,” Therese says. They then set about renovating it with help from interior designer Brittney Nielsen.

“Frank’s request was that the house be white, but it’s hard to make a white home feel warm,” Brittney says. “[Beadboard] paneling went a long way toward that.” Therese and Brittney interjected accents of color in wallcoverings and furnishings (such as turquoise upholstery on yellow Lilly Pulitzer chairs at the kitchen bar). But the dominant white beadboard ceiling, walls and cabinetry deliver beach cottage style and reflect Frank’s passion for fishing.

The couple met in San Antonio, Texas, when he was working as a cardiologist and she as a cardiovascular technician. After 10 years, they moved to satisfy Frank’s dream to live in the Caribbean. Later, Frank returned to working in the States (flying back and forth). But he tired of the travel, and she missed her family in Southern California.

Today they call their water-front property “the holiday house,” because it’s where the family comes together. Brittney turned a family room into a laundry room, mudroom and large pantry that includes an extra refrigerator and full-size freezer. There are beverage and wine refrigerators also in the dining room.

“The house is for the two of them, but so much emphasis was on entertaining,” Brittney says. “The goal was that everybody could make themselves feel at home.”

Even the powder room meets the goal, thanks to an attention for details such as a Carrara marble trough sink, a Jonathan Adler Anemone light fixture, a porthole medicine cabinet, dyed grass-cloth wallcovering and multifeature Toto toilet — and that’s just in one bathroom.

To bring more light into the house, Brittney chose white laminated glass interior doors, and sky tubes bring enough moonlight into the upstairs hallway that Therese, on their first night in the remodeled home, initially thought a light had been left on.

Architect Jim Ellison ex-panded the space while only adding 113 square feet in the entryway so the front door now faces the street instead of the neighboring house. He did so by raising the roof, turning a garage attic into a bathroom, raising the kitchen ceiling a foot and moving the stairway. Built-in cabinetry also makes the most of living areas.

“We can store everything without having to bring more furniture in,” Therese says.

Having been through Hurricane Ivan in 2004, Therese was adamant about having quality doors and windows. They chose Fenstermann vinyl windows and doors that swing open or tilt in from the top sash, which brings in fresh air but also keeps Therese and Frank’s cat, Mango, from sneaking out.

“Fishy” details include boat/dock cleats for cabinet handles and a bed headboard, a cast-glass nautilus shell window, De Gournay fish wallpaper custom colored for an entryway wall and cast-glass gates with waves and embedded blue stones on both sides of the home’s front exterior.

Artwork includes paintings the owners purchased in the Caribbean (on one wall hung with a pair of boat oars) and a grouping of prints by Guy Harvey based on Frank’s favorite book: The Old Man and the Sea.

And in a clever mix of fire and water, the fireplace surround features a wave pattern mosaic created by Ann Sacks. Therese picked out chips for colors at a showroom in Laguna; the colors and a drawing of the design were then sent to Jerusalem, and the pieces were delivered with easy-to-follow installation instructions.

“We so much loved our time in the Caribbean — the colors, food and lifestyle, but especially the sea,” Therese says, “and we wanted to bring some of that here and reflect the feeling of a Caribbean-style home.”