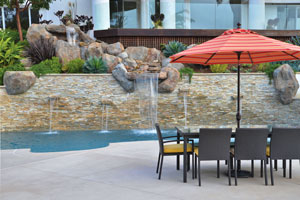 When you hear the words “heaving” and “hard-scape” combined in the description of a patio, it’s not a good thing. But that’s exactly how Brad Woodford of Bradley Landscape depicts his La Jolla client’s pool area before it was remodeled.

“The hardscape was poorly installed,” he says. “Wall footings were undersized and without proper rebar reinforcement. Concrete was poured on soil without proper compac-tion and also did not have rebar. The entire area was heaving and had shifted, causing cracks in the concrete and walls.”

Yikes. A huge chunk of the original wall by the pool was 12 feet tall. You don’t have to be in Jericho to imagine that tumbling down while you’re floating by on an inflatable raft, slurping your third piña colada.

“All of the soil had to be reworked and properly compacted, and new walls were engineered,” Brad says.

About half as tall as the previous, dreary gray granite wall, the pool’s new wall is fashioned of Autumn Gold ledger stone, capped with Southern Buff limestone. It’s better looking; doesn’t totally block the sun; and unites the patio space with the upper-deck spa area, which also had problems.

“Once we began the process of changing out the redwood on the upper deck, we found that the subframing had been installed incorrectly,” Brad says. “It wasn’t pressure-treated lumber, so it had rotted in many places. We ran the new redwood decking parallel, which lengthens the area visually.”

The new deck also cantilevers out over the slope, giving the client an additional 3 feet of space from the house out to the glass railing.

More space was obtained poolside by removing withered palm trees. After all, what’s the point of lazing around the pool if there’s no room for lazing-about patio furnishings? 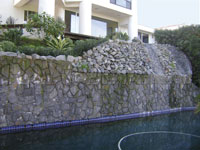 Photo above: A new stone wall in softer, earth-tone hues ties into other landscape elements in a La Jolla remodeling project by Bradley Landscape. Adding patio space by the pool allowed room for more furniture, such as the outdoor dining set shown above from One | Stop Furniture & Patio.

Before photo shown at right.