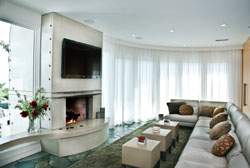 WHEN TIM AND DONIELLE SULLIVAN bought their 1950s Solana Beach home 16 years ago, they were a happy family of three and the residence was a cozy, we’ll-make-do bungalow. A year later, the family became a quartet with the addition of another son; and, not too long after that, they were thrilled by the birth of their daughter. The 1,800-square-foot residence was a little too cozy for five people.

“The house had a master bedroom and shower — no bathtubs,” Donielle says. “It had an office, and there was one guest room. Although it was functional at the time we bought it, we knew we didn’t have enough space for a growing family.”

“It’s the story of our evolving family in size and need and in relationship to the house and how we planned to use it,” Donielle says.

The first round was mostly about size. They gained 1,000 square feet by expanding into the back yard and patio area, adding a family room, two bedrooms and a bathroom.

“We weren’t going to touch the master bath; but because of a plumbing issue, we ended up putting in a deep-soak tub,” Donielle says.

“Unfortunately, it was made of highly flammable fiberglass; and when I put a candle on it, there went the second bath!” (The subsequent redo won the grand prize in SDH/GL’s 2011 Baths of the Year contest.)

The second phase was mostly about how they planned to use the house, which meant that the guest room, kitchen and family room needed tweaking.

The lack of an attached bath made the guest room no longer workable, as Donielle and Tim’s parents, now getting on in years, were visiting more often and staying longer. To create a fully functioning, long-term guest room, part of the space was turned into an attached bath and a powder room off the family room.

“This meant the boys needed to cohabitate; so in their 15-by-17-foot room, we placed Murphy beds and have running ladders throughout the entire room to access bookshelves up top,” Donielle says. “When we are empty nesters, we can make it a workout room, but still pull the beds down if the boys visit.”

Donielle loves to cook and is one of those welcome-you-with-open-arms types who live by the adage “the more the merrier,” which often means multiple chefs roaming the kitchen. She wanted an expanded kitchen that would be a joy for much more than her own family.

Rejiggering the kitchen layout ensured plenty of room for friends, neighbors and Donielle’s cooking group to “create food magic” on updated appliances that would make any recreational cook green with envy. Even professional chefs would be pleased with the 60-inch Wolf range with six burners, a grill and griddle; the large Sub-Zero refrigerator; and the upright freezer.

Wraparound cabinetry that extends into the dining area and hallway keeps cooks and helpers from running into each other. Housing a microwave and coffeemaker in the hall cabinets creates a friendly mini café bar. In the dining area, cabinetry hides a television, DVD player and music system, providing anyone sitting at the dining room table with instant entertainment.

“The new cabinetry is riff-cut ash, which is the same wood that’s everywhere in the house,” Lena says. “Tim and Donielle really loved this wood, but it was a challenge for the cabinetmaker. The cabinets go very high, and they are voluminous. We were very fussy about the wood grains lining up properly, and that was tricky to do. If they hadn’t lined up, though, the kitchen wouldn’t be as stunning as it is.”

Besides harboring a love of cooking, Donielle and her husband are wine enthusiasts. They wanted to add a wine room without adding a second story. The family room turned out to be the solution.

“The family room was a very deep, awkward space and had been built oversized,” Donielle says. “It kind of needed two groupings, but not quite. We had stuck a piano in there as a filler for a while, but the room never pulled the adult audience in. It wasn’t a go-to place. By taking back 6 feet of it, we were able to add a linear wine room with a glass facing.”

Climate control and a roll-down shade protect the wine. When the shade is rolled up, it creates a fanciful backdrop of a glassed-in wall of wine that’s uplit and looks like a mural for the family room.

On the other side of the room, a slate fireplace that was installed during the first phase of the remodel was switched to concrete in the second phase.

“The fireplace redo was a big part of the remodel of that room,” Lena says. “Tim and Donielle are really into raw materials; so we had fun with concrete and metal, which we purposely rusted, then sealed so it wouldn’t rust anymore.”

“It added a huge design feature in the room,” Donielle adds. “The two fireplaces [one inside, one out] are connected through the window glass so that it feels like one structure. That sets the tone for the way we live in the house, with no delineation between one space and another.”

The key to the outdoor fireplace is that, unlike many homes where the fireplace sits too far away from the house for consistent use, this one is adjacent to the residence.

“Right when you walk out the door, there it is, so it becomes another gathering space,” Donielle says. “We spend endless evenings out there.”

Now there are plenty of go-to spaces for get-togethers. When the grownups take over the family and wine rooms, the kids can opt for either their bedrooms or the living room. Pocket doors ensure privacy.

“On a normal Friday night,” Lena says, “the place is full of people, neighbors and kids. They often do fundraisers on Friday nights; that’s Donielle’s hobby. Everyone is doing some-thing in the kitchen, cooking, chopping — even the kids are doing some things. People are hanging out in the family room or on the patio. It’s a fun environment.”