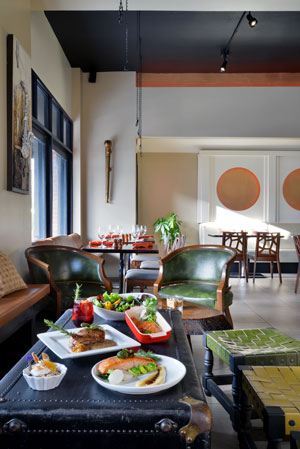 THE NEW, NEIGHBORLY and very hip Heat is not so much hot as more accurately warming up.

Formerly home to the cozy and gritty Urban Grind coffeehouse, the building has been transformed into a whitewashed rectangle accented with neon light. Orange light spreads from an entire wall designed to look as if an intense sun cracked it. Along another wall, spherical niches emit the glow of an orange sunset. Taken together, the décor is edgy, odd, modern and cool.

Heat functions as a bar and restaurant. Because its license is for beer and wine only, there’s a limit on libations offered at the smartly designed bar. As for food, the small menu provides just over a dozen items and focuses on locally sourced ingredients whenever possible. The menu is expected to change on a quarterly basis. There are snacks, appetizers and entrées with standouts in each category.

The Charcuterie Board is one of the clear winners among the starters, offering savory tastes of outstandingly cured meats. Toasted quinoa and faro is a delicious appetizer that looks rather like a Manny Farber painting with scattered beets, dates and olives strewn on a bed of grains. Among entrées, the Heat Burger with bacon jam, peppery greens and fries is top notch. Most other entrées easily fall into the “good” category and include churasco steak, roasted chicken and grilled salmon — in that order of satisfaction. The real advantage of Heat is that it’s an amiable neighborhood restaurant on a block otherwise absent anyplace for dinner.

Service: Extremely pleasant, but often scattered. Servers seem not particularly knowledgeable about the food, and dishes may appear more rapidly than silverware.

Parking: Almost entirely street parking, though a $1/hour lot is down the block.

Special Diets: While not abundant, options are available for vegans, vegetarians and the gluten intolerant.