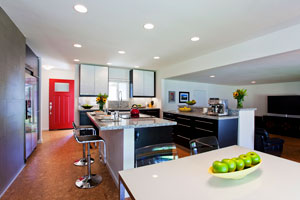 A BUDGET-FRIENDLY REDO IS FIT FOR A HERO

DESIGNER CHERYL HAMILTON-GRAY typically works in the luxury market, but for a young couple in Carlsbad, the biggest criteria for their kitchen remodel was budget.

“We took on the challenge with gusto,” Hamilton-Gray says. “The husband, a Marine, is a family friend who had bought a 1950s bungalow fixer-upper to work on long term. Then he was deployed to Afghanistan, was injured in a heroic act and lost his left foot and use of his left arm. We pooled our design and contracting resources so we could help remodel his home to cope with the walking aids necessary between surgeries to eventually fit a prosthetic.”

The home’s uneven combination of peeling vinyl and tired carpeting were precarious for rehabilitation needs. Replacing those with inexpensive cork panels provided a safer, smoother, more resilient surface. An extra bonus was that the cork’s earth tones warmed up the chosen black/white/gray color theme.

“Another important factor in the flooring selection,” the designer says, “was that we needed a forgiving surface for the couple’s big, slobbering, but lovable, four-legged child: an English bulldog.”

As this was a pro-bono project for the wounded Marine, vendors generously provided low-cost materials. “A granite distributor heard of our plight and offered us his overstocked Luna Pearl stone for a song. We used it on the countertops and backsplash, and the combination of our simple color palette really pulled it all together,” Hamilton-Gray says.

Cabinetry also was chosen for its low price point. “We wanted a simple, flat-panel door in a contemporary finish and selected the chocolate-stained oak, flat-panel doors resembling the more fashionable wenge wood look,” the designer says. “To offset this, we installed glass-fronted wall cabinets flanking the sink window so the eye-level effect was softer.”

Removing walls between the living room and kitchen and replacing them with a pony wall opened up the space while maintaining a backing for base cabinetry. A larger, more accommodating island was installed as well.

“The changes allowed us to combine the tall storage elements in one location, leaving the rest of the kitchen open for base and wall cabinetry storage,” Hamilton-Gray says. “The flow also improved with generous thoroughfares around the island.”

Lighter, brighter and more open now, the kitchen has a crisp, contemporary aesthetic; and the final tally for this precedent-setting remodel was just over $13,000.