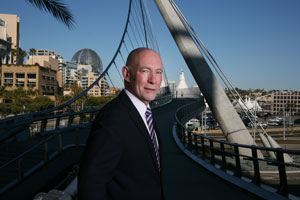 THE ADVOCATE
Q&A WITH BASTIAAN BOUMA

BASTIAAN BOUMA, executive director/CEO for the San Diego chapter of the American Institute of Architects, admits he has a “puzzler” of a name, but it’s no mystery what he would like to see happen with the advocacy group he began leading in November.

The Canadian-born son of Dutch immigrants plans on increasing his membership by 25 percent (it currently numbers about 800), as well as raising the group’s profile in the community at large. He brings a distinct blend of skills to the task, including a law degree and experience in international trade and tourism as a member of the Canadian Foreign Service. Prior to his arrival in San Diego, he worked with the Chicago Architecture Foundation, where he was responsible for large-scale public programs, including Open House Chicago, which shepherded more than 40,000 people through architectural sites around the city.

Q: You lived in San Diego for a short time about 20 years ago. What’s your take on how the city has developed since then?

A: I’ve been knocked out by how great downtown looks. It’s not like it’s problem-free, but the inventory of new buildings is really encouraging. And it kind of creates a new neighborhood here: a downtown neighborhood of working people who are embracing city living. I know there was probably a little bit of overbuilding during the boom years. Nevertheless the secret to Chicago’s revitalization was its ability to attract full-time residents downtown.

Q: Do you have some favorite buildings?

A: There’s really a great collection of vintage, pre-Second World War buildings downtown. … I’m a modernist by instinct but I think it’s very valuable to punctuate your urban environment with historic buildings — provide a context. Architecture is a cumulative art and science. New buildings don’t just pop out of nowhere. They come from a long legacy in engineering and design and materials, and it’s important to have representative historic buildings that can show the public and designers “This is where we come from; this is where we’re headed.”

Q: So are you a strong preservationist?

A: I recognize that preservation is a good value, but buildings just can’t all be turned into museums. They need to be used in commercial ways. There’s an axiom from the 19th century — it’s a little brutal, from Chicago — which is that buildings are machines to make the land pay. … It’s kind of a cynical approach, but there’s truth to it. If you can’t find an economic purpose for these historic buildings and even newer buildings, they’re at risk; and that’s why adaptive reuse is such a great concept and has worked so well in Chicago.

Q: A year from now, what will success look like for you?

A: I would like to see our membership more engaged in the community discourse about architecture and design through formal mechanisms, either serving on commissions and boards or being active with community groups. So a speaker’s bureau and that sort of thing would be a goal. … At the moment, our “find an architect” tool on our website isn’t as effective as I’d like, so we’re very soon turning our attention to improving our communications tools with the public to make it easier for people to find firms and individuals that might be suited to their projects. We’re also wanting to re-establish our relationship with the mayor’s office and the civic leadership and to make ourselves part of the toolkit available to government — government officials and elected officials — as they move forward with thinking about where San Diego is headed for the next decade or two decades or three decades.

A: Architects are kind of a combination of art and science, and they’re men and women who feel like they’re wearing the white hat. They want to do good things; they want to do good work. They want to be successful, and they’re not cynical. Many of them are young. I’ll tell you, architecture and design for the past four or five years has been a pretty tough business. Large numbers of people lost their jobs or were forced to downsize their practices. … Yet a lot of these young people in particular remain enthusiastic and have no second thoughts about their career choices. … That kind of emotional commitment to their careers I find really attractive personally, because I tend to be an enthusiast myself; and I love to see that in the people that I’m serving and working with.