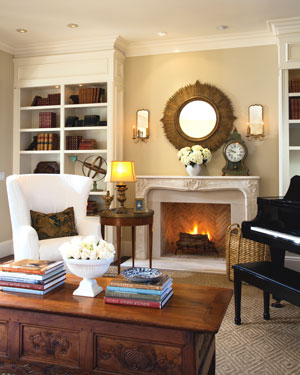 IT WAS TO BECOME A PLACE WHERE DREAMS ARE STORED. The property Eric and Sara Wardrip bought in 2010 was the first home built in Fairbanks Ranch in 1980 by, as Sara describes her, “a woman of great style from Pasadena.”

It had caught Sara’s discerning eye immediately, but the floor plan was most of what eventually endured when the Wardrips finished remodeling the home to their vision. Now 5,000 square feet, it is a two-story, four-bedroom/five-bath residence lovingly accented with antiques.

“I change my style endlessly,” says Sara, owner of C’est La Vie Antiques; and this was to be her updated, edgier refuge since the Wardrips moved from their Santa Barbara/Spanish-style abode.

The all-white kitchen she envisioned, with bistro lamps and a ladder, had to accommodate her collection of 18th century pewter tankards, willow ware, Welsh platters and Italian tobacco jars from the 18th century.

During the renovation, the Wardrips had the doors raised, ceilings built to 9 or 10 feet and custom baseboards and wide-plank walnut floors installed — all to serve as the proper scale for her passion for French and Swedish antiques.

Never stuffy, the interiors are outfitted with washable slipcovers over all of the upholstery — decor that accommodates their children (they have a 4-year-old and a 22-year-old) and dogs — and Stark sisal rugs throughout. Though her shop owner’s aesthetic eye tends upward, toward slightly more formal designers like Phoebe Howard and Suzanne Kasler of Atlanta, Sara pursues casual San Diego style in her own home.

Farrow & Ball paints throughout set the peaceful background tone. Most of the furnishings and accessories tend to be 18th and 19th century antiques, a period Sara grew to love while working in an antique store in British Columbia during college.

There is a sense of mystery in the rooms she’s decorated, with a somewhat musical game of furniture — as in “here today, gone tomorrow” — prevailing.

“My husband may leave for work with one dining table in place, only to return later to find it sold to a fan of the shop and a new one moved in,” Sara says.

C’est La Vie Antiques debuted in Del Mar 14 years ago and by 2007 had outgrown its space and moved to its current warehouse in Encinitas, a shopping destination for many well-known designers from Los Angeles and San Diego who occasionally stay for a design talk or book signing.

Sara and Eric, an anesthesiologist, make three or four buying trips a year to France, oftentimes adding the United Kingdom or Italy to their itinerary for good measure. While they love to entertain, mostly for the benefit of their William Wardrip scholarship foundation for high school seniors, they consider themselves basically homebodies.

Fireplaces in the living room and family room are 19th century French limestone beauties that transform the interiors. Toasting their feet before the hearths in comfortable chairs, the Wardrips can savor the tenderness and respect that lingers in the repurposed antiques Sara gathers around her.
Even the table lamps are reconfigured French urns and pottery with custom shades.

Sara also loves to garden among the roses and peonies beyond the mullioned windows, but mostly,
she says, “I just enjoy this house I’ve lavished my passion on. It feels safe, happy and comfortable.” She says this as she eyes another spot for a recently arrived treasure from the continent — one that’s just perfect to bring home.