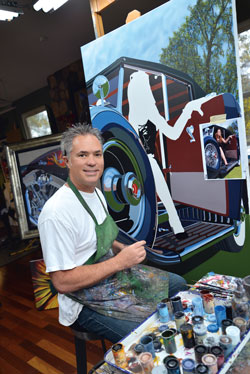 IN JUNIOR HIGH SCHOOL, Scott Jacobs doodled on book covers during class. By age 19, he opened his first gallery. Now, after living in California for 17 years, Scott creates photorealistic paintings for a living. Although he keeps busy with worldwide travel and a two-year waiting list for his artwork, he took time to create a painting for the ninth annual La Jolla Concours d’Elegance (April 5-7). This is the third consecutive year he has done so.


“I just make the time,” Scott says in his Rancho Santa Fe studio. He enjoys participating in this event to keep involved in the community. In previous years for this event, his acrylic-on-canvas paintings have been closeup shots of classic cars — the first being a Mercedes and the second a Ferrari. The first snatched $85,000 and the second $72,000 during the Concours’ auction.


“I didn’t want to do the same thing again,” he says. “I like paintings that tell a story.”


The new painting, which is on a 40-by-60-inch canvas, is based on an image of his daughter climbing out of a 1930 Duesenberg. His intention was to create a painting of her taking a photo of the car — as if she was attending the event. However, Scott thought the car seemed too overpowering to have that much action going on in one painting and decided the simpler movement of getting out of a car would have a greater impact.


Using old film canisters, Scott mixes and stores precise hues of paint needed to complete each project. He paints daily for nine or 10 hours using a size 0 brush; each project takes more than 100 hours to complete. The originals of his Harley-Davidson paintings sell for anywhere between $40,000 and $150,000.


Scott attends about 50 inter-national shows per year, his favorite location being in Greece.


“The hardest part about traveling so much is being away from family,” he says. His wife, Sharon, goes on only a few of the trips. “She likes to cherry-pick the trips,” he says, smiling.
Scott will be present at the Concours d’Elegance on Friday night and Saturday to sign posters and his new book, The Art of Scott Jacobs: The Complete Works. Posters from the last two years also will be available for purchase.