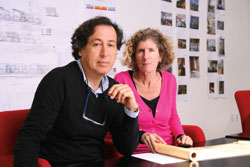 FROM MASTER CITY PLANNING IN CHINA or designing infrastructure in Qatar to renovating a tiny San Diego library or creating a shipping container-sized artist’s studio, it seems no job is too big or too small for the husband-and-wife architectural team of Ricardo Rabines and Taal Safdie. Their portfolio includes a remarkable breadth of work, including the mixed-use Mercado del Barrio in Barrio Logan; the inspiring residential design known as the Tree House in Mission Hills; and Harbor Drive Bridge, one of San Diego’s newest architectural icons. Raised in Montreal, Taal is the daughter of renowned architect Moshe Safdie, whose landmark architectural experiment in affordable housing, Habitat 67, was her childhood home. Ricardo, who grew up in Peru, met his wife when they attended the University of Pennsylvania. They and Moshe Safdie worked together on UCSD’s Eleanor Roosevelt College.

Q: Having worked on the Mercado del Barrio project, what’s your take on the neighborhood? Some have complained that Barrio Logan development isn’t happening as envisioned.
RR: I don’t know why they say something like that. I think that probably the big expectation was that it would sort of go off the way that downtown was going. I don’t have the image that it could be a downtown, an entertainment area, a sort of SoHo or something like that. We didn’t expect it to be like that at all. I think that we wanted this to be still a place for the people who live there. … The community has been waiting for this project for 20 years; and now finally it’s being done, and we’re very privileged to be involved with a project like that.

Q: What do you think San Diego’s architecture says about the city?
TS: Well, I think that historically it says that it didn’t really care about architecture that much. But I think that you can see that San Diego’s really changing and its priorities are changing. When we moved here 20, 21 years ago, it just didn’t seem like there was that much emphasis on good civic architecture. There was very little to speak of, and I think that’s changing. Sometimes I think that the climate has a little bit to do with that; maybe it was a sense that it was more a transient place.
RR: A vacation place, solely a destination city for everybody. So I think that reflects in the architecture. When we moved here, we kind of felt everything was sort of done in temporary materials.
TS: Always done on the cheap.

Q: Taal, you grew up in your father’s Habitat 67. What kind of influence do you think that has on your work today?
TS: The funny thing is that when I was younger, living in Habitat, I was more upset by the fact that it was away from all my friends and that I had to take the bus to get to my school. I always appreciated the building, I have to say. Even as a child, I remember standing and looking out at the different views and the gardens. So it’s not like I was
at all immune to it, but it’s funny what you’re more concerned about when you’re 13.
RR: I think this whole thing is about proper shelter and that you grew up in a place that was a big example in the world about a high level of design standards. That definitely helped create an interest. Certainly there was a lot of idealism about giving a house to everybody.

Q: The Brazilian architect Oscar Niemeyer believed architecture was political. Do you think so?
RR: [When we began our practice], we felt that we really needed to work in public work. We needed to do public work because it’s a social context, it’s political. You need to be responsible toward the development of cities and toward people in general; and if we don’t participate at those levels, we just become sort of an artist for a certain group, for elite kind of work or boutique type of work. And that’s not what we want to do. That’s why the affordable housing at the Mercado project became so exciting for us.

Q: What’s the key to managing a marriage and a business together?
TS: There’s no line between work and fun for us; it’s all the same. We never feel like we’re going to work. Your whole life is about architecture if you’re an architect. There’s no way to really stop it;
it’s just all consuming.
RR: It’s a style of life.
TS: I think it makes life a little bit easier, because then you can share it on all different levels.