2013 Baths of the Year Winners

WHETHER IT’S SINKING BLISSFULLY INTO A TUB or basking in soft, restorative light, you can’t beat a soothing bathroom at the end of a long, wearying day. The thoughtfully designed bathroom can make all the difference in the morning, too, when the challenges of a new 9-to-5 beckon. These four custom bathrooms, each fashioned to meet their homeowners’ individual needs and visions, have one important component in common: They’re sanctuaries — places in the home to relax in privacy and comfort. 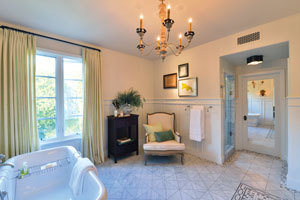 “MY TWIST IN MOST PROJECTS THAT I WORK ON is taking the existing style and giving it a nice clean feeling,” designer Kristin Lomauro says. “I always try to add some detail that reflects something a little more modern.”

Her client in the Del Mar Heights area owned a Tudor-style home, “a charming space, from the garden all the way through. I just took the flavors of her existing house and finished the bathroom,” Lomauro says.

“There was really basic white tile and a huge spa tub taking up most of the floor space,” she recalls. “We knew that [the homeowner] wanted a freestanding tub, and we knew we needed to give it some charm.”

The focal point of the bathroom is a replica of a solid marble tub from Europe. Next to the tub is a comfortable, wingback chair covered in linen. “My client actually sits in it and reads,” Lomauro says. “She relaxes and enjoys her space.”

Other features include a marble sink, an iron and wood chandelier, scallop shell-shaped sconces on the wall above the tub, mosaic tile on the floor, vintage mirrors, French window frames and hand-printed wallpaper in the water closet.

Judge Kathleen Zbacnik praised Lomauro’s “excellent use of various lighting levels and excellent choice of fixtures for the room’s architectural style,” while judge Lena Brion cited the “Old World charm” and details that “take one back to Grandma’s house.”

Above: A custom iron and wood chandelier contributes to the Old World motif in this Tudor-style home’s bathroom 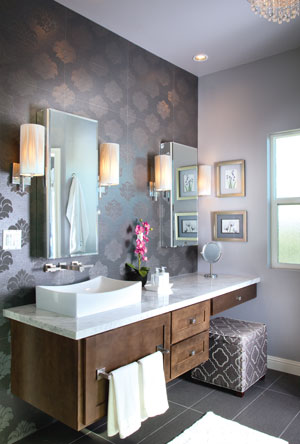 “I couldn’t say no when I heard her story,” says Michelle Strausbaugh, principal of Reveal Studio, about a client who turned out to be particularly meaningful for her. The woman had lost her entire Lake Elsinore home to a fire. “She is the reason I do design. I feel that spaces can help people heal, and she was someone who really needed that,” Strausbaugh says.

Part of the rebuilding process was the creation of a master bath designed “as an escape — a place to find peace in the midst of the chaos,” the designer says.

To that end, she selected a deep whirlpool tub with space for candles. Body sprays — created in a soothing palette of grays and whites, with a hint of purple — and a bench in the shower provide “a space to help heal the body and also heal the mind.”

Collaborating with her client, Strausbaugh came up with the concept of integrating simplicity with luxury.

“In this bath,” Strausbaugh says, “modern elements are seen in the straight countertop and slab-door cabinetry, while damask wallpaper, vertical tiles and crystal hardware add glamorous touches. It’s taking modern and giving it a little bit of showiness.”

Judge Kathleen Zbacnik observed, “As someone who knows firsthand what it is to lose one’s home to a fire, I compliment the designer on her choice of materials and colors. She created a calm and healing retreat for her client.”

Above: Wall sconces and recessed lighting, combined with damask wallpaper, distiguish the vanity area of this Lake Elsinore home’s bathroom. 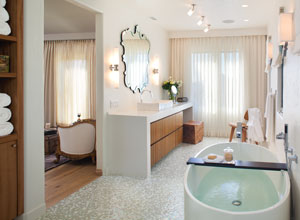 THE MASTER SUITE BATHROOM in a 1930s Spanish home in Point Loma was 7½ feet wide and 27 feet long. As she took up this remodel, designer Anita Dawson recognized a challenge:
“We couldn’t rearrange walls.”

“To combat the feeling of a bowling alley when you walked into the master bedroom, we added some arches to break up the hallway, and we did move the opening to the bedroom so there’s a cool sightline to the tub,” Dawson recounts. “Then we took out the cabinetry and the weird sunken tub, replacing it with a freestanding one, and put everything on one wall. It opened up the whole room.”

Solid shower walls were replaced with clear glass, and lighting fixtures were upgraded. “We resurfaced everything with one kind of tile so that it was very unifying,” Dawson says.

Her client also wanted the remodeled bath to sparkle, literally. “She’s very artistic, very spiritual; and she had a definite look that she wanted from the beginning. I found that every time I would show her something, she really liked sparkly,” Dawson says.

“We needed to have that kind of crystalline feeling that would go well with the bedroom, which has an almost rustic, French look.”

Locating just the right tile (and at an affordable price) produced a bathroom that is “super-sparkly,” Dawson says, “like a little jewel box.”

“This is my favorite bath,” praised judge Lena Brion. “A wonderful combination of modern luxury, glamour and refined elegance.” 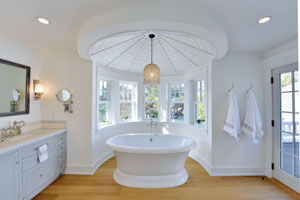 LISA INNS OF GREY COAST DESIGNS had a vested interest in the master bathroom project for this five-bedroom, five-and-a-half-bath home in Solana Beach: It’s her house, where she resides with her husband and four children.

“When I approached this bathroom,” she says, “it was with the thought of incorporating all of the things that I love. For me, this was something I wanted to live with for a long time.”

Given her hectic household, Inns envisioned the master bath as a “rejuvenation center” for herself and her spouse.

It starts with a freestanding, therapeutic bath, which judge Kathleen Zbacnik called “a great focal point when walking down the hall.” An acupuncturist designed the tub’s jets. There’s also a steam shower for two equipped with polished nickel, wall-mount fixtures and a waterfall.

This bathroom is an organic mingling of new and traditional.

“I wanted the whole space to look timeless,” Inns explains. “I didn’t want it to look like a brand-new home. I wanted it to have some patina. So the vanity has mild distressing, while the medicine cabinet is a little more urban.”

Skylights, French doors and double-hung windows add light. “The house is fairly close to the ocean,” Inns says, “so for me that kind of organic element came into play. I like the home to feel warm and inviting.”
This bathroom “creates a drama that is enticing,” said judge Lena Brion.

Above: The centerpiece of this Solana Beach bathroom is a jet powered therapeutic tub, from which one can also bathe in the room’s natural light.

Baths of the Year: By David L. Coddon