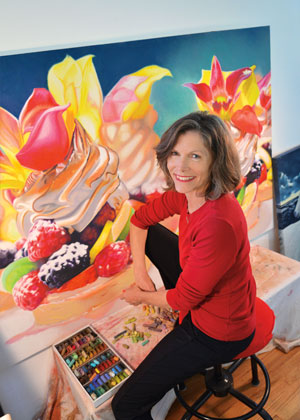 AS A PARTICIPANT in Chalk La Strada, the street-painting festival held each autumn in Little Italy, Barbara Stanley rubs her fingers raw, pressing pigments of color into asphalt — making a masterpiece of art that, like a sandcastle at the beach, eventually washes away. But a recent work is here to stay.

“Karen Krasne called me out of the blue a couple of weeks before the festival,” Stanley reports. “She said that she and her husband, Jamie, wanted me to do something in front of their Extraordinary Desserts store on Union Street to coincide with the festival.”

That something turned out to be an inspirational piece of chalk art depicting one of Krasne’s luscious fruit tarts. Swirls of red mix with whipped butterscotch tans, yellows mingle with luscious lime greens and dark teals meld with brilliant pinks on a 6-foot-by-4-foot canvas.

“I’ve known Barbara for 22 years, and she’s a talented artist,” Krasne says. “Her use of colors is really spectacular, and her attention to detail — gorgeous. At a marketing meeting just before the festival, we decided we should do something unusual for the restaurant, and my husband suggested Barbara’s work would help attract people to the restaurant during Chalk La Strada.”

Now that the festival is over, Krasne is uncertain as to where she’ll be able to showcase the artwork because it is so large. But Stanley isn’t too concerned. She just had fun doing it.

“I love color so much, and Karen’s desserts are so beautiful that they are a work of art in themselves. It was like me copying the Mona Lisa. Well, much more luscious than the Mona Lisa — more like a Van Gogh with the color.”