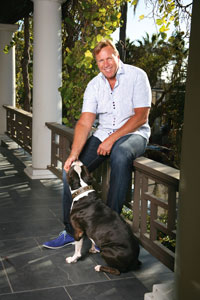 San Diego Home/Garden Lifestyles offers its deepest condolences to the family, friends and colleagues of architect Graham Downes, who died on April 21, 2013. We have lost a leading light in our community. His rise to pre-eminence in hospitality architecture, locally and internationally, was recognized in our February issue.

FROM LODGINGS LIKE THE HARD ROCK HOTEL AND TOWER 23 to restaurants and nightspots including Basic and Thin to reclaimed gems such as the Wonder Bread Factory, architect/developer Graham Downes has made his mark with some of San Diego’s most design-forward projects. An admirer of the Bauhaus modernist movement (hence the “haus” appended to the name of a number of his buildings), Downes practices internationally (he is working on a casino resort in Jamaica) and is licensed in Great Britain and his native South Africa. A former rugby star, he also hopes to spur inspired development of his own Bankers Hill neighborhood.

Q: Would you say you have a signature style, or is it always evolving?

A: It is evolving, but there are a few things we do as a matter of purpose and consciously. I try to make sure every time we put a mark down somewhere that we make it a very big, powerful gesture for that space or building and that it isn’t just an also-ran that becomes unnoticed. So many times, consumers accept that; they’ve been trained now.

Q: How can you avoid being an also-ran?

A: All these great designs around the world, just Google a few words, you’ll find them and that means you’ve found ideas. And that means you’ve found ideas that you can copy or leverage or lift and reapply, so now it’s made all our jobs much more challenging. And that’s not a bad thing; it does make the world a better place, but it does raise everybody’s expectations.

Q: You voiced some pretty negative opinions about Mission Hills and several other neighborhoods a few months ago. What kind of reaction did you get to those comments?

A: I don’t think I should have had such a heavy opinion about places, and maybe I got some flack. I don’t really care, because I still believe those things. But maybe the way they come across might not be good for me, because it would be construed to be arrogant or disrespectful or whatever. I think it’s about the houses in Mission Hills where it’s almost like a museum — everyone walks around like really in a bubble. Where my house is there are hardly any garages. There are often cars on the street, and there are a lot of real beater cars on the street. Sometimes there’s the odd camper that’s there longer than it needs to be, and oftentimes there’s noise on the street. And it’s a multimillion-dollar house. It’s the biggest house in the downtown area code, by the way. But I don’t care at all, you know? I actually embrace the diversity, and I think that’s what makes a characterful environment, as opposed to a sterile one.

Q: So you won’t be moving to the suburbs anytime soon?

A: We have this American dream; or we’ve been told about it, so we feel like we have to have this big house and have all these things. Ultimately, it might take a long time for a lot of people to realize it limits your ability to travel and do other things when you build these compounds around yourself. You limit your whole mental expansion when you have to clean the pool and you gotta do this and you gotta fix those things. And then you’ve got five different toys in the garage that you never use, and you just fill your life with clutter. It didn’t make you a better person or even have more fun, if happiness is important to you. So being in an urban environment is so critical to a higher, more-civilized, better-educated race. I think the more we learn to be in contact with each other, we’ll be much more tolerant.

A: Integration is a big word for me because, of course, I come from a world that was criminally segregated, so integration to me means people having better access to each other. The environment that I left, one of the primary reasons was because segregation is a very damaging thing. There’s integration that also could be with use. It’s really fun when you walk through a retail store and there’s a restaurant in the back. It’s really fun when you walk through a restaurant and they’ve got some retail going on, and then maybe there are some rooms upstairs and maybe there are just unexpected things. Everyone’s just getting along, and then it kind of feels a little bit like some other place. Everything should not be as it always has been and as it’s expected to be. I think that’s when you end up dumbing down society.